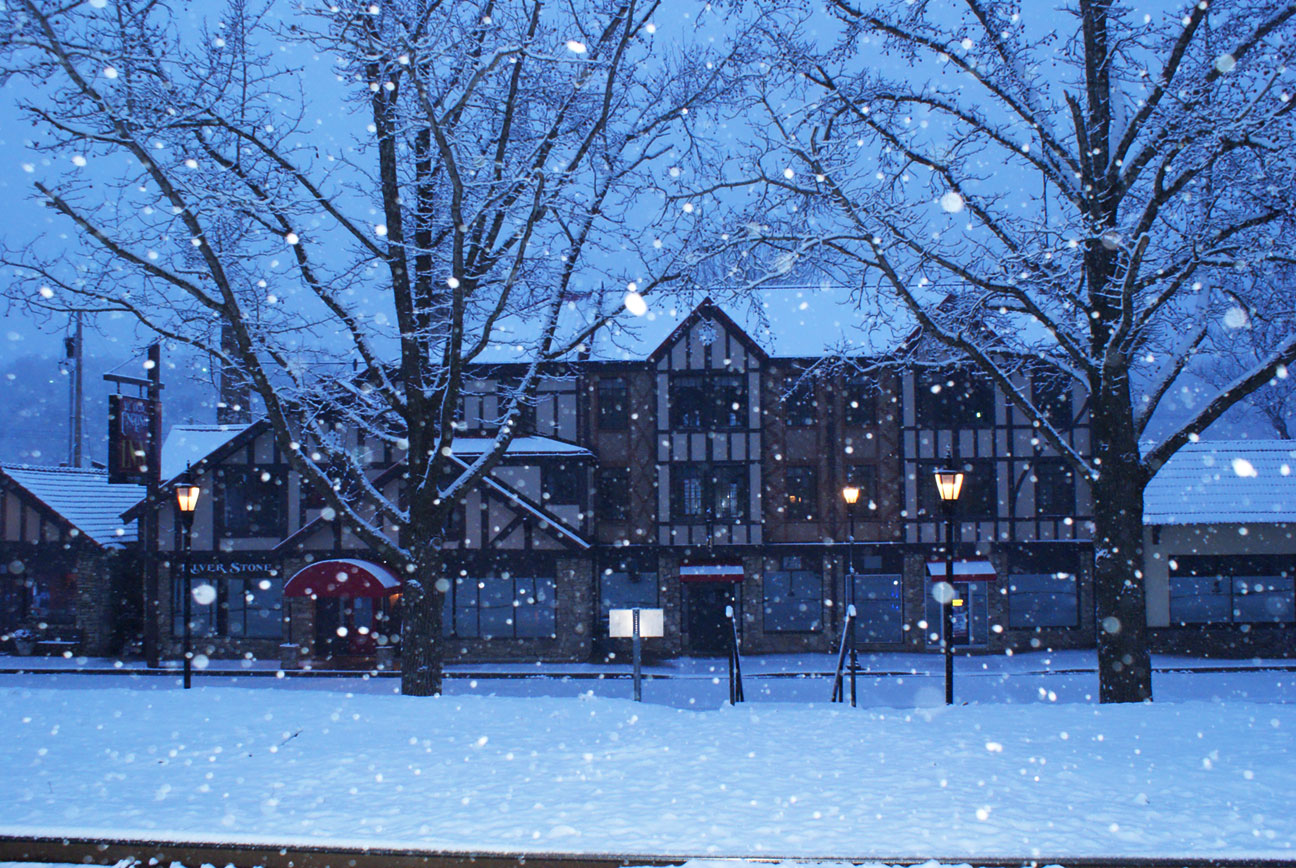 To understand the history of Ye Olde English Inn, it is best to begin with the vision of William H. Johnson. Johnson came to Taney County after the discovery of zinc and soon turned his gaze to Hollister.  “Johnson looked upon a lovely valley nestled between sheltering hills and envisioned a picturesque English village worthy of this setting,” wrote Edith McCall in her 1969 book English Village in the Ozarks: The Story of Hollister, Missouri.

But perhaps the story begins with the widow Malinda Fortner who purchased 120 acres along Turkey Creek in 1878. Her acreage now comprises the heart of Hollister. Two mining booms followed. The railroad came through Hollister.

However, the current Tudor-style English village would not be built until 34 years later.

After the mining booms, the town came together somewhat haphazardly. A railroad station was built in 1910. The same year that town was incorporated and J.W. Blankenship became the first mayor. The station was designed by a man named Tarbott (who was later responsible for fulfilling Johnson’s wish for a Tudor village. The station — which still stands, became the pride of Hollister as well as the Missouri Pacific Railroad Company.

Johnson believed the future of the town would be closely intertwined with the railroad. Although Broadway Street ran parallel to the railroad tracks, all of the buildings faced away from the tracks. Johnson enacted a plan to turn the face of the town around with businesses opening toward the rails and the newly crafted and appropriately named Front Street.

Tarbott got started on a bank  facing Front Street. The bank was completed in 1912.  Six months later, Ye English Inn was built immediately adjacent to the bank. The Inn included a drug store and a dining room in the space that is now the Black Horse Pub. Production was overseen by William H. Johnson’s son, William W. Johnson.

The elder Johnson saw to it that the town was properly manicured and even convinced the Missouri Pacific Railroad to send a professional landscaper. This landscaper was charged with maintaining the area around the station and along the new city sidewalk — the first in Hollister — that ran from the tracks to the town. At the same time, downstream on the nearby White River, the Powersite Dam was constructed to provide flood control and rural electricity.

As these changes took place, Ye English Inn became a prominent locale. During the 1920s, the inn prospered as the city flourished.

That all changed, however, with the flood of 1927. Powersite was supposed to protect Hollister from flooding but it did not work. There are still watermarks halfway up the walls of the hotel from the 1927 flood.

The year of 1927 marked the beginning of a slow decline for Ye English Inn and the other businesses on Front Street. Major floods would continue to affect the downtown area in 1943, 1945 and 1950. During the flood of 1943, Mayor Townsend Godsey even rowed a canoe into the lobby of the Inn!

Highway 65 — built over old Broadway Street — became the major thoroughfare in town. Johnson’s gamble to make the town successful by integrating it with the railroad had failed. Ye English Inn was now isolated from the casual traveler.

The hotel managed to stay open to a meager trickle of business through the 1930s and 1940s but its proprietors were forced to abandon the property in 1951. As windows were broken and old curtains fluttered in the breeze, Ye English Inn became a silent watchmen of sorts for the city of Hollister, uniquely intertwined with the town’s fate.

Table Rock Dam was completed in 1958 and major flooding in downtown Hollister was all but eliminated. In time, Hollister became more desirable real estate. Businesses began to move back. The empty warehouse next to Ye English Inn became a Coca Cola bottling distribution point.

As it was with William H. Johnson, it was outsiders who again saw the potential of Hollister. Paul Jamison began remodeling some of the buildings on Front Street. Elijah C. Kirtley had fallen in love with the old idea of an Old English village in the Ozark Mountain. To further solidify the Old English idea, Kirtley proposed re-naming Front Street to Downing Street (after the famous street in London). Ye English Inn Corporation was founded in 1967 to return the inn to its former beauty. Builders Bruce Orton and Ed Jones sold stock to those in the community in order to build funding.

A renovated Ye English Inn re-opened six months later. Other businesses began to open as well. One such business was Paul Jamison’s bookstore, located in the old bank building and named Number 10 Downing Street. A new bowling alley moved in as well. However, over the next three decades, the Inn was managed by a variety of owners, opening and closing several times, and slowly slipping back into disrepair.

In 2010, best-selling author Janet Dailey (who called Branson home for many years) spent nearly two million dollars remodeling the Inn and reopening the place in 2011. In 2013, Dailey died and her family was left to sell the hotel, now named Ye Olde English Inn.

“I grew up around the inn,” she notes warmly. “Some friends of the family used to own the building when I was growing up, and we used to play, and eat at our friends’ restaurant.” Today, the beautifully restored Inn is open to guests, as is the Black Horse Pub. A Hollister native, Kimmel hopes to see the rich heritage of Hollister reborn.