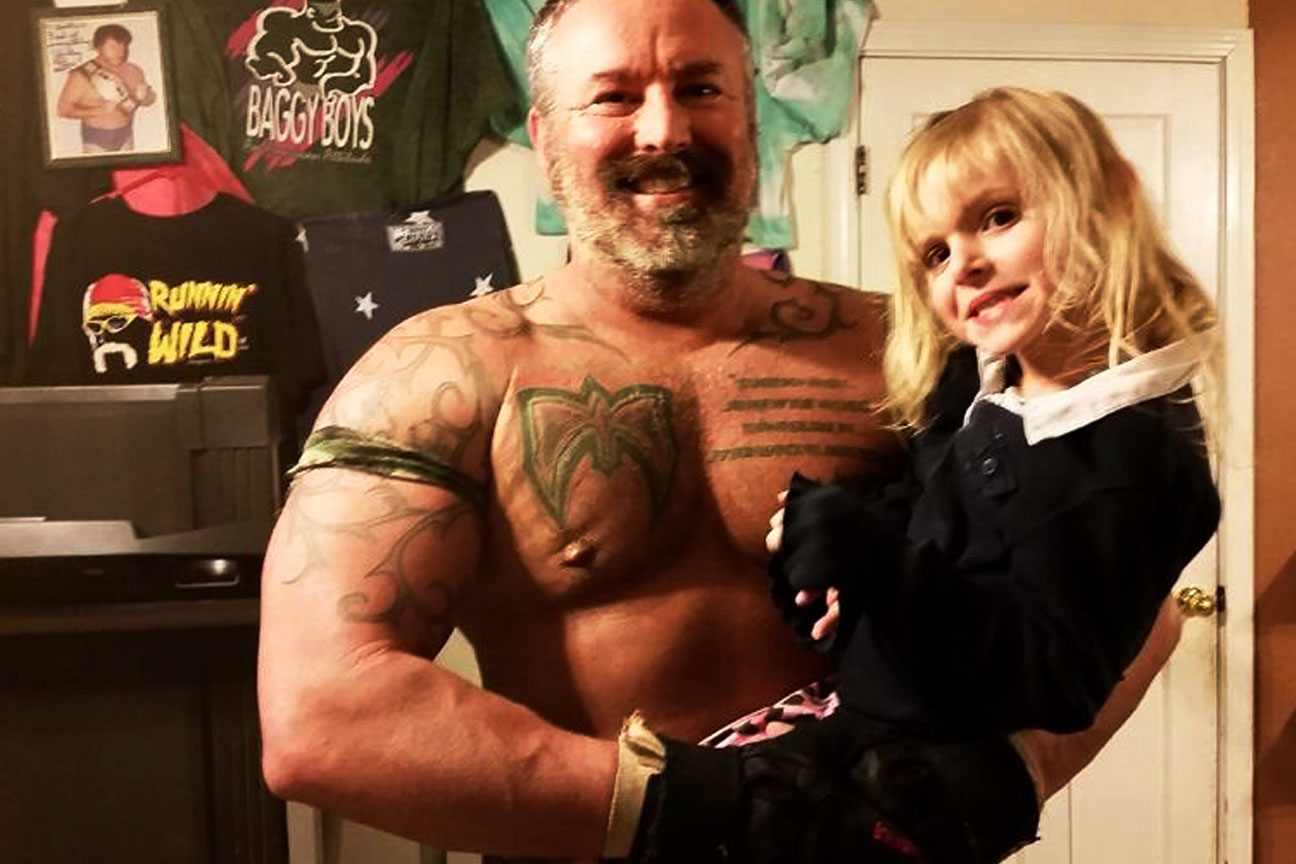 Terry Sartin remembers his diagnosis of stage four colon cancer with the clarity reserved for life-changing moments. He was 42 years old, recently training young police cadets in defense tactics. His wife and a corporal had talked him into a colonoscopy after he mentioned passing blood. “I’d chalked it up to training guys in their 20s,” he muses.

“We were about 30 seconds into the procedure and I remember seeing something on the monitor. ‘Doc, that don’t look right,’ I said.”

“Son, it’s not right,” the doctor replied. “Then they turned up the gas and knocked me out.”

When Terry came to, he faced the news of a tumor the “size of a soda can” and a grim prognosis. Surgery was scheduled immediately.

“What are they telling you?” the sheriff asked the next day.

Backtrack to 1987 and a 19-year old Terry faces his father’s death from heart trouble.

He began training in the basement of his grandmother’s house in Halltown, Missouri. “I didn’t know what I was doing so I just did everything.”

Reading workout magazines led to throwing punches and kicks on a heavy bag and biking the three-and-half miles to the I-44 truck stop and back. In time he found himself in the local gym for serious weight training. “That’s where I met my first law enforcement partner who started out as my workout partner.”

Fast-forward to 2010 as Terry met with his surgeon.

“The time frame [of six months to two-and-a-half years] is not gonna work for me,” he told the Springfield doctor. “I have a two-year old baby and my wife is pregnant. We have 10 children. I have to live long enough for my girls to remember me.” A few short days later, Terry walked into the hospital, still feeling fine.

“Don’t wake me up and tell me you think you got it. Tell me you got it all,” he said to the physician moments before surgery.

Terry woke up to good news:

“We re-sectioned your colon. You don’t have a colostomy bag. We got it all.”

The tumor had grown through the colon. The cancer had spread into the lymphatic system, necessitating the removal of 27 lymph nodes in his chest.

“There was probably 30 to 40 people in the room when I woke up, from family to law enforcement, all showing their support.

Chemotherapy was next and it would require all of Terry’s trademark strength and tenacity to survive. Fortunately, he’d been an over-achiever long before 2010. Back in the early ‘90s, he and his first workout partner attended bodyguard school — “the same training the Secret Service gets” — and a couple years later was invited to get started in law enforcement by the academy’s owner.

“Everybody had to start out entry level,” Terry notes quietly. “But within the first six months I got to go out with the swat team on my first mission, which is pretty unheard of really.” He began working for both Stone County and Christian County’s sheriffs departments. When Christian County got the Immigrations & Customs Enforcement (ICE) contract, Terry created a five-man  transportation and extradition unit.

“We’d go to places like Cassville and do raids with dozens of federal agents. One day we detained 176 people for processing to see who was illegal, who were criminals, and who were people here just trying to better their lives.”

Transportation and extradition brought more unique experiences. “My team would meet the plane on the Kansas City tarmac. It’s an unmarked plane. You’ve got a marshal under each wing. We load 90 prisoners and stay on the tarmac. We’re responsible for the prisoners until the wheels come off the ground. We did that probably once a month. It’s something not just everybody gets to see or even knows is going on.”

The job included flights to Hawaii — “a nice perk of the job” — and New York City — “quite a shock for a small town country boy” — for extraditions.

“We worked with Port Authority and transported people back from Riker’s Island. We were in the courtrooms in Queens — which are huge, like a movie theater. The buildings are so tall that you can only see two or three buildings ahead because no matter how far you look up, there’s always something blocking your view.

On September 11, 2001, Terry was back in the Ozarks, helping his brother on a farm near Rogersville. “My wife called and said, ‘The world is going crazy. They are flying planes into buildings.’ I think people all over the country were as scared as people in New York City. Everything changed.”

When chemotherapy began, everything changed for Terry as well. A chemo port was put in his chest. The “atmosphere was sad and dark and gloomy,” he remembers. “I didn’t want my kids to see me that way.”

During treatments, he refused a wheelchair, and then rolled his IV with him, chatting with other patients. He stayed tanned, bought “I Hate Cancer” shirts, cutting out the arms.

“My kids called me Superman and then called me Cancer Warrior. The name stuck. That was my persona when I was in the cancer center.”

He encouraged fellow patients on their eating, outlook and exercise. “I got a lot of people to start walking.” During treatment Terry dropped from sturdy 200 pounds down to 140 pounds. He credits his passion for fitness with his survival.

“I think exercise is cumulative. Everything I did from 1987 to 2010 made me strong enough to survive.”

Today, though still working through side effects of his treatments, Terry is hard at work increasing his strength and stamina. “The mind always fails before the body. The body is capable of amazing things if we can push through mentally.

“Always give one hundred percent,” he tells others, “but remember 100 percent can vary a lot from day to day. It doesn’t mean you have to finish a certain routine. It means just giving all you have to give at that moment.”

Don’t Be Afraid To Be You: Queen City Beard & Moustache Federation
April 17, 2018