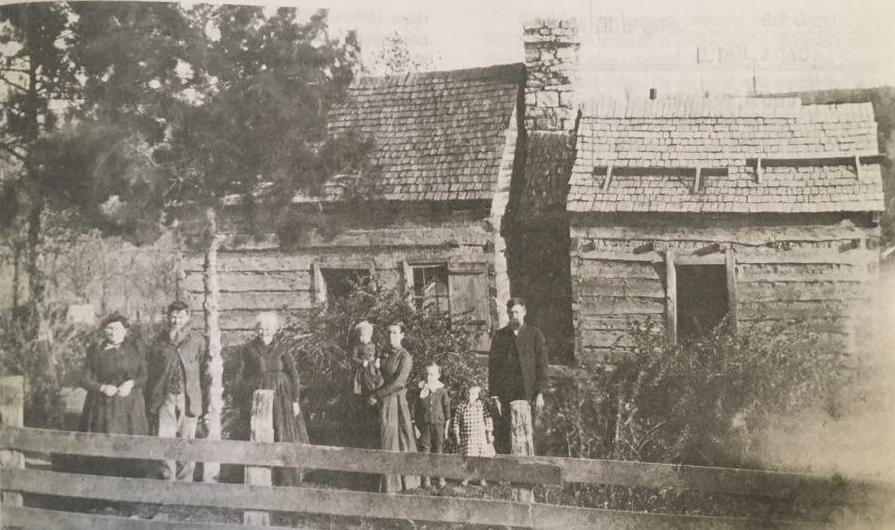 I’ve read many stories, books, documents (and heard tales from many Stone County locals) about the infamous Alf Bolin. To decipher fact from fiction is so difficult these days with there being so many tidbits that are slightly different from each other. There are also several spellings of his surname.

Yesterday I paid a visit to a friend who used to own the house in which I live.

The former owner of my house sold this house and moved south of Hootentown in 1996. In the early years of her living south of Hootentown, she ventured around her property to dig up plants and shrubs to move closer to her house and it was then she stumbled upon the old Lee Cemetery where Calvin Cloud and most of his family is buried.

The News-Leader went to her house, took pictures, and published an article about her find back in the late 1990s.

“As Lois Cameron prepared to dig up some shrubs this spring out of her overgrown field near the home she was building,” reads the newspaper article, “she uncovered a long-lost bit of dark Ozarks history.

“Under the yuccas Cameron hoped to transplant closer to her house were the Civil War-era graves of the Calvin Cloud family, who took in and raised Alf Bolin — by all accounts the meanest Ozarker who ever lived.

“He was born Alfred Bolden during the winter of 1842 near what is now the village of Ponce de Leon to an unknown father and a woman who didn’t want him. Matilda Bolden ran off with a horse trader, leaving her 11-year old son behind in a one-room cabin on the James River.

“In time, the boy wandered down the creek to the Cloud homestead. Eventually, the Clouds would give birth to 11 biological children, but they took in the boy calling himself Alf Bolin. He learned to hunt and survive in the woods.

“At 17, Bolin left home and joined a band of thieves led by Sam Hilderbrand. Eventually Bolin would lead his own gang.”

With the dates the newspaper gave in their article, I figure Bolin’s age at the time that he killed Calvin Cloud to be 20 years old. He most likely left the Cloud homestead around 1859.

Later in 1862, Bolin and two of his gang members were on the run from Union pursuers. They had a couple of horses and only one gun between them. Bolin galloped back to the Cloud cabin where he grew up. According to stories passed down by the Cloud family, Bolin and his two sidekicks rode up with hoods over their heads to mask their identity and confronted Calvin Cloud.

A master blacksmith, Cloud had joined the Union Army’s 72nd Regiment, Company B. He was called to duty in August, reporting to Springfield the same day as his son James. Calvin had served 57 days when Bolin found his way back home on October 10, 1862.

The hooded figures demanded horses and guns. As the story goes, Cloud told them he had no weapons.

Recognizing the voice of the boy he had raised, Cloud retorted: “Alf, you know you can have anything I got, but get off that horse, take off the hood and ask for it like a man.” Bolin grabbed the only gun the trio had and killed Calvin. Mary Jane,( who was pregnant with Comfort O, their daughter who was born April 17, 1863) ran screaming from the cabin. Bolin fired at her and missed. Mary didn’t know who had killed her husband since Bolin was masked. One of the Cloud boys did run to the Inmon home for help but it was too late for Calvin.

The gang left and went on to neighboring houses — that of Thomas E. Lee (who had gone to warn others of Bolin’s return) and James McGinnis (who was shot in the head by the gang). Alf and his gang left Stone County because too many people knew who he was as he had grown up there. They headed for Forsyth in Taney County.

For several more months the Bolin gang terrorized the countryside, but Alf’s time was running out. A reward on Bolin’s head was offered by the federal commander in Springfield. Varied reports say it was anywhere between $1,000 to 4,000, dead or alive.

It was winter of 1863. Robert Foster, whose home sat about three miles from Murder Rock, remained a prisoner of Union forces in Springfield. His wife offered to help catch Bolin in return for her husband’s freedom. The Union army dispatched Zachariah E. Thomas of the First Iowa Calvary in Forsyth to the Foster home. Disguised in Confederate garb, Thomas pretended to be a sick soldier on parole from Springfield on his way back home. Mrs. Foster told Bolin the soldier might have provisions he would sell cheaply. Thomas told him his story and the men sat down for dinner. Thomas didn’t want to shoot Bolin because he thought the noise would summon gang members nearby. Thomas noticed a plow colter (some folks call these plow blades or a sling blade) near the fireplace being used as a poker for the fire.

After the meal, Bolin went to the fire to get a coal for his pipe. At that moment, Thomas grabbed the colter and whacked Bolin over the head, knocking him out. Thomas and Mrs. Foster than dragged Bolin to a back room, but he began to regain consciousness. Fearing the moans would attract the gang, Thomas continued bludgeoning Bolin until he was dead. The date was February 1, 1863. Alf Bolin was 21 years old.

On Feb. 2, 1863, three Union soldiers from the 19th Iowa Infantry stationed at Forsyth journaled almost identical descriptions of the day Bolin’s body was brought in.

“Boland (Bolin) was a noted character before the breaking out of this rebellion and was a blood-thirsty villain, and the war furnished him with a pretext for carrying on his deeds of crime, rapine, and murder — he espoused the cause of the South and woe betide the Union man who was so unfortunate as to fall into his hands. With a gang as desperate as himself, he pillaged and committed every atrocity in his and several counties adjoining and scarce a dwelling but what was pillaged by him — he boasted of killing forty Union men — I boast I fear too true. Old men of decrepitude and youth of sixteen alike fared a bloody fate at his hands — his name inspired terror, and families fled at his approach. Several attempts were made to rid this country of this monster but without success….

“I went to see the murdered murderer. He was a large sinewy man and must have been of great strength and [e]ndurence – his hair was matted with blood and clotted over his face rendering him an object of disgust and horror. There were hundreds of men who gloated over him, many of whom he had grievously injured. Many of the Missouri troops who were acquainted with him came to rejoice over his end.

“Thus perished a monster — a man of blood who had no mercy for others and died a death of violence, and today hundreds gaze upon his unnatural corpse and exult that his prowess is at an end. He will be sent to Springfield as proof of his death so that the reward offered may be claimed by the proof.” — page 288, Borderland Rebellion by Elmo Ingenthron

Now, whether Bolin’s head was severed prior to the beginning of the trip or in the midst of it, I cannot tell. Either way, by the time proof of Bolin’s had arrived at Ozark, Missouri, the troops only had his head in a gunny sack. Stories say his headless body may have been buried approximately one mile north of Forsyth on the old Mail Trace road. It was the route the guards would have traveled to Ozark.

Mary Jane Cloud (Calvin Cloud’s widow) was notified to come to Ozark to identify his head. She rode horseback from the deep hills of Ponce de Leon during a heavy snow at night. She was seven months pregnant with their last child, the baby girl she named Comfort (April 17, 1863 to September 7, 1868). When Mary Jane viewed the head her response was, “That’s Alf, all right.”

There are a few different stories as to what happened with Bolin’s head once it arrived in Ozark. One is that the head was tied to a pole and paraded through the streets of town. Later it was tied to a pole in public view and children threw rocks at it. During a wind storm the pole blew down and range hogs finished the job.

Another story is that the skeleton was taken “up north.”

The town of Fosyth (from what I recently was told) used to have “Alf Bolin Days” to celebrate his death but recently they have discontinued this event.