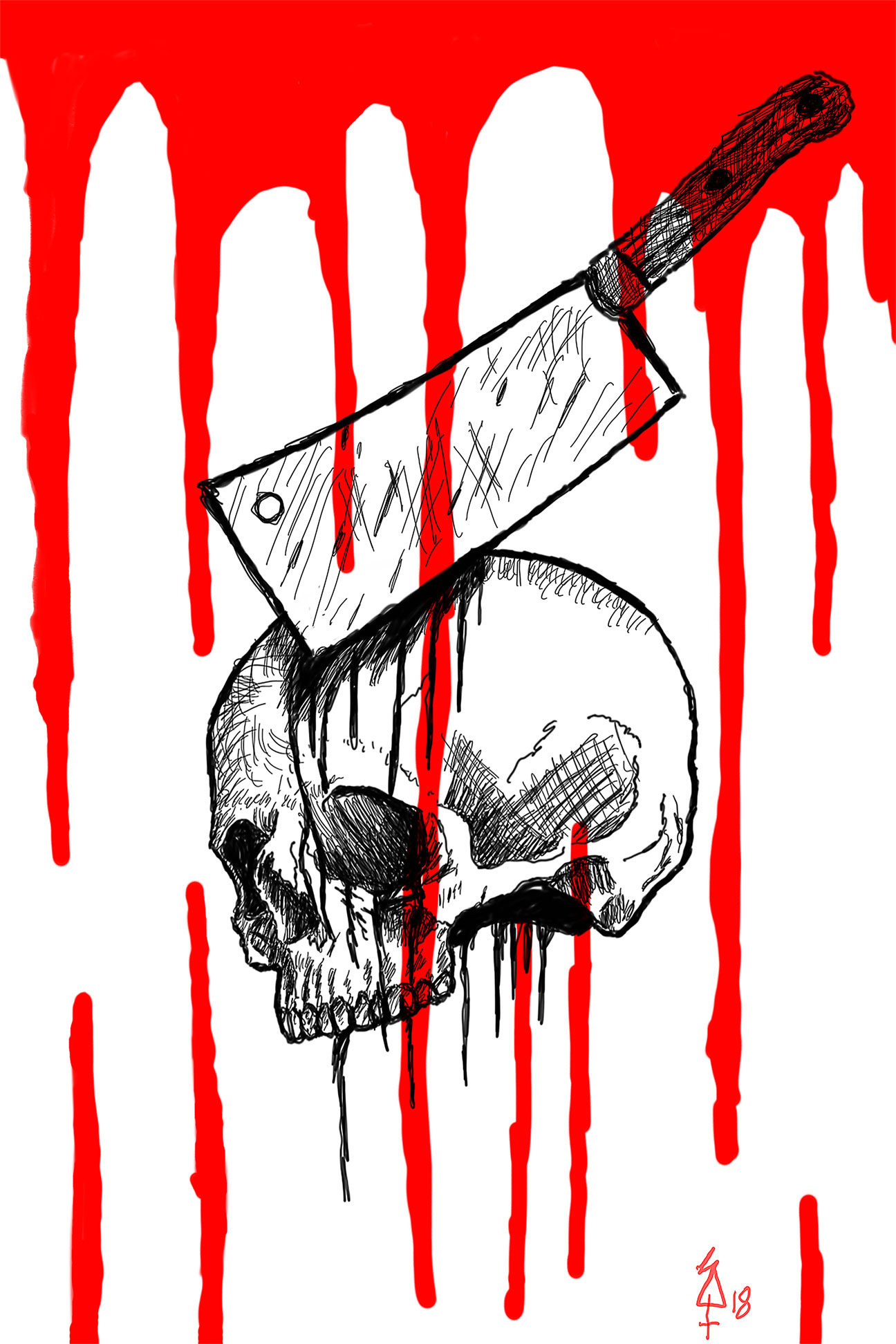 There was a flicker of afternoon sun through sighing leaves. Movement came back into the world. The ratchet-like scrape of butcher knife against sharpening stone. The rustle of old newspapers being spread out on the floor.  Dirty yellow curtains billowed in the wind. The creak of a rusty bucket handle. I flinched.

“Hurry it up, boys! Them in the basement ain’t gonna stay asleep forever, ya know,” scolded the woman.

“Ira, get yer ass down them stairs and lay out papers to catch the blood. And take that slop bucket with you.” She looked back at the knife in her hand and smiled. “This is gonna make a mess.”

I knew I had only moments. I felt myself running outside into a strange world of shadows and wind and fluttering leaves. I can’t say how, but I knew where to go. Behind the strange, square hateful building with eyes like windows that only stared, I ran. There in the dirt was my hawthorn staff, hex bag and silver pendant, all scattered among the opened saddlebags. My hands scrabbled across the gravel. Inexplicably, the world had gone solid again. The hex bag went into my pocket. I then grasped the staff and pendant simultaneously and power shot through me. I did not understand the power but felt it understood me.

I reached out and found I could touch the evil as it moved inside the building, creaking down the stairs, edging toward Micahel and myself who were both still tied to the posts.

I reached out again and could feel the old woman’s soul. Her heart beat in my ears. Time slowed. Curious, I reached out again and felt my consciousness worming its way into the thick, shaggy boy’s very being. He was tired. Tired of killing. But he didn’t mind much, as long as he got chocolate cake at the end of the day.

Again, I reached out and flinched. The dark-haired boy was like a snake poised to strike. Deadly as his mother, hungry for blood. Reaching cautiously, ready to recoil, I saw the faces of the dead he had witnessed as a small child. The slit stomachs, guts spilling out. His mother — younger then — smile on a thin face streaked with blood. The sound of the flies. Buckets of gore standing to be emptied to the hogs. The stench. The anticipation. The lust.

But wait! There was another. The father. My soul stretched out and I found him as he leaned back on an old daybed on the porch. The summer wind ruffled his hair. He stank of sweat and reached a heavy hand up to scratch an ear. There was a lost look in his eyes. Questioningly, I caressed his soul and felt despair. I saw long-ago memories lost. An innocent child playing in a field, reaching into the dirt in wonderment. A young mother bounding over the grass, eyes bright. Then, a young, thin, beguiling woman with black hair and a strange, dark glint in her eyes. The old man’s life played out to me in an instant. The memories, the decisions, the thousand-upon-a-thousand moments which had brought him, fitfully, finally, hopelessly to this living hell.

I felt tears against my cheeks.

What do I do? I asked myself. Can I strike them down? Do I have that power? Do I want that power?

“They will kill you if you do not,” whispered the leaves and shadows.

“You are a child of light,” echoed Micahel’s voice in my ears.

I reached out again to the old woman with the knife. I felt my soul gently drift over hers. Surely, expectantly, I found a snag against the smoothness of her rancid being. I pulled back against the snag and in my mind, saw her flinch. I reached in, worming my way into that inner darkness, all smooth surfaces and sharp edges, and could hear her heartbeat deep within myself, could feel her blood’s reverberation course through me.

More from writer and artist...

“I loved Writers and Artists Night. It was a very good and also humbling experience to see so many creative minds in one space, and I can’t wait to do it again.” — Seth Daughtry