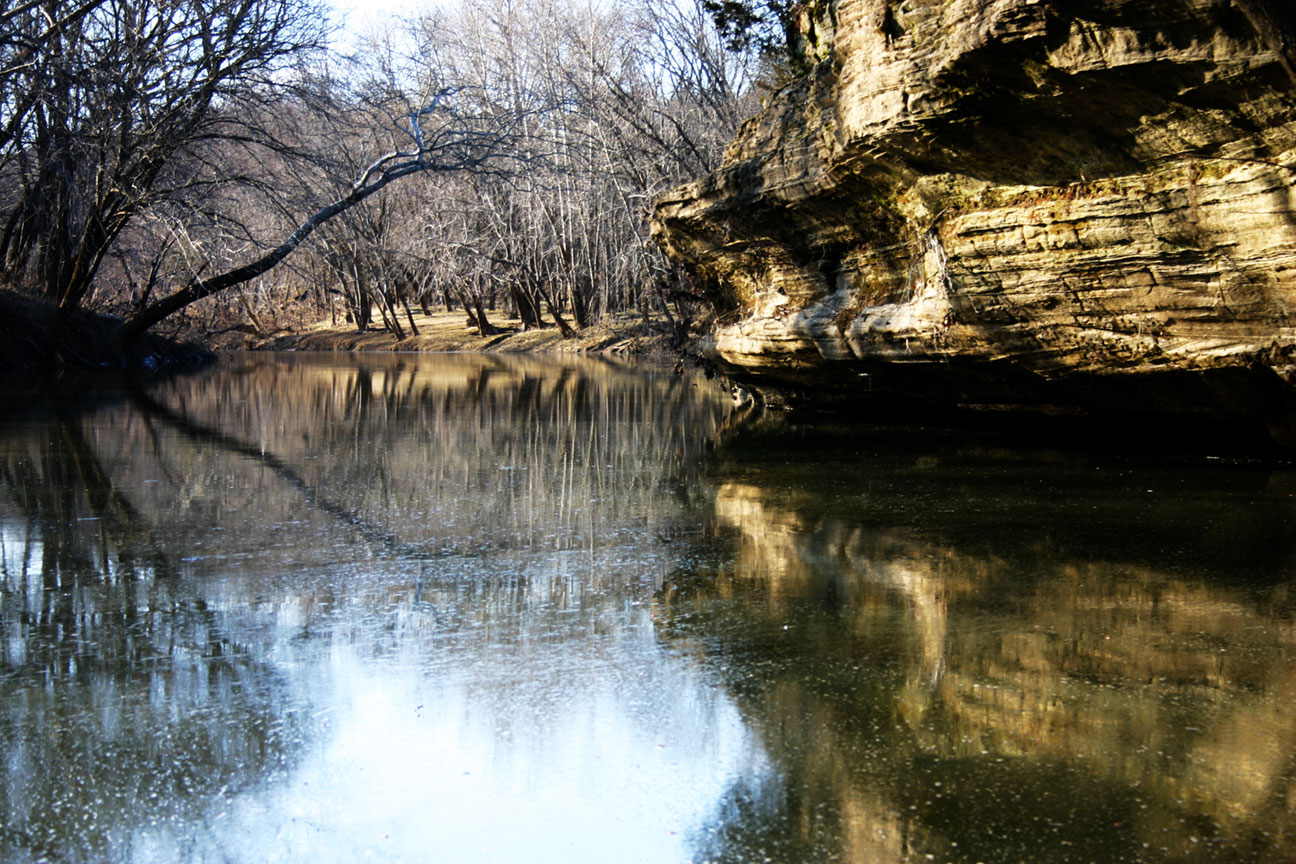 My great Aunt Pena [Peenee] Ringhiesen Stovall wasn’t my great aunt when I first met her.

She lived on the Bourbeuse River near the old Hog Trough Bridge in Gasconade County, Missouri, and was a neighbor to my Uncle Sidney and Aunt Mildred.

As a youngin’ I spent one week every summer with Uncle Sidney and Aunt Mildred. Mostly Aunt Mildred and I fished in the river — when we weren’t gardenin’ that is.

One morning we were a sittin’ at the breakfast table and Aunt Mildred announced that “Peenee” was comin over to go fishin’ with us. I was kinda anxious about the news because no one had ever gone fishin with us before and I wasn’t sure I liked the idea of sharing — with a stranger — my fishin’ time with Aunt Mildred.

But afore long, Aunt Mildred announced that our guest was a-comin’ up the road. Now, this little fellar wasn’t prepared for what I saw. I was expecting someone in a car or truck but No, Sir! I saw what looked like a man a-walkin’ down the road. I thought, Surely this isn’t the person we are goin fishin with!

But, shore ’nuff, it was Peenee. She had on men’s pants, mud boots, a checked-flannel shirt and an aviators’ cap on her head — with the flaps down! Her only resemblance to femaleness was the gingham dress worn under her shirt and over her pants.

She also had a pair of plastic rimmed glasses — you know the kind that looked like cat’s eyes — perched upon her strawberry nose. She walked like a man, long strides with a slight gimp, but strong and determined. The fishin’ poles that she was carryin’ were just a’ waving as she came down the road.

She was a sight to behold!

Pena walked right through the back gate into the yard and straight into the kitchen. She started talkin’ the moment she hit the door! I wanted to run and hide, but as soon as she saw me she commenced to talkin’ to me like she had known me all my life. Pretty soon the jitters were gone and I was ready to go anywhere with this strange-lookin’, loud-talkin’ lady. We became great fishin’ buddies.

Pena had a 14-foot wooden john-boat with locking oars kept on the river.

First thing, she taught me how to row that boat. She said iff’n I was gonna fish with her, I was gonna learn to use the boat. That way if she couldn’t go and Mildred wanted to go fishin’, Mildred and I could use the boat.

Besides, Peenee said, “It’s good fer a boy to learn how to row a boat. Gives ’em muscles and good sense.”

Even though she owned a couple rods and reels, Pena’s favorite fishin’ pole was a 12-foot hickory stick with woven thread fer line. That’s what we fished with most of the time. I still think a stick pole is the most fun way to fish in the river.

Pena wasn’t afraid of anything as long as it had legs. But, she was scared to death of snakes.

Once, when we were a fishin’ along Miller’s Bluff, an ole water snake slithered off the bluff and landed in the boat with us.You never saw such goin’s on! Afore long Pena, Aunt Mildred and myself were all in the water and the snake was captain of the boat.

Well he must not have liked being a captain with no crew because he came a slitherin’ over the side of the boat and into the water with us.
There was more yellin’ and screamin’ and carryin’ on, but the snake had had enough and swam on down the river.

But there we were, the three of us in water over our heads, and me the only one what could swim. I got the two ladies to hang onto the side of the boat while I untied it and pulled it to shallower water so we could get back in. That pretty much ended our day of fishin’.

You never spilled salt on the table without pitchin’ a pinch of it over yer shoulder to ward off bad luck. I’ve forgotten a lot of those superstitions and have never really held to any of them, but now and again I find myself thinking about such things when they happen to me. Pena finally became my Great Aunt Pena when she married my Uncle Jones.

Uncle Jones owned a service station next door to us.

One day when I went to the station there was Pena. I was glad to see her but a might confused. She was in the livin’ quarters in the back of the station and actin’ mighty peculiar, like she knew something she wasn’t a telling.

Well, Uncle Jones finally came in with a great big grin on his face — kinda like the cat that swallowed the canary — and introduced me to my new aunt. They had gone and eloped over the weekend and I was the first one of the family to know.

It was kinda exciting — my two best buddies were husband and wife and livin’ next door to me. I had spent a lot of time at the station because of Uncle Jones but now I was there more than ever! I learned a lot more about my now-Aunt Pena.

I learned she was a great cook… almost as good as Uncle Jones. She cooked a lot in bacon grease (which is still my favorite way to cook). I also learned she wasn’t the best of housekeepers but that just added to her uniqueness.

Having Aunt Pena next door was wonderful but short-lived. A year or so after they were married there was an attempted hold-up at the station.

Aunt Pena was in the stock room and walked out to find a shotgun pointed at her face. She leaped back, slamming the door and tripping. She fell backwards to the floor just as the gunman sent a blast through the door. The attacker got away and was never captured but the damage was done.

Both Pena and Uncle Jones survived the attack physically, but emotionally they had had enough.

Uncle sold the station and they moved to a farm on Jakes’ Prairie and then to another just up the road from where Pena had lived before they were married. She was back on the river, raisin’ meat (hogs and cattle), dogs and a big garden. Uncle Jones wouldn’t let her wear her pants but she was back to wearing her boots — with her dress.

Recently I made a trip back home… to the river country.

Passing by Aunt Pena’s home place, I saw her house was still standing (the original house, where she lived when I first met her).

It looks more like a shed than a house, but that was where she lived. The old asphalt siding — that symbol of fashion, style and protection from the elements — was still in good shape,

The small two-room shanty stands as a memorial to wonderful days gone by and to a simple but hard- fought way of life that some remember but most just read about. I am grateful to the new owners for letting the house stand.

As I wandered down toward the river, hundreds of memories flooded my mind’s eye. I stood for a while, smiling, laughing, and crying a little, over the privilege of having known such a wonderful lady.