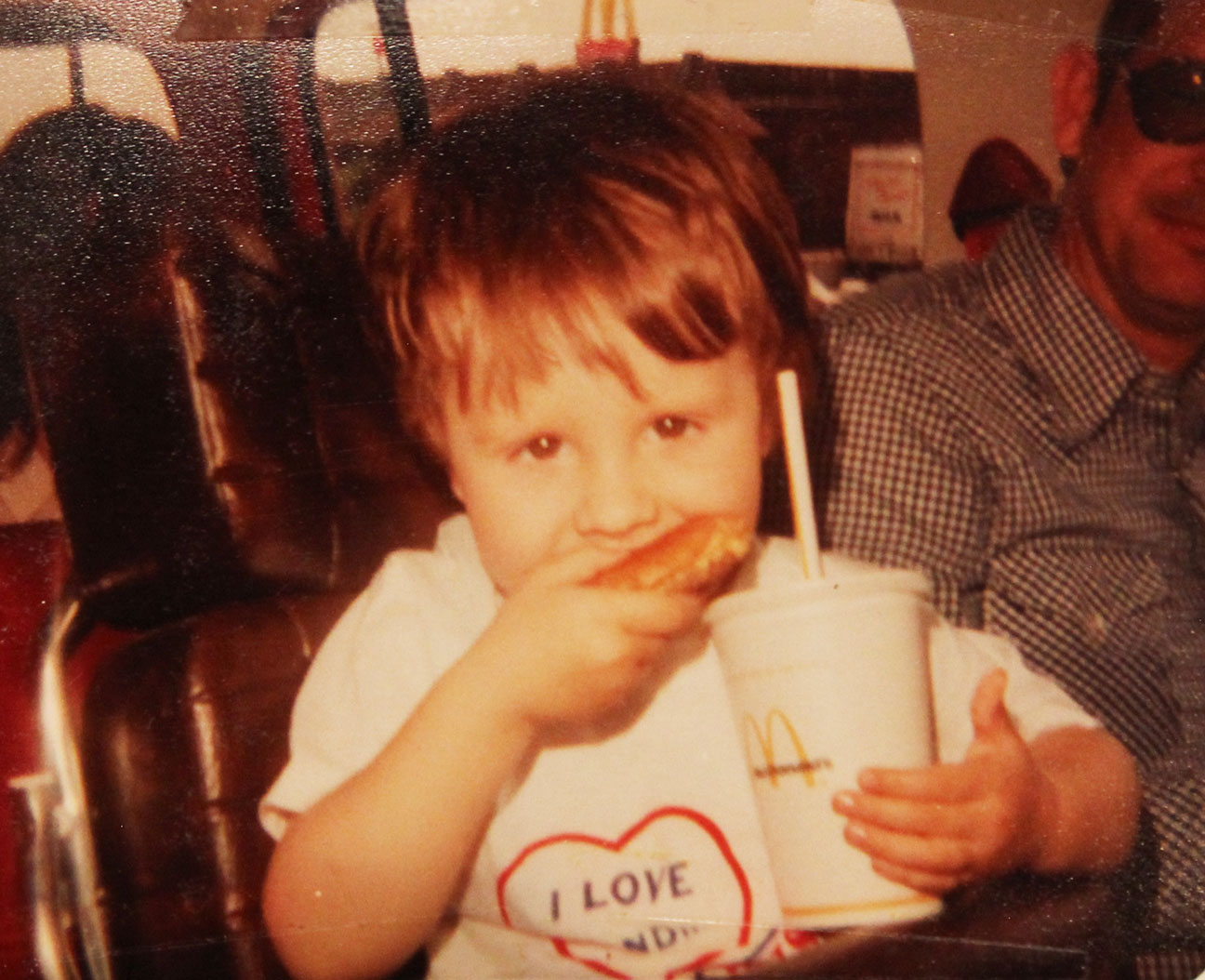 Back about 1981 when I loved cheeseburgers and didn’t wear pants. Come to think of it, little has changed since those days.

“I’m sitting across from Joshua Heston, editor of the impressive StateoftheOzarks.net. We are in the cozy Vintage Paris coffee shop in downtown Hollister, Missouri. The winter air is brisk and Joshua — he insists on my calling him Josh — is wearing a faded Bass Pro hoodie and Old Navy jeans. He smiles when I ask about the new blog “An Ozark Workout”  and finishes his favorite drink — “a traditional espresso macchiato,” he notes wryly — before answering.

Nice start, huh? I’ve always wanted to sit down for one of those self-indulgent puff pieces where the journalist takes note of what you’re wearing, what you like to drink, or what you’re listening to on iTunes (it’s Mumford & Sons, since you didn’t ask), before graciously firing off not-particularly difficult questions:

“What is it like, being world-famous and rich and handsome and wonderful and all?”

But alas, I’m not world-famous or rich so that interview never occurred. Still, I am a spectacular writer and I can at least imagine how that might go. And so, feeling very wry indeed, I wrote the paragraph above.

And that brings us to the real beginning. Yes, I am Joshua Heston. I am editor of StateoftheOzarks. Spectacular writer (I think I already mentioned that), darned good graphic designer (which I had not mentioned), and someone who loves donuts. Also potatoes. And donuts made from potatoes.

Did I mention I work long hours at a desk?

All of which resolves itself into another spectacular reality:

Now, mind you, I wasn’t always fat. And many people today might not even call me fat — trust me, it’s all in how you dress — but yes, yes, I am fat. I am also in shape, which is an interesting reality as well. Of course, pear-shaped is indeed a shape.

This journal is about raw honesty, which is usually missing from these types of published diatribes. And also about humor, which is equally missing from said published diatribes. And let me just begin (again) by saying this isn’t about selling some sort of magical product or mystical machine which will turn you — yes, you! — into a lean, shredded, fat-burning machine in only 30 days or your money back!

No, this is me sharing my journey because I hope you’ll find it inspiring. And if not inspiring, at least funny. So, let’s turn back the clock.

The first time I was aware of my body in any meaningful way was when I was about three years old and my mom gave me a compliment:

“You’ll grow up tall and all the girls will want to date you,” was the gist of it and I remember —  like Adam in the Garden — becoming suddenly aware that I was wearing no pants.

And, while having no pants might be a way to get dates when you’re tall, I wasn’t tall, and so the information was both enlightening and embarrassing. Strange how moments like that stick in your head.

Or, perhaps, just my head because you’re not necessarily troubled and neurotic.

Great genius comes with a price.

Fast-forward to age 10 or thereabouts. After years of being skinny (don’t worry, I did start wearing pants), my pre-adolescent body prepared for a yet-unforeseen growth spurt without consulting me first. And I got fat.

Not horribly fat, mind you, but certainly chubby. My belly stuck out. My cheeks were round as little apples. And I was at a loss of what to do about it! I became severely self-conscious. I insisted on wearing a shirt whenever swimming. I retreated into my favorite hobbies: building model airplanes, reading books about World War II and Disney World, and obsessively watching Ducktales.

Also, I was once forced to compete in a swing-across-the-monkey-bars game in which I, with a heavy middle and not-much-for-arms, struggled on the first rung before slipping ignominiously to the ground while everyone else watched. Several small, strong boys effortlessly swung across as though they’d been born monkeys and thus they became heroes. I resolved then and there to be smart rather than strong or fast.

Then I went back to reading the encyclopedias and eating Little Debbie Swiss rolls. And thus began my bi-polar relationship with food.

As a suddenly plump 10-year-old, my mom resolved to help me diet, limiting portions and even buying a desperately chunky “weight loss shake” I choked down after it had been blended with ice cubes. “Tastes just like a chocolate malt!” cheered the marketing starburst on the canister’s silvery label.

No. No it did not. It tasted somewhere between chalk and poop — or how I would imagine chalky poop to taste as I confirmedly (and relievedly) have no objective experience with either. Regardless, it was disgusting and ineffective.

I think my mom realized the whole diet thing wasn’t working the night I — snuggled into bed and from behind my Campaign for Guadalcanal book — politely asked for a glass of water and some crackers. Also, the salt shaker and the leftover beef roast sitting quietly in the refrigerator.

My second cousin George — in his 50s and more like an uncle — finally put the nail in the Josh-should-diet coffin when he, speaking of his son, said, “Andy did the same thing when he was a kid. Got chubby and then started growing like crazy. Don’t worry about Josh. He’ll just end up being tall and skinny.”

And I did. For awhile.

Adolescence was a harsh and jarring experience. I’d never been particularly short — for my age, mind you! — but I was, well, average. At age 13, I was still average.

At age 14-and-a-half, I was six feet tall and string bean skinny at 140 pounds! I still have the stretch marks on my back to prove it. You would have thought that instant height would take care of my self-consciousness but you’d have thought wrong. I was suddenly aware I didn’t have muscles or abs. This was worse than being chubby! Being chubby meant solving a problem through subtraction — just take something away and you’ll be fine. Or get a bigger shirt.

Now, this was a problem through addition. It was time to add some things that I hadn’t thought about before, like bulging biceps and a thick, powerful chest (just like the guys in the workout magazines).

The only problem was I had absolutely no idea how to do this kind of math.

So, for awhile, I retreated into towering stacks of National Geographics and episodes of Star Trek: The Next Generation, In The Heat of the Night and Darkwing Duck (“Suck gas, evil-doer!”)

Adolescence and burgeoning manhood is an unpleasant experience in our postmodern society. We find ourselves yearning for belonging and intuitively seeking an initiation of some sort. But like an expected but anonymous dinner guest who never arrives, we’re left with a weird kind of open-ended emptiness. We know there should be something happening, a moment in which we are gloriously welcomed into what it means to be a man, but we have no idea what that something is, and neither does anyone else. Loneliness ensues.

We want to be accepted. We want to know what the rules are. We want the initiation to be difficult, yes, but we also want to succeed magnificently and walk through a mystical gate beyond which we confidently know we are men. A kind of elemental, even pagan, bar mitzvah, if you will.

Late-20th century society offered nothing of the sort. Just a tepid set of rules about being nice (this was the ‘90s after all) along with the expectation that — if you’re smart and I was— there would be a rigorous battery of tediously boring college entry tests persistently accompanied with the expectation that I should magically know what I wanted to be “when I grew up.”

For years I hoped I could find the “owner’s manual” to achieving goals that were as inescapable as they appeared unattainable. This journal is my path. I hope you find it inspiring. And if not inspiring, then at least funny. Because it is.

Don’t Be Afraid To Be You: Queen City Beard & Moustache Federation
April 17, 2018