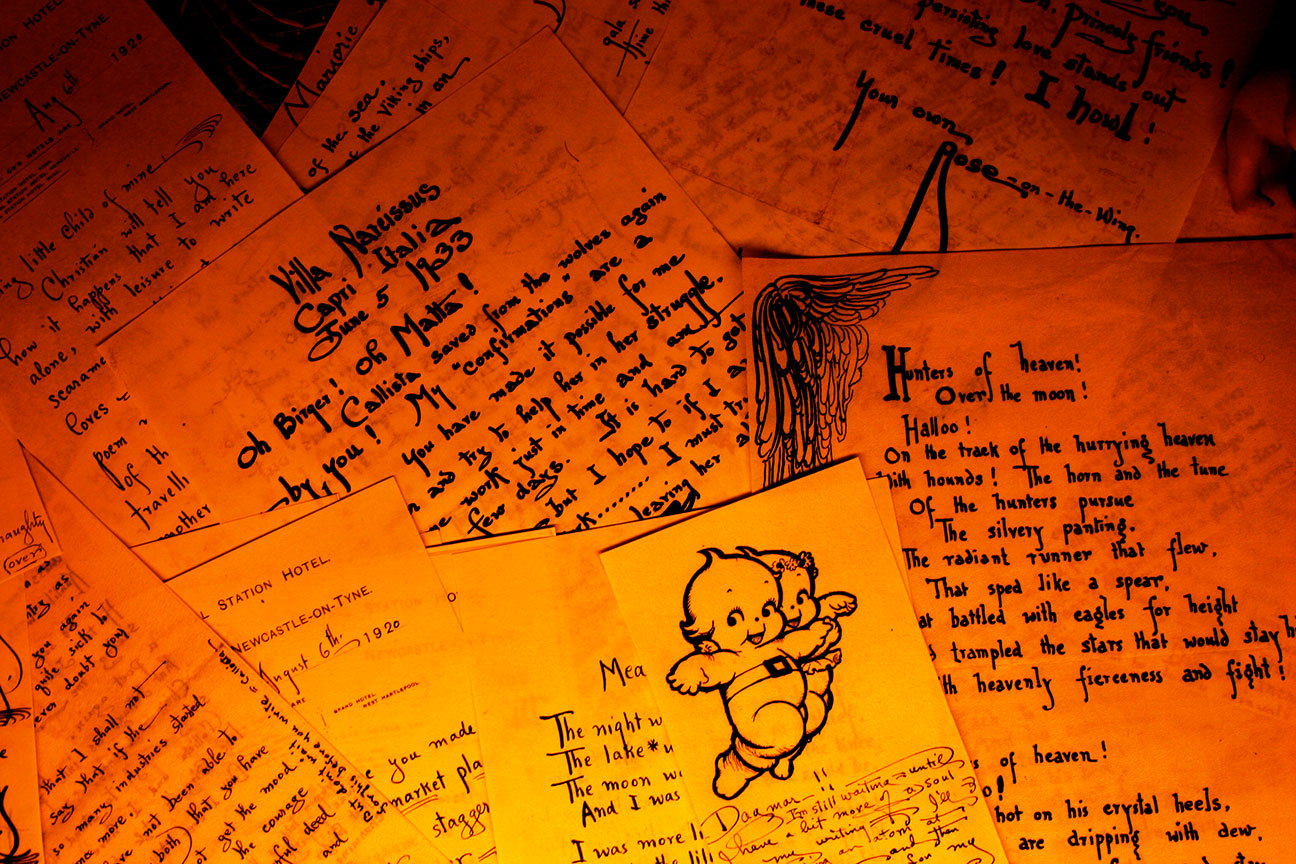 Editor’s note: I was challenged by a good friend to write a “creepy story” involving the nationally recognized Kewpie doll created in the early 20th century by Rose O’Neill, whose Bonniebrook estate lies just a few miles north of Branson near Bear Creek. For the record, I actually find Kewpies to be rather endearing but many respond differently and it was a fun short fiction to write. If you love Kewpies, are easily triggered, or don’t like horror, I don’t recommend you read this article.

The dogs barked at little Nettie when she came home last night. I don’t know why. They never barked at her before. She had taken food to the old ladies in the old house over the ridge. Nettie came back with a hand-written card that said, “With kindest thanks and with love — let this baby doll look over you as it has always done us.” The writing was in beautiful, flowing script and the card accompanied a strange little baby doll with a round belly and big eyes. Nettie loves the trinket but its eyes seem to follow me and it makes me uneasy. I don’t know why. The dogs whined most of the night but settled down toward dawn.

Nettie is back in school and I’m glad. She hasn’t been herself this summer. I hope being around other children will help. All summer, all she’s wanted to do has been to go back to the big house in the forest over the ridge and talk to the old ladies there. They are lonely and I can’t blame them for wanting company. But the place is eerie even at midday. Maddie and I went up there awhile back. It’s a three-story mansion in the middle of the cedar glades. A little wet-weather creek runs down by one side of the house.

The old ladies who live there are harmless enough but a bit odd. The house is falling apart. Roof leaks in a dozen places and the whole place is overgrown with wisteria and crape myrtle. Inside it’s dark and smells very old. There are dolls — lots of those dolls — on all the bookshelves and tables. Nettie came home with two more of the dolls. She says they are “a happy family now” and keeps them on her window sill when they aren’t tucked into a bed of rags she made for them. When I came in late one night from coon hunting, in the light of the moon, I swore I saw them looking at me from the window. It gave me a start. But when I looked again they were gone. When I went inside, Nettie was asleep and the dolls were tucked into their rag bed. I don’t know what I saw.

Christmas should have been happy but it wasn’t. Maddie’s ma and pa walked over from Bull Creek and we had a good meal. I cut down a cedar tree and we decorated it with homemade garland. Nettie won’t go anywhere or do anything without her dolls. She didn’t care about the new baby doll I bought her from the dime store. When I asked her why, she smiled so wide and said “My kewpies don’t like her. Why don’t you give her to someone else, papa?” Over the ridge at the old house, we heard the oldest of the ladies had died before New Years. I should have gone to the funeral but didn’t. The neighbors said it wasn’t a Christian funeral and they buried her in a family cemetery they’d made just down from the house. Strange indeed.

Maddie is getting pretty upset with Little Nettie. She is the perfect child. She does her chores on time. She goes to school on time and studies properly. But she won’t play with other children. Only her kewpie dolls. And she doesn’t cry or pout and act like a normal eight year old. But I can’t punish her for being happy. I feel strange, like she is taunting me with her smile. Her eyes seem wider than usual and she won’t stop smiling. Only when she is asleep does she seem like my daughter. I jokingly threatened to take her kewpie dolls away from her and she didn’t even blink. She just smiled wider and said, in a sing-song voice, “Oh, you wouldn’t want to do that papa.” For some reason, I shivered.

It’s springtime and the other old lady is dead. They buried her in the family cemetery too, but I didn’t go. It didn’t seem right. No Christian burial and not in consecrated ground, either. Little Nettie seems less like herself and the cabin seems darker at night than before. I don’t know why. Last night I dreamed I heard little footsteps pattering through the house and what sounded like silver bell-like laughter. When I put my boots on this morning, I found one of her kewpie dolls down in the left boot. Nettie must have left it there. Maddie and I have talked it over. The dolls aren’t good for our daughter. We are going to take them away from her and hope she gets better.

My wife Maddie is dead. She and Nettie went up the spring branch to wash clothes and didn’t come back. About five o’clock it was like all the world went silent and gray. I didn’t know why, but I ran up the brook to find them. Nettie was sitting on a big flat rock, smiling, holding her dolls, staring into space. Nettie’s dress and the dolls in her hands were covered in blood. My Maddie’s blood. Nettie must be in shock. Maddie was lying in the spring branch and her wrists and throat were cut. There was a paring knife in her hand. I carried my wife’s body to the wagon and drove her to town, to the courthouse. They are saying she killed herself. I think they blame me. Nettie won’t cry. And she won’t let me take the dolls, not even to wash away the blood.

Nettie was gone when I woke up this morning and I can’t find her anywhere. When I came back into the cabin after trying to find my daughter, I couldn’t believe my eyes. Her three dolls were standing on the floor in the middle of the room. If they had been there when I went out, I would have tripped over them. I tried to wash the blood from them them but it won’t come off. When I close my eyes, I swear I hear them laughing.

I dreamed of the old mansion last night. In my dream, I was walking toward the house and there were lights in every window. The smell of lilacs was in the air and the moon was full. I couldn’t see into the shadows along the path but I could hear little footsteps everywhere and also tiny, child-like voices whispering in the dark. I stood on the porch a long time before I had the courage to go in.

Inside, it was like an other world. The place was blazing with lights and there were shadows like ghosts moving everywhere. Weirdly, all the dolls I remembered on tables and shelves were gone. There was laughter upstairs — a child laughing — and it took all my strength to climb the wide, curved staircase in the middle of the house.

The second floor was dark and shrouded in moon shadows but a lamplit flame glowed from the third floor. I went up one step at a time, driven, almost against my will, as I stared at that weird light. The wallpaper was of little boats and roses and happy children. I remember that.

The light gleamed through a partly open door. As quietly as I could, I pushed the door open.

Inside, on a wide, red, oval rug, lay a beautiful woman. Her features were delicate. She was wearing an old-fashioned green velvet gown and a partly smoked cigar was in her long, beautiful fingers. Her dress was torn, exposing her body, and there was blood on her throat and breast. Surrounding her was hundreds of those dolls and clutched to her heart was an ancient book.

The door creaked and the dolls turned as one. There was blood on their little faces and hands and their eyes and mouths were black. The room went gray. I was frozen in place. The dolls stepped toward me. Their open mouths grew larger and larger. The room was shrinking.

The floor opened beneath me and I was falling into darkness. My arm hit my headboard. Heart beating fast, I was alone in my cabin. There was bell-like laughter fading into the night. I swear I heard strange skittering sounds in the next room.

But, God help me, I know what I have to do. I am taking those dolls back to the old house beneath the darkness of the waning crescent moon. I will find that cursed book. And if I have to, I’ll burn that damned place to the ground.