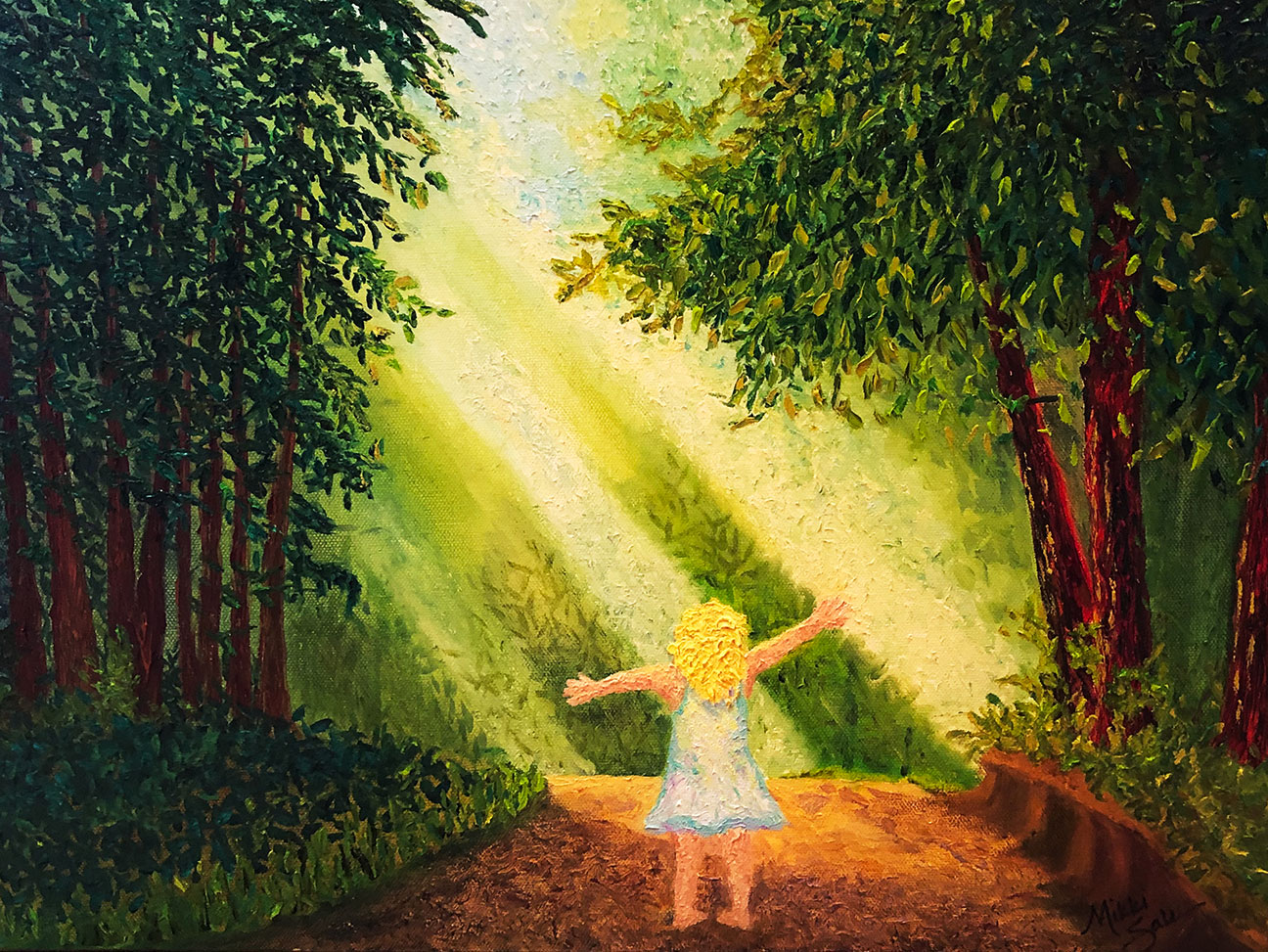 by Candice Gage with art by Mikki Sale

“Why’d you want to move to them hills?”

Grammy’s dark brown eyes crinkled with quiet laughter. My great-grandmother’s present was fading, but I was old enough at twenty-six for her to know — though not as well as she still knew the Ozark hills of her past.

It was my first trip back to California since moving to southern Missouri as a teen. Grammy had settled there in Sutter County, where my Memaw still lives, where my mother grew up and where I was born. But more than the palm trees and ponderosas, my earliest memories are populated with the living women of my matrilineal ancestry. Christmas Eve at Grammy’s. Easter at Memaw’s. Everyone at our house for my birthday. We were always together, and I knew we belonged to each other. Very early, I understood that we all came from Grammy.

And Grammy came from the Ozarks. This I have known as long as I can remember knowing anything. When I was three, I flew with my mother, Memaw, and Grammy to visit family still in the hills. Mom and Grammy hated planes, so they sat in the middle aisle while I sat with Memaw by a window. I hugged my doll in its pink crocheted blanket, and I watched mountains, plains, and rivers drift by below. I didn’t yet understand U.S. geography, but I knew we going to where we came from.

In 1921, Grammy was born Lavola Mills of Cleveland in Conway County, Arkansas, the eleventh of twelve children who called her Sniffy. While she knew depression poverty, she grew up rich in stories so long told to me they seem to be memories of my own, snapshots of a toe-headed girl running barefoot through what is now Ozark National Forest.

Grammy, her brothers lowering her down a hand-dug well by rope to retrieve a baby goat. Grammy, getting her feet traced for shoes by her daddy before his yearly trip to town. Grammy, who went to church with her mother and sisters every Sunday while her brothers ran wild. Grammy, who never drank, but whose daddy made his living selling bootleg moonshine. Grammy, who grew up beautiful like a 1940s movie star with her almost black hair done in curls. Grammy, who like her sisters had to run away to get married because their daddy didn’t tolerate suitors.

And even the California Grammy was the stuff of hillbilly legend. She climbed the Sutter Buttes with her husband on their honeymoon. Despite her four-foot-eleven frame, Grammy could handle a rifle, routinely outshooting all the men at local marksmanship contests. She hunted with her husband, and they could whistle messages across the trees to each other. She was modest and reserved in demeanor, though she could let fly an “oh shit” when the rare occasion warranted it.

But despite her rugged abilities, Grammy was traditionally feminine. She kept a clean house, making my mother wash her feet before getting into bed at night when she visited. She canned tomatoes, peaches, and cherries. She made fried okra and fried pies, and she never ran out of sweet iced “tay.” She was a devoted Christian, though she once lied to protect her husband from the game warden.

And it was Grammy who taught my Memaw, who taught my mother, who taught me to value family. When my great-grandparents ran away together, they carpooled with Aunt Joyce and Uncle Marshall in a Ford Model A. They lived and worked alongside relatives already in California, building Shasta Dam with the CCC, working in the San Francisco shipyards, picking fruit and cotton in the fields. Grammy may have moved out of the hills, but she remained a part of her family.

That last time I saw Grammy, those seventy years in California had barely softened her Arkansas accent. The family came to Memaw’s house, and we all ate chocolate gravy on biscuits for breakfast. I asked Grammy to tell her stories again, and she did. She spoke about her brothers teaching her to shoot, and she talked about them taking her out dancing — a story Memaw had a hard time believing. But age made Grammy forget her reserve, and we caught glimpses of her secrets, sides of her we never knew.

Grammy died a year later. It’s been eight years since that conversation, and I still remember both her question and my answer. I smiled when I told her why them hills are home.