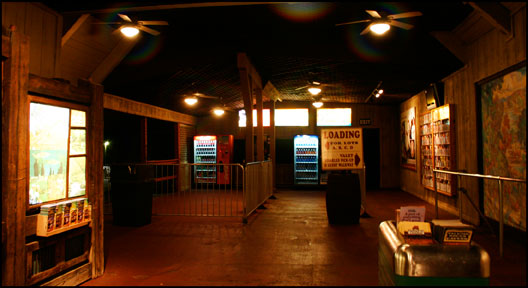 On the west wall of the unpretentious visitors’ exit of Silver Dollar City, a beautiful Kieffer mural celebrating the Ozarks in autumn can be found. Equally unpretentious in style, this work of George Kieffer is passed by tens of thousands of guests, often without a second thought.

Much like the Ozarks themselves, the mural is a piece that simply is. It does not ask to be noticed, appreciated, studied. But a closer inspection reveals great depth, emotion and journey.

The exit through the Ozark Marketplace is a warm place, framed by vintage green turnstiles. A corner of the Kieffer mural may noted at far left of the photo.

Framed by dark forest, a ramshackle turn-of-the-century Ozarks farm is showcased. Blue hills beckon and, interestingly, a very modern Table Rock Lake reminiscent of the James River Arm may be seen. Winding country roads punctuate Kieffer’s works, drawing the eye farther into the mural. The run-down barn is depicted with a loving touch while three vintage figures (two men and one woman) work a small patch of wheat.

Bringing in the sheaves, what appears to be father, mother and son work the fields in a dry Ozarks Autumn. Wagon wheels have rutted the old country road, framed by greens, rusts and golds.

A stand-alone piece in the mural, a red grist mill sits near a rocky stream, framed by vibrant autumn foliage. Note Kieffer’s use of an nostalgic teal green for contrasting leaves, upper right.

A lone hunter in red flannel and suspenders stands in a clearing, buck before him. Kieffer injects great warmth and a dramatic sense of comfort. The teal green re-appears to break up the reds, a red wagon is nestled next to another barn, roof worn and lightly green with moss.

Red oak leaves frame a pioneer family before their humble cabin.Many years pass in a single painting, from the earliest days of white settlers to turn-of-the-century farms to the completion of Table Rock Lake (1959) — a ubiquitous presence throughout the entire mural, framing the upper third of the mural. The lake creates a subtle reminder of modern times.

A subdued treatment combined with soft colors create a haunting quality to the distant hills and lake. The mural consistently gives voice tothe rugged White River Hill Country before traffic, paved roads and electricity. It is an idealistic view, yet pervasive in its contrasts. Dark forests call from the edges of the painting, seemingly warning of the unknown just beyond sight.

Warmth and comfort, hard work, great beauty, light and darkness, competing through the years. Classic Kieffer, classic Ozark Mountains. There is timelessness in the work.