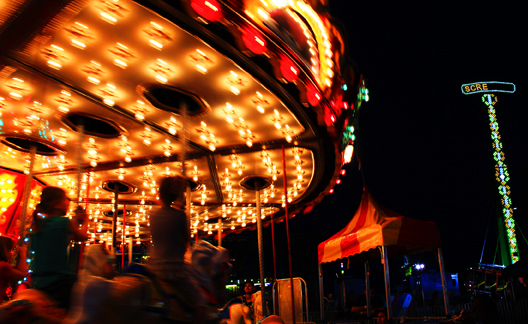 Goin’ to the County Fair 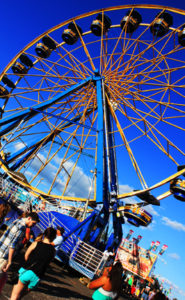 Ferris Wheels create an iconic image in summertime fairs across the nation.

Growin up in rural Crawford County Missouri, one of things we youngin’s looked forward to was fair time.

Fair time meant the city kinfolk would come a’visitin’ and we’d all be havin lots and lots of fun.

It began as we listened for the first big trucks to come rumblin’ down the highway toward town, haulin’ the rides for the midway. My sisters and I probably looked like urchins to the drivers of those big trucks as they drove by our farm. We stood as close to the grader ditch as we could just a’wavin and a’hootin’. We’d try to identify the different rides that would be at the fair and wondered if we’d be big enough or brave enough to ride them.

After the trucks had all passed the waiting game began. We made sure our chores were all done in good fashion. We tried not to fuss and fight with one another. It was almost like it was Christmas. My sisters and I didn’t want anything to happen that might get us grounded. 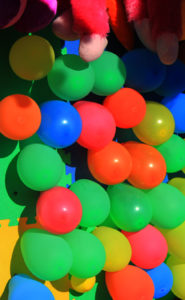 The county fair always kicked off with a big parade. Marching bands, floats from different organizations in town and around the county, clowns, cars, horses and lots of candy and balloons! I loved the parade!! I still get a mite choked up when I hear the cadence of a drum corp and watch Old Glory leadin’ the way down the street.

As I sit here a’writin’, there is an avalanche of memories a’floodin’ my mind. The sights, the sounds, the smells, are like old friends who have come a’callin’. 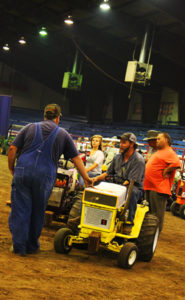 Tractor pulls of all sizes bring a sense of comradery and a reminder of the fair’s rural roots.

I still hear the sound of the engines that operated the midway rides. The squeals and screams of those who were a’ridin’ the rides, the kiddie cars, planes that actually went up and down, the shore-nuf merry-go-round are still a’ringin’ in my ears. And the bigger rides like the Scrambler, the Octopus, the Tilt-O-Whirl and the ever popular Ferris Wheel.

When I got to the age of sparkin’ the gals, I liked the Ferris Wheel best because of the chance I might get to hold a gal’s hand or steal a kiss from her while stuck at the top of the ride. Ya’ll know what I’m a’talkin’ about.

I can hear the carnies hawking their games of chance, enticing the dads and young bucks to spend hard earned money to get their kids or gal a teddy bear. There were games for all ages. As a kid I loved the Duck Pond cause every duck had a prize attached to it. My favorite prize from the duck pond was a Chinese finger trap (I liked to never got my fingers free of that cussed thing). 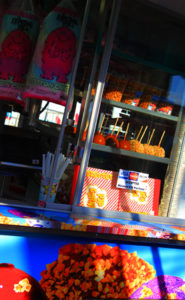 There were games that challenged one’s skill (like throwin’ darts at balloons, throwin’ base balls at lead milk bottles, throwin’ basketballs or footballs through hoops or holes and tossin’ coins, usually dimes, into plates or goblets). I was pretty good at tossin’ dimes into goblets. Even won a bunch of gold-colored goblets one year. We used those goblets as fancy drinkin’ glasses for a long time. 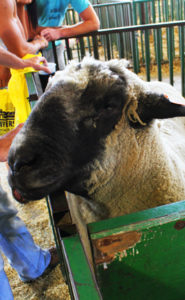 Prize-winning critters of all kinds, shapes and sizes present a friendly face to the long lines of fair-goers.

I never was much good at the other games although one summer I did win my gal friend a teddy bear. ’Course after all the money I spent tryin’ to win her that bear I could have bought a dozen of ’em for her. I kinda remember my dad just shakin’ his head when I told him what that teddy bear had cost me.

The fairgrounds always smelled of pop corn and cotton candy and of hamburgers and fish fryin’ at the food stand. I dare say the best tastin’ fish sandwich I have ever eaten was at the Crawford County Fair’s food stand. The sandwich was nothin’ more than a deep fried fish fillet between two pieces of white bread. Put a generous amount of ketchup on it and oh my what a meal. Makin me hungry just a thinkin bout it.

Another fond olfactory — How’s that fer a big word? Bet you thought ol’ Elias wouldn’t know that one — memory is the beer garden. 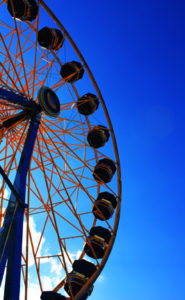 Blue skies and high rides. It is summertime in the Ozarks!

The thing I miss most about the county fair is the sense of community. For most country folks the county fair was like a big family reunion ’cept the family included yer friends and neighbors. And the sense of community extended to the “showin off” stage as well. From the stock barns to the exhibit hall, folks would bring everything from hogs to flowers to show off their “stuff” and be judged by their peers and receive their white, red or blue ribbons. 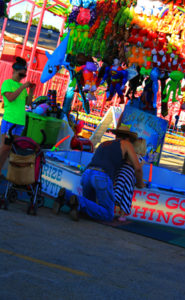 Even the smallest visitors can find something upon which to try their luck.

The stock barns were always full of prize critters from beginning to end of the fair. Dairy cattle, 4-H show steers, hogs, sheep, and goats. I still like to roam through the show barns and see some of the best live stock an area has to offer. I was real disappointed a short while back when I attended a local regional fair and found the stock barns completely empty of any critters. Seemed to me like my goin’ to the fair experience just wasn’t complete without seein’ the livestock. 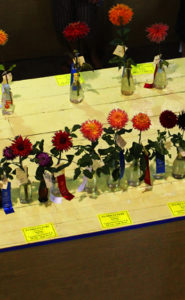 The 4-H and Extension Club exhibit hall was always full of things to oooh and awe at. There were tables full of prize winnin fresh garden vegetables, home canned produce, jams and jellies. There were also displays showcasing the different 4-H clubs and Scout troups handiwork. There was even a room dedicated exclusively to flowers. One of the purdiest and funniest sights I remember ever seeing was tables full of glass sodie bottles with a zinnia stickin’ out the top of each one. 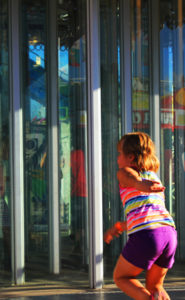 A young girl runs for the fun house. The memories begin anew.

This little stroll down memory lane sure has put me in the mood to hunt me up a bag of popcorn, some sort of breaded deep-fried-critter meat-on-a-stick and a caramel apple with nuts! It has also hung a hankerin’ on me for slower, quieter times when the order of the day was just to have fun with friends and family. Course, ya don’t need a county fair to do that, but a county fair sure doesn’t hurt!