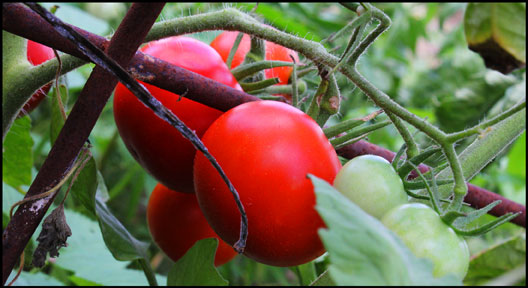 The red, bright fruit of the Reisentraube — small compared to the mighty Mortgage Lifter or Millionaire varieties — clustered almost like grapes (the name means “Giant Bunch of Grapes” in German) can be plentiful even in dry, hot weather. 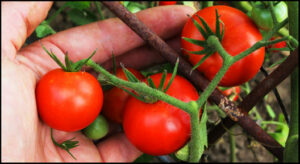 Reisentraube tomatoes are an indeterminate variety, meaning the sprawling plants produce throughout the growing season. This is an old German heirloom variety, made popular by the sweetness of the fruit and the hardiness that is to be expected of heirloom fruits and vegetables. 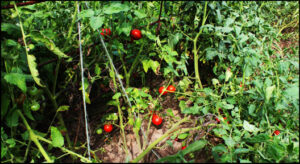 According to RareSeeds.com, Reisentraube was first sold in Philadelphia sometime around 1850. Despite the fruits’ relatively small size, this is anything but a cherry tomato. The taste is hearty and the flesh meaty with comparatively few seeds.

Maturity of Reisentraube is generally 69 to 85 days. Our plants were set out in May with fruit appearing by August 12. The vines made considerable use of the hog panels set through each row. Blooms were plentiful, though here in the Ozarks, the summer of 2011 was marked by intense heat (112° F as a high for nearly a week) and nearly a month without rain. Nighttime temperatures would hover around 89°F. 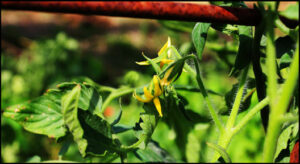 Between the hot nights, scorching afternoons and extremely dry soil, most everything in the garden either wilted or dramatically slowed production. When rain finally came, many of the tomatoes split from the sudden surge of water.

Through all this, the Reisentraube managed quite well, consistently outperforming the commercial hybrids and managed to resist splitting fairly well.

All tomatoes are members of the Solonaceae family (as are potatoes, peppers, eggplant, nightshade, tomatillos, ground cherries and tobacco). Some tomato varieties — mostly heirlooms — have “potato” type leaves, though the Reisentraube’s serrated edged foliage is classified as regular. 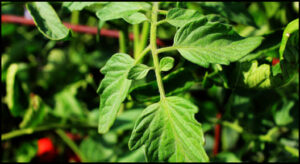 The final verdict? Reisentraube tomatoes are hardy, prolific and an important part of our garden heritage. The sprawling indeterminate are not appropriate for patio or container gardens but an excellent option for anyone with a decent amount of space (and maybe a hog panel or two for support). The variety is good for fresh eating, salads and canning as well.

Reisentraube Tomatoes: State of the Ozarks