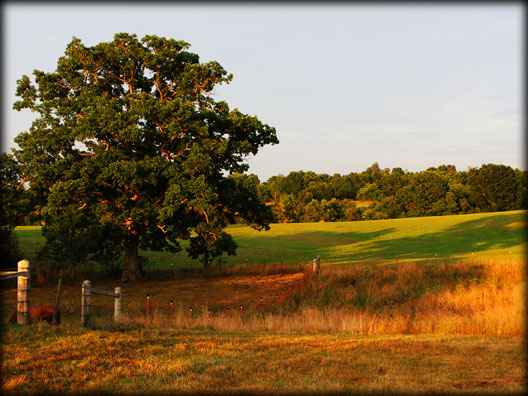 It was late afternoon one day last summer. The hot drafts off the ridges played over the Bilyeu Ranch, pushing down toward the Finley River. We were in the garden, checking on beans and tomatoes and what-not when Miss Shirley Bilyeu poked her head out the back door.

“Brother Dale, you gonna be there a minute?”

Afore long, midst the cucumber and tomato vines, Miss Shirley walked holding a plate of the most delectable-looking pile of fresh fried okra you ever saw. And I do believe it tasted better than anything else I had ever eaten my entire life. Right there in the garden, me and Josh wrestled over that plate and ate it like it was good.

You see, Miss Shirley fries her okra in a pancake-type batter that is nothing short of a culinary miracle. She shared the recipe with me but when I tried making it, it just wouldn’t happen.

Okra is a versatile vegetable. The young flower pods can be fried, stewed, pickled, boiled or just eaten raw. Amazing in Cajun cuisine, it’s pretty larrapin’ rolling around in corn meal and hot grease. I hear tell it was brought to this country from Africa ages ago, not as a foodstuff but for its floral beauty.

My first experience eating okra was in the Boston Mountains. My soon-to-be mother-in-law, Jessie Elam, originally from Louisiana, was well-versed in the culinary uses of okra. Her favorite way of fixing the African vegetable? Boiled amongst a pot of cowpeas they were mighty slimy. But there was a taste there of which I could not get enough. Whether it was the cowpeas, the okra, or the combination thereof, I fell in love right there with okra.

Growing okra takes full sun, a rich soil, and you better harvest those pods at least every other day. In sultry weather, the flower pods mature fast, getting spiny, hard and downright inedible. So pick them quick when the pods are only two or three inches long.

You can cut okra into half-inch slices, roll them in cornmeal and flour, and throw them into a skillet of hot grease. Or you can do it restaurant style — battered and dropped into a deep fat fryer.

My favorite way to eat okra these days is in gumbo. And throughout much of the American South, when you say Gumbo, folks just figure you’re talking about okra ’cause gumbo isn’t gumbo without okra. Slice up the pods and throw them into your gumbo pot 20 to 30 minutes before everything else is done (cook ’em much longer and they may just reduce down to nothin’).

Or you can do like my buddy Josh and just eat ’em raw off the stalk.

Okra: State of the Ozarks