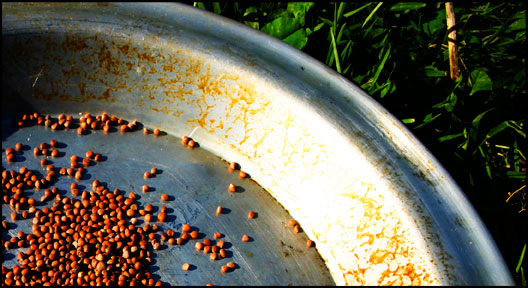 by Joshua Heston and Dale Grubaugh.

Here in the hills, radishes are planted in early spring, the seeds sown in large quantities along a single row. Plant radishes in the dark of the moon (as the moon is waning) to encourage root growth. And do not plant them in heavily fertilized soil — you will just end up with radish greens and spindly roots.

The White Hailstone variety (all photo plates) is an exceptional variety. It is an early, old-time white spring radish. Grown in the StateoftheOzarks heirloom garden near Sparta, Missouri (on the farm of Don and Shirley Bilyeu) the White Hailstone produced heavily.

We planted them on April 14 and harvested a heavy crop on May 23. We could have pulled the radishes up to a week prior had heavy rains not turned the garden into a mud pool. Even with the delayed harvest, the White Hailstone was of exceptional flavor and had not turned pithy, as is typical of some varieties.

Our row was divided in two. Half of the seeds had been planted individually. The second half was closely (and heavily) broadcast. The heavy broadcasting of seed into the row was ideal. Growing White Hailstone in close proximity yielded an excellent crop — their closeness prevented individual roots from becoming too large.

The individually planted radishes grew much larger, reaching the size of small turnips.

Their flavor proved mild and excellent. Most of the crop was made into a slaw with many folks remarking at their surprise that radishes could be so good (or so easily digested).

Radishes: State of the Ozarks