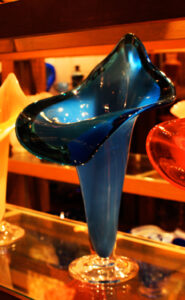 As an art form, there is little wonder glass blowing possesses the capacity to amaze.

And little wonder it has, in times past, inspired the idea of mystical qualities, as indicated in the verses below…

Overheard On a Saltmarsh

Nymph, nymph, what are your beads?

Nymph: Green glass, goblin. Why do you state at them?

Goblin: Give them me. 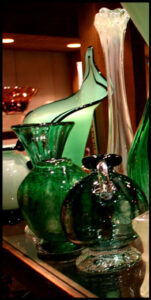 Then I will howl all night in the reeds. Lie in the mud and howl for them.

Goblin, why do you love them so?

They are better than stars or water, Better than voices of wind that sing, Better than any man’s fair daughter, Your green glass beads on a silver ring.

Hush, I stole them out of the moon.

Give me your beads. I desire them.

I will howl in a deep lagoon. For your green glass beads, I love them so. Give them me, give them me.

“In a major bit of understatement, Mary Herschend once explained that ‘I was interested in the crafts of the Ozark people. I thought others would be interested, too — and they were.’ 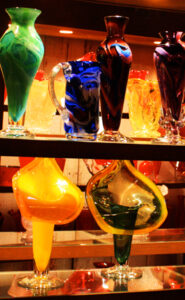 “The single most important annual event presented by the City today, the National Festival of Craftsmen, began in 1963 as the Missouri Festival of Ozark Craftsmen….

“The demonstrations of glass blower O.C. Hammond, from Ft. Smith, Arkansas, attracted wondering crowds, so the Herschends sent Rex Matzenbacher, who had come to the City for a part time job during the winter of 1963, to Arkansas to apprentice with him.

“The glass blowing factory, the sixth full time craft shop, opened in 1965 with Rex in charge of three ovens.”