Not a government sponsored travel site nor a local advertisement page, StateoftheOzarks is privately owned and dedicated to the history, culture and the people of the Ozarks.

The Ozarks region has long been a respected place where the American Heartland still has a voice. Where time runs a little slower, the folks are friendlier, and rivers a bit cleaner. A place that stands in book end answer to elite Eastern sensibilities and the flash of LA culture.

The Ozarks are still here. And we’re still proud of that.

Stories of culture, craftsmanship, history, people of the hills, and so much more… CLICK HERE FOR MORE

Articles on our Ozarks natural heritage, from trees and flowers to fishing and hunting… CLICK HERE FOR MORE

Plate 1. Ozark knives against rabbit skins and oak leaves. State of the Ozarks Photo Archive. Knife Making by Joshua Heston Plate 2. Jehu Knife Detail, May 30, 2014. Like fire and ice, the beauty of a hand-crafted knife captivates the imagination. An age-old art, knife making hearkens of generations past. Knives are essential tools,… 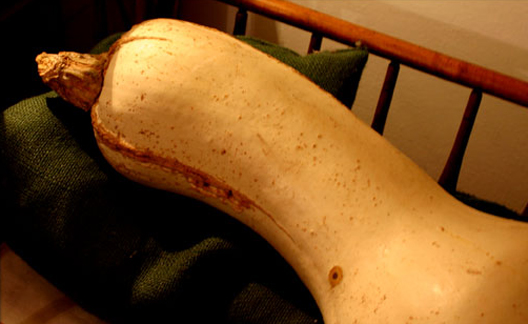 Plate 1. Shmoo In The Cradle (Jonathan’s Pumpkin or White Cushaw), February 5, 2008. As a side note, this particular cushaw weighed in at 20.5 pounds. Now that’s prolific! — the editor Cushaw by Donny Heston Unsuspectingly, I took a packet of Jere Gettle’s white cushaw seeds and planted four hills, each a hoe-handle length…

These old hills are home to a people. A people defined by a region — a people who have come to define that region. It is easy to understand plateaus and highlands, rivers, boundaries. It is not so easy to understand a people, a culture, a sensibility. These old hills are rugged. Long ago, they attracted the desperate, the independent. The foolish.

Frenchman from New Orleans. Early British pioneers. Poor Irish immigrants, then black-dirt farmers from Indiana and Illinois. Southerners to establish Missouri as a slave state. Unionists from Ohio and Iowa. German immigrants by the scores, with high-minded sensibilities, organizational skills and a desire to escape political persecution in Europe. The foolish died quickly or moved away. The independent flourished.

LISTEN TO THE OZARKS

About the Ozarks (continued)...

In the 19th century, the Ozarks were a lonely, dangerous place. And what little law and order existed before the ravages of war, there was none after. Stories of deadly bushwhackers, Baldknobbers and just plain-out-and-out-coldblooded killers make for romantic legends today. It wasn’t too romantic at the time.

Out of that hardness was bred a people — a people defined as stalwart, laconic, distrustful. A people self-reliant. To define the Ozark region by its culture? Some would say these peoples are a microcosm of all that makes the United States what it is. This State of the Ozarks.