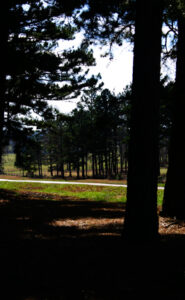 A shadowed stand of yellow pine frame the entrance to Valley Center, creating a contrast of sunlight and deep black. November 9, 2008.

The Christian faith was an instrument of change in the Ozarks — transitioning the hills to a place now known for its peace and its warmth.

Remember, not long ago, these hills were a war-zone with roaming bushwhackers, vigilantes, and very little peace or justice.

These days, the Christian faith is often-regarded as out-of-date and out-of-touch. It’s important to remember just what that very faith can accomplish when given a chance.

The results can be beautiful…

Christian Faith in the Ozarks

Is Christian faith in the Ozarks? It absolutely is! One example is Silver Dollar City which does a great job of capturing the flavor of the Ozarks. I was told by a gentleman who worked there that, to him, Branson and this area, is different from any other place that he knew. He had been in the navy and had traveled all over the world. 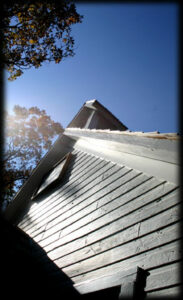 There is just a feel. It is just different, and again, I think Silver Dollar City captures that feel.

As far as living in the hills, some are the real deal. And they enjoy that kind of lifestyle and culture and it gets portrayed. And one of the aspects of that is of faith. Of faith that Jesus was real, that he was resurrected, that he is still living.

That’s who they put their faith in and it shows. It shows in the genuine friendliness they have. So the Ozarks are a very warm place. — John Tilden