Before the tourist trade, before the damming of the White River, before the building of the railroad, there were the people of the Ozark hills. 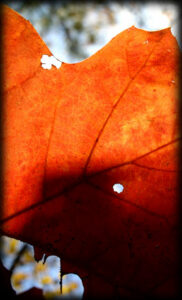 Oak Leaf Detail. A brilliant afternoon sun creates a mosaic of design through a tattered oak leaf against a blue autumn sky.
The tapestry of autumn proves a rich backdrop for many traditional Ozark stories. October 28, 2006.

Prior to American statehood, the Ozarks were home to a broad mix of pioneers, trappers, early French settlers and Native Americans, predominately of Osage and Quapaw groups.* Later, large numbers of Cherokee were forced into the western edges of the Ozark Mountains in present-day Oklahoma.

The years have also seen an influx of people from the Upper South, the Deep South, and the Midwest (according to Harold Bell Wright, Old Matt and Aunt Molly were from Illinois after all).

The region also saw a rise in African-American culture, due in large part to the movement of Southern slave-owners into the region prior to the Civil War. 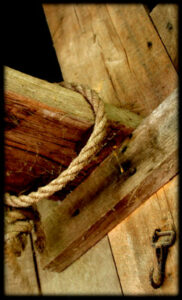 Detail of a barn located between Taneyville and Kissee Mills, Missouri.

In the latter half of the nineteenth century, Missouri became home to many German and Irish immigrants.

People have come to the Ozarks for many different reasons. But, upon arrival, culminating forces forged a unique group.

Not “hillbillies” of comic lore, but Hill People proud of their heritage and closely connected to the land and those around them.

It is these diverse and proud peoples that State of the Ozarks honors and celebrates.