The Ozarks have been a tourist destination for so long, tourism itself has become a historical icon and a part of the region’s heritage.

It is indeed ironic that The Shepherd of the Hills was written by Harold Bell Wright to celebrate the unspoiled Ozark Mountains and even lament the threat of change — modernity coming to the hills. 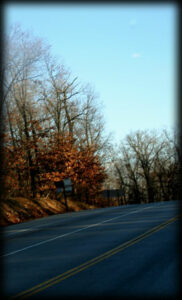 Highway 76 near Silver Dollar City is quieter near the end of a successful season. December 31, 2006.

In large part because of the book’s success, Wright directly contributed to the mass influx of tourists into the White River Hills during the 20th century and laid the groundwork for the entertainment phenomenon that became Branson, Missouri.

However, his initial work also contributed to a sense of place and a sense of identity among the hill folk of Missouri and Arkansas.

Perhaps, in the end, it will balance out.

Traveling Through The Ozarks, circa 1923 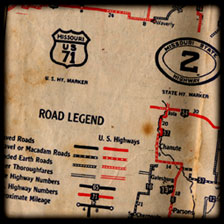 “We arrived home from our automobile trip to Louisiana a few days ago, and I found Louisiana a much more delightful place than I had anticipated. The weather is usually pleasant, though the sun is warm; in the shade it is cooling. The nights are very pleasant. It rains apparently with no natural reason, just opening up the windows of heaven and throwing all the moisture out at once. Then in a short time the clouds roll by and it clears up and is cooler.

When we went down we crossed the Missouri River at Jefferson City, Missouri, and went through the Ozarks to Little Rock, Arkansas. I tell you, going through the Ozarks was almost like enchantment — such scenery and beautiful little rivers. Great springs burst from the earth and their waters start toward the sea in crystal splendor. 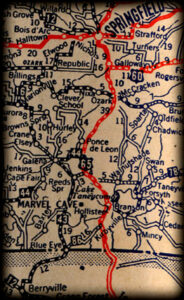 It seems to be a realm of mystery. There are caverns penetrating the hills from which quaint echoes resound like voices from the past. Then we crossed the White River meandering its way through the undulating scene, with their timbered investments and rock-bound crests. This part of the way was somewhat rugged.

After Arkansas, we passed over into the old Creole State. Here again was beauty beyond ordinary telling. Upon either side of the perfectly graveled highways stood the virgin pines with their tall foliage high toward the zenith, forming a canopied avenue which appeared to come to a point in the far distance, but which one never reached.

Here we were obscured from the sun’s glow and the falling mist of a passing cloud would never have found us. And just think of this for a day’s journey. In due course of time we reached Alexandria, one of the pretty and prosperous cities of the state, and thence to the home of our relatives in the pine country.”