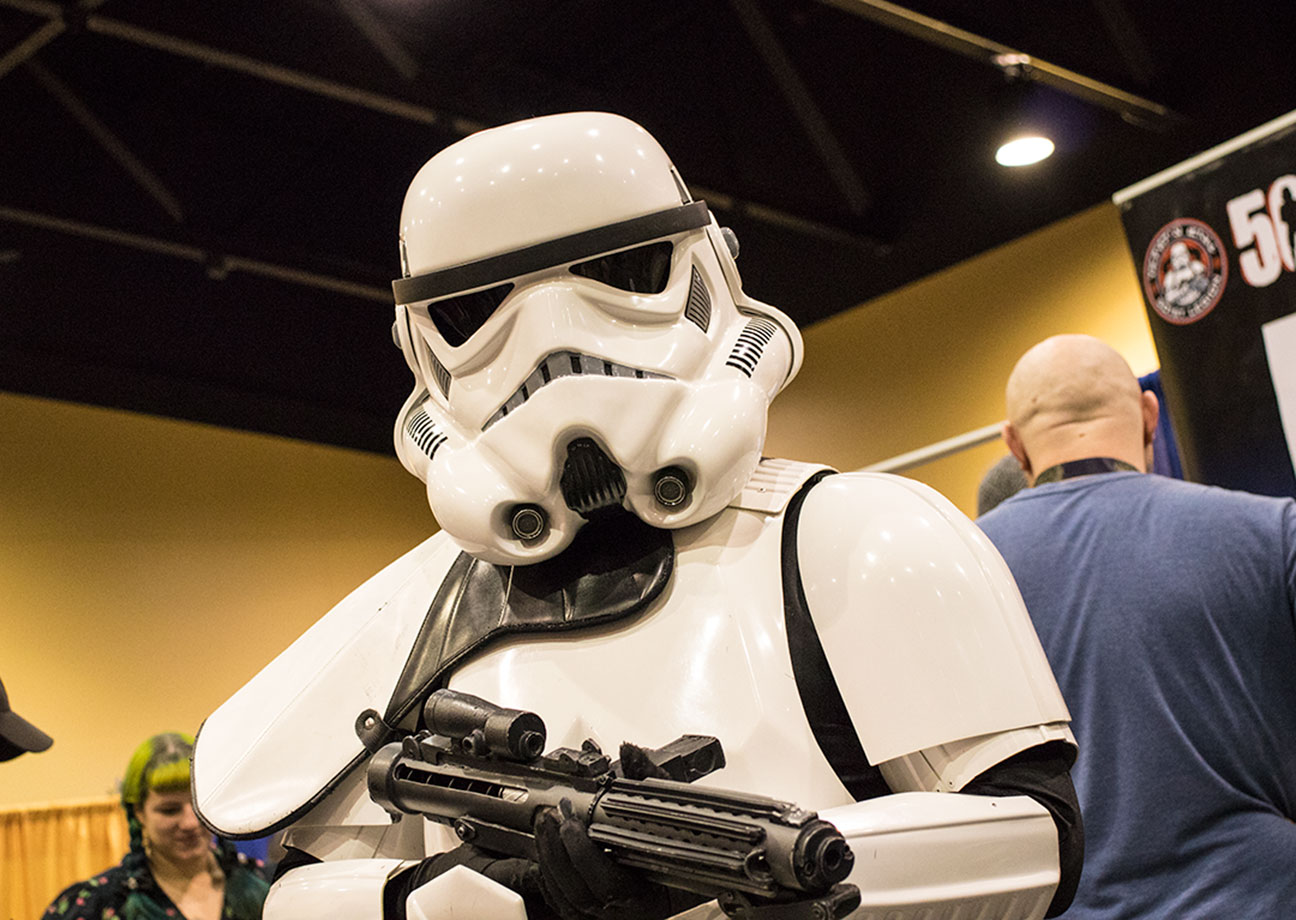 Do you know that feeling? The scared-yet-super-excited feeling of going somewhere you have never been before and doing something you have never done before? Well, that’s what I felt on the February 23, 2018, at Visioncon in Branson, Missouri.

The Hilton Convention Center brimmed with dozens of colorful booths. Lining the rough grey concrete walls and filling the middle of two gigantic exhibition halls, you could find pretty much anything you wanted. Vendors were selling anything from real katanas to beautiful works of digital and traditional art. Packed into a tight but well-coordinated schedule, people from all walks of life gave lectures on a wide variety of subjects, ranging from Ozarkian and Irish history to filmmaking and social media.

The largest single booth was the 501st Legion, a volunteer Star Wars cosplay group with more that 7,000 members worldwide. Amid the band of stormtroopers, two full-scale R2 D2’s (one red, the other blue) drove about playing music and making comical beeps. Both droids were fully articulated and moved freely around the Convention Center under the supervision of a member from the 501st.

A great moment of Visioncon’s second day was the Star Wars’ fashion show. There, stormtroopers strutted down the runway to the beat of a pulsating bass.

Artists from throughout the region gather here to show their fantastical work. The convention attracts people from hours away.

Anthony Hunter — talented comic creator/animator — displayed his artwork throughout Visioncon. He is the creator of Silent Sillies and another comic series called Lame Brains. “I’ve been working on my own comics since high school, went to school for animation, and am always coming up with new stories I’d like to make,” Hunter answered via an online interview.

Not far from Hunter’s booth was artist Allen Grimes. Grimes does detailed portraits of movie characters ranging from Bellatrix Lestrange (of the Harry Potter franchise) to the Teenage Mutant Ninja Turtles. He begins each piece by with a hand-drawn sketch that is then scanned. He colors his art digitally.

Another attending artist is Jason Jackson. Jackson paints canvases of fantasy characters from many pop-culture genres, including Star Wars and Batman. Based in Springfield, Missouri, Jackson started a company he called Concept 24.

“Basically the concept is, ‘Use what you have.’ What ever gifts, talents you have, use them for good every single day,” Jackson explained during an interview with Joshua Heston. “We all have gifts,” Jackson continued,  “And we all have passions and every day’s a new 24. A new day. So it is your responsibility to use what you have to do good and to inspire other people to use what they have. And I think that is how we can make the world a better place.”

Visioncon was started by The Visionary Guild in 1992. The first convention was hosted February 14-16 of that year. Since then, Visioncon has developed into an event that thousands of Ozarkers attend. From the beginning, the team’s goal was to provide a family-friendly event for all ages and raise money for local charities. Over the last quarter-century, this non-profit consortium of geeks, nerds and community volunteers have raised tens of thousands of dollars for the community.

“As a volunteer with Visioncon, my main goal is to help foster the best environment for extreme fans of nerd culture and folks who don’t really know anything about fandoms, cosplay and comics alike to enjoy an awesome weekend that also raises money for charity,” commented Sara Karnes, journalist and convention volunteer.

The volunteers who put Visioncon together begin months in advance so as to bring attendees the best possible experience.

Adam Bass, another Visioncon volunteer, shared in an online interview, “Since I joined, [the convention] has grown exponentially every year and we have huge things in the works for 2019 already. It’s very exciting.”

Patrick Hall, Ghostbuster of the Ozarks, noted, “My love for cosplay had originally been inspired by the Ghostbusters movies. I had a fascination with the props and costumes that were featured in the various media that had centered on Ghostbusters. So I joined a forum back in 2010 to learn how to make my own proton pack — frankly, it wasn’t that good — and it was off to the races. Later that year in October, two other local members of that forum and myself met for our first meeting of The Springfield Ghostbusters. It was shortly thereafter when we had various other people join us from the Ozarks area and rebranded ourselves as The Ghostbusters of the Ozarks.”

It is easy to feel safe at Visioncon. Security here is very kind. As Joshua Heston (editor-in-chieftain of StateoftheOzarks), Dale Grubaugh (publisher of StateoftheOzarks) and I were prepping to leave the convention at the end of the day, Mark Fairleigh — who was dressed like a badass S.W.A.T captain and who, in fact, heads up Visioncon security — stopped by to introduce himself quietly and assure us our equipment and booth wold be safe overnight.

And all that brings us to cosplay.

Costumed + Play. Sadly, cosplaying is still looked down on by many in the general public and it’s easy to get nervous about “dressing up in public” when it’s not even Halloween. So, I reached out to a number of participants to get their advice.

Sara Karnes — “Baby steps! Not sure you want to rock full body armor? Try a smaller item (like maybe just a shield) and work your way up from there. If your family doesn’t approve, I’m so sorry to hear that. Maybe you can try talking to them or showing them how much you love it. You never know, they may come around. If they don’t, well, that’s their loss. You’re a beautiful butterfly and should do what makes you happy!”

Jeffrey Markus — “Find your passion and do it! Don’t let anyone tell you that you cannot do something or you shouldn’t. Walt Disney was fired from a newspaper in Kansas because the editor said he lacked creativity; nobody had a clue who the Wright brothers were until a couple days after they had [achieved] powered flight! Everyone’s passion is different. Maybe making cosplay is not yours, maybe its photography, maybe its web design, if you find that for whatever reason you cannot do what you love, there is a way that you can still be part of that world. Don’t be afraid to ask for help. That is what all of us did. A good friend of [mine] Jeff Houghton has a quote, ‘Make something where you are.’ That is exactly what we did.”

One of my best memories of Visioncon was following — and filming — Joshua Heston (cosplaying as Cernunnos, Celtic Lord of the Forest) and Kaitlyn Robinson (Lady Krampus) as they tossed a synthetic skull named Bertram back and forth in a macabre tongue-and-cheek game of hot potato. Bertram had been hand-made by Michael Amburn of Druidcraft Props who was in attendance as a “post-apocalyptic unicorn warrior.”

Random convention-goers got in on the action as the skull flew.

As things wound down for the night on Saturday the 25th, the exhibit halls slowly emptied. I thought of the apprehension I had when I came here just three days ago. I thought of the nerds, geeks and community members I had gotten to know, each one brimming with kindness, intellect and talent. Despite my fatigue, there was one nagging thought in my mind as I descended the escalator.

“I am really going to miss this!”