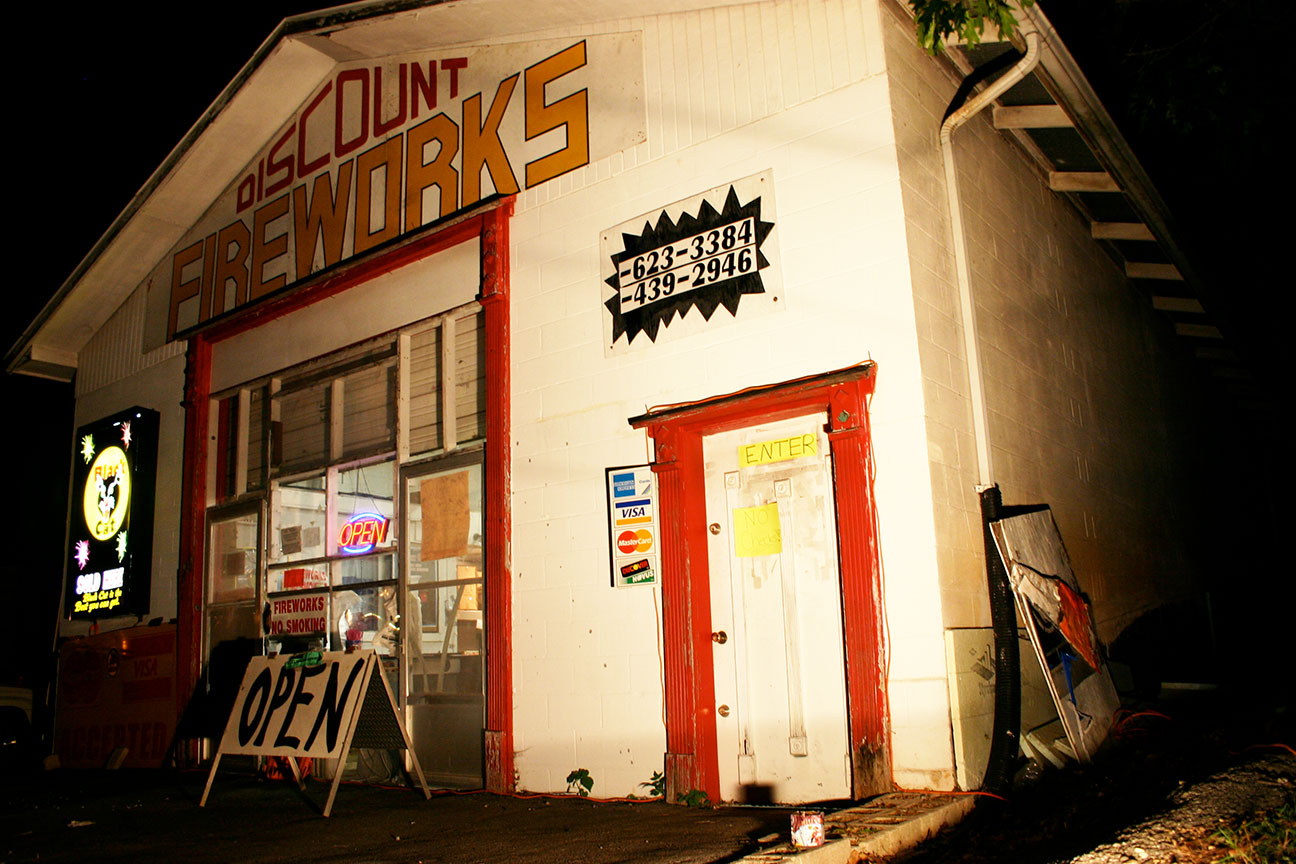 An oscillating fan turned, moving humid air from one aisle to another, cement floor smooth and a little dewy in the hot summer night. The glowing Black Cat sign competed with a red neon Open blinking in the window as Joe Diffie’s Prop Me Up Beside the Jukebox blared from a cheap dollar store radio.

And everywhere you looked was stacks of explosives, floor to ceiling, all wrapped in the brightest, loudest, at-times most distasteful pop art illustrations you could possibly imagine.

The garish, provocative images worked their magic on kids, teenagers and kids-at-heart alike. One man, heavy and sleeveless, moved to the counter — arms full of explosives — with the same giddy and unrestrained enthusiasm as his blond, waif-like daughter tagging behind. Army-minded boys darted among the aisles, comparing the merits of Black Cats versus Moon Rockets. A couple of teenagers in baggy camo carried off a cardboard box loaded with mortar shells.

Is it ironic we celebrate our nation’s birth with tons of small explosives imported from China? Perhaps not. Along with gunpowder, it is generally believed fireworks of all kinds were first made in China beginning in the seventh century. According to some historic records, American colonists were shooting off fireworks well before the United States was, well, united.

Brilliant colors, the tension of a sputtering fuse, booming explosions, the threat of danger. No wonder fireworks are so popular and, in a red state like Missouri, so plentiful. As Fourth of July nears, tents of circus-size proportion crop up like toadstools after a forest rain, filled to the brim with enough explosives to invite the envy of Guy Fawkes, the Catholic anarchist who attempted to blow up British Parliament in 1605.

Firework art is often ignored, especially as most of the illustrations are reduced to blackened paper shrapnel by the morning of July 5. But perhaps it is the cheap, disposable nature of this art that is so intriguing.

Here, in this wildly colorful, imaginative — at times offensive — and expendable art we find a unique vision of summertime, nighttime, and American culture.

After 9/11, there was even a proliferation of Arabian-US conflict art, none of which passed muster with the political-correctness police. Back in 2009, one firework package drew ire from Minnesota Arab groups as it illustrated “men in Middle Eastern-style clothing riding camels with a stealth bomber flying over them. On the other side is an image of Uncle Sam pulling the beard of a graying man in a turban.” The firework in question was titled, “Run Haji Run.”

Um, politically correct firework art ain’t. And much like a circus side show, these illustrations appeal to an unspoken consciousness existing somewhere amongst adolescence, bellicosity, unashamed idealism and tension. For amid the 1950s-era flying saucers, the black bats, the “Midnight Monsoon” or “Golden Shower” sparkler fountains, the “Gorilla Warfare” mortars and the sexy — albeit comic-book inspired — dancing girl twirling sparklers is the unspoken: fireworks are dangerous, unpredictable, and outside the boundaries of a safe, tempered society.

Shooting them off by the score demonstrates our guts.

Loud, rude and risky. As backyards across the Ozarks erupt in mortar smoke this season, it is a riotous reminder: middle America likes to play it big, free and not necessarily safe.

Shoots flaming balls and reports. Use only under close adult supervision. For outdoor use only. Do not hold in hand. Place upright and use only on concrete, asphalt or other flat surface.