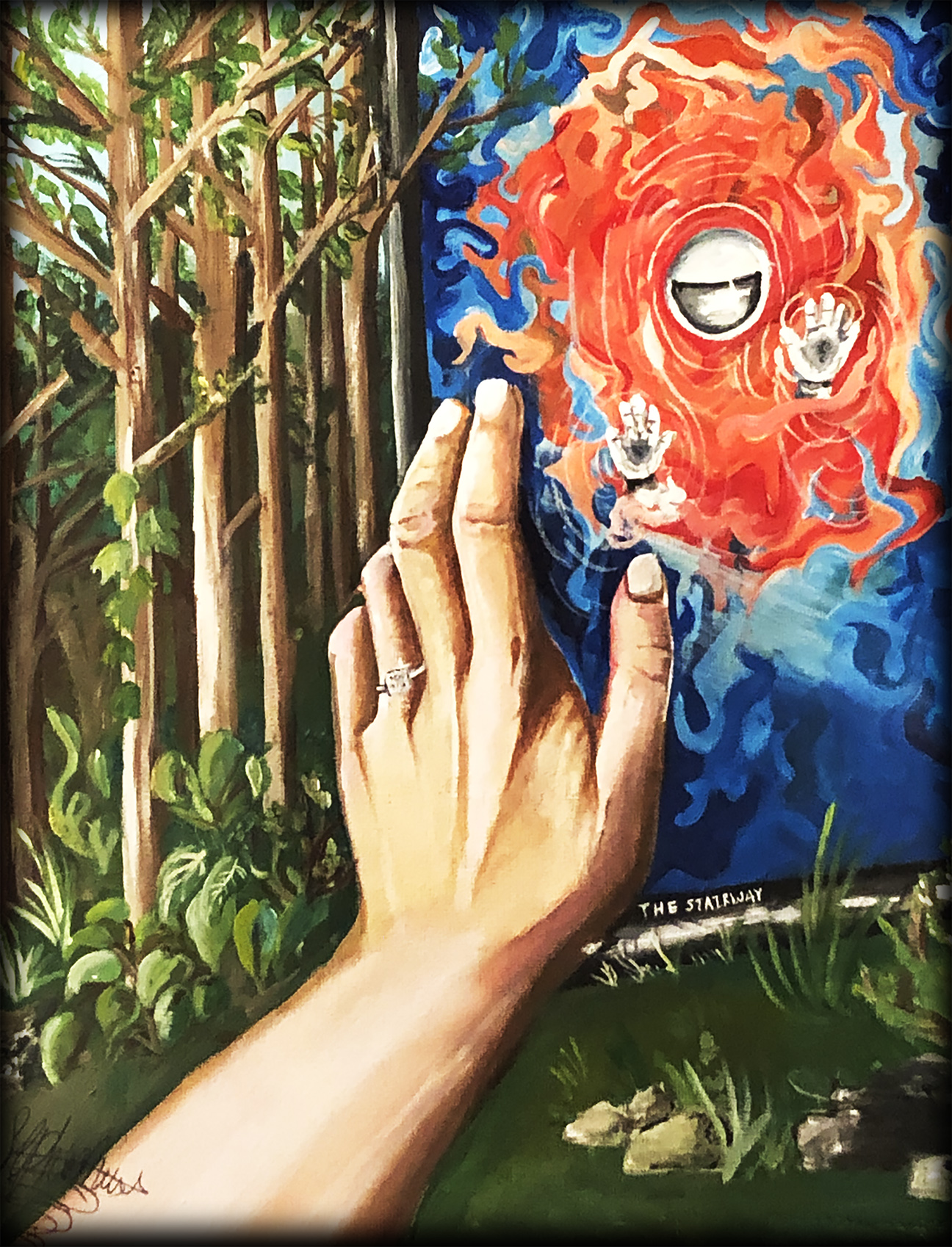 Home. That single word brought vivid images to his fevered mind, comforting scenes that had been with him since he was a child in the Missouri Ozarks. Rolling hills blanketed with an unending number of oak, hickory, and cedar trees. Streams of crystal-clear water, their surfaces shimmering like diamonds in the setting sun. Wind-swept prairies, the yawning mouths of caves, and fields of corn kissed by the summer sun. The memories tumbled upon themselves and then retreated from his mind, each leaving a kernel of hope, hope of surviving.
Pulling himself off the floor of the crashed ship, he stood, swaying from weakness. He wouldn’t die, he couldn’t. He would make it home, home to the Ozarks, home to her. Jake Stanton, inventor and astronaut, would go home. He fixed the image of Jasmine, his wife, in his mind, his mental anchor to the world he had left in order to travel to this world: Mars.

Staggering, he made his way through the smoke, occasionally stumbling over the remains of still smoldering equipment. Reaching the cockpit of the ship, he lifted an emergency release lever and opened the hatch. Steeling himself, he looked inside. The flight crewmembers, all four of them, were clearly dead from the crash landing. Madison, Wright, Takeda, and Gomez. All gone.

Moaning, he leaned against the bulkhead. He was completely alone; there had been five of them on the mission, and only he had survived the crash. He glanced at the remains of his four shipmates. “God help me.”

He didn’t know what had caused the crash, but it really didn’t matter now, only survival did. Summoning what little strength he had left, he turned and made his way to the ship’s cargo hold. The hatch, its metal frame twisted, was open, but just barely. Weak from injuries sustained in the crash, he pulled but the hatch remained impassable. Picking up a pipe that had been torn from a nearby bulkhead during the crash, he was able to pry the door open just enough to squeeze through.

Emergency lighting bathed the room in saffron light. A solitary crate, refrigerator-sized, sat in the middle of the hold, chains securing it to the floor of the hold. Moving closer, he examined the metallic crate. Relief flooded through him; it appeared to be undamaged.

Unhooking the chains, his breathing labored, his forehead beaded with sweat, he fought for control. His vision swam and he nearly blacked out. He was, he realized, running out of time; the air was worsening.

He punched the release code into a keypad set into the metallic crate. “12042014,” he recited. His wife’s birthday. The top and sides retracted into the crate’s back frame leaving only the floor of the crate with the device resting upon a wheeled cart. “Stairway to Heaven.” His voice cracked. Coming to the Red Planet to test his invention had killed four astronauts, four friends.

His head throbbed; he closed his eyes momentarily. Visions of home cascaded through his mind once more, memories of years at university, followed by long years spent working in a lab. The lab, his lab, birthplace of the machine that sat before him.

He opened his eyes and mentally shook himself. He had to activate the Stairway, a matter transmitter, and step through. A doorway through space. One moment on Mars, the next, back home on Earth.

Suddenly, he was lifted from the floor and thrown against the adjacent bulkhead as a blast ripped through the ship. Falling, he screamed in pain as he hit the metal floor, his right leg twisting underneath his body. Blackness overtook him.
“Wake up, Jake.”

A beautiful image floated before him. Jasmine, his wife, sitting in a rocking chair on their cabin’s front porch. Lifting a glass of lemonade, she smiled at him and waved. Jasmine? Was he back on Earth? Had he already stepped through the doorway?

He shook his head. No, he couldn’t have. She was still over a hundred million miles away. He blinked and the hallucination vanished, replaced by the cargo hold filled with thick, acrid smoke.

He tried to pull himself up and screamed in pain. His leg was broken; he was certain of that. Reaching into a pocket, he pulled out a small black case, opened it, and quickly removed a pre-filled syringe, and injected the contents, a painkiller, into his arm.

The pain diminishing, he crawled to a nearby pile of debris. He scavenged two short pieces of twisted metal and placed them within reach. Taking off his tunic, he tore it into strips and then, with the metal pieces, he hurriedly splinted his leg.

Twisting, he was horrified to see angry red flames advancing down the passageway. He was running out of time. He pulled himself from the floor and hobbled over to a still intact wall cabinet, retrieved a spacesuit, and slipped it on, thankful that it would still fit over the splinted leg. Making his way to the Stairway, he activated the wheeled cart the device rested upon, opened the outer hatch, and directed it outside.

Following the cart, he stepped out onto the Martian surface. The light was dim, the distant Sun low on the horizon. Winds swept over the reddish sand, the tiny particles pelting his suit with fervor.

Trudging across the Martian surface, he maneuvered the Stairway to what he judged was a safe distance from the ship. Powering up the device, he waited until the status screen signaled ready, and then turned back to what remained of the ship. “I’m sorry.” Fixing an image of he and Jasmine sitting on their cabin’s porch, he whispered a prayer, and then stepped through the doorway.