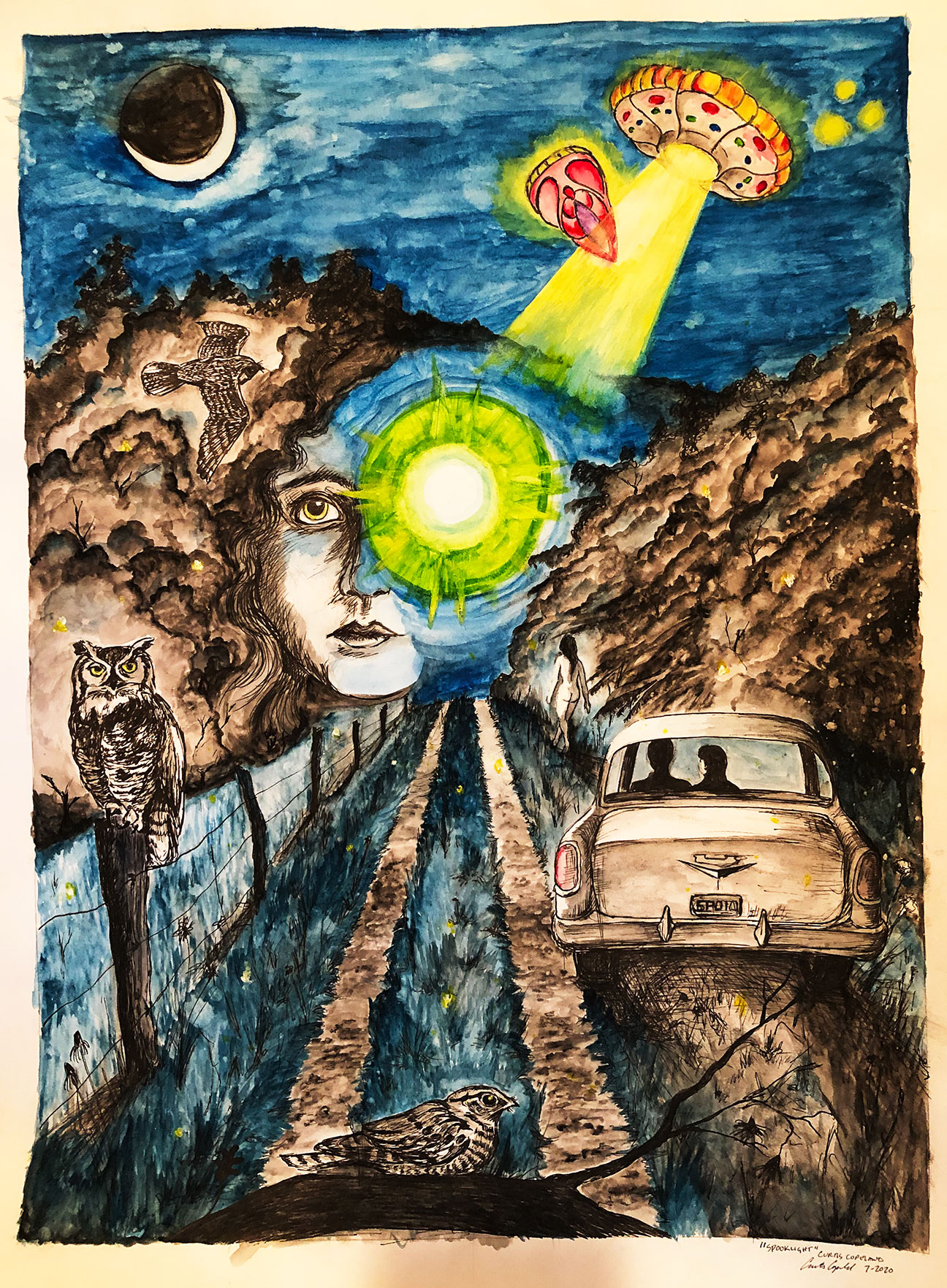 The state of Missouri has its share of anomalies – but the so-called Spooklights, which remain unexplained to this day, are perhaps the strangest phenomena of all.

The Marley Woods is the name given to an undisclosed location in South Central Missouri by ufologist and scientific researcher Ted Phillips and members of his team. The residents don’t want to be disturbed by hordes of people, so they would only agree to having the site investigated if the location was kept secret. The site, which includes many farms and hundreds of acres of property, is a hot spot for paranormal activity with UFO sightings, crop circles, unseen forces that push people, hauntings, and even bigfoot sightings. It was given the name Marley Woods by Ted, but you won’t find it on a map.

One of the most misunderstood phenomena in this area are the strange balls of lights- or spook lights that appear after dusk. The lights have been reported by residents for many generations. In 1989 children playing on a trampoline were startled when they saw a glowing white ball of light that hovered in a nearby tree. The tree died within two weeks.

A man and wife who live in the area saw two balls of light approximately the size of basketballs on a fast collision course. The man threw himself and his wife to the ground, believing that there would be some type of explosion, but nothing occurred, and the lights simply dissipated after crashing into each other.

Ted and his team have witnessed strange unexplained lights dozens of times during night investigations. No source can ever be found for the phenomena and they ruled out car lights, helicopters, swamp gas, and flashlights. The lights continue to spook people to this day.

The Piedmont Lights have been seen in the area since the 1870s. Marilyn Jackson was age 93 at the time I interviewed her in 1996. She was fully cognizant and said that when she was a young child baseball sized white lights would come out of the woods at night, and she and her cousins would actually play with them. The children held out their hands and the lights would come forward and land on their palms. The kids then tossed the lights back into the woods, and they would return to the children. Marilyn said that she would often play with the lights for hours on end. The entire family, including her mother and grandmother said they played with the lights as children as well. The family associated the lights with UFO’s which sometimes appeared over their property.

Dr. Harley Rutledge, professor of physics at Southeast Missouri State University and his team of student volunteers investigated this location after the wave of UFO reports and unexplained lights sightings in and near Piedmont, MO in the early 1970’s. Rutledge used high-tech equipment including RF spectrum analyzers, Questar telescopes, low-high frequency audio detectors, cameras, and a galvanometer. In 1973 Rutledge logged several hundred hours of observation time. He describes the study in his now out of print book Project Identification: The first Scientific Study of UFO Phenomena, in which he noted that the lights behaved in a way that defied known physics. Rutledge said that some of the objects observed appeared to be craft of some type, while others, such as blue orbs that drifted across fields appeared to be some other type of phenomena.

The Hornet Spooklight AKA Joplin Spook Light, Devil’s Jack-O’-Lantern, Ozark Spook Light, Ghost Light, or Hollis Light appears along a short stretch of road and nearby roads between southwestern Missouri and southeast Kansas and Oklahoma, near the small town of Hornet, Missouri. The area is [near the] the Devil’s Promenade. The earliest reports trace back 200 years by the local Quapaw Indians. Some say it is the ghost of a Civil War Soldier, others say it is the ghost of a Native American in search of his lost head. In yet another folk tale, the lights are the remains of a white farmer and Native man who killed each other.

There once was a museum dedicated to the light. Leslie Robertson operated the museum where he offered booklets, photographs and a viewing platform for people to observe the light. His interest was spurred when in 1906 at the age of 14 he saw the light for the first time. It wouldn’t be his last, as he said he saw it thousands of times.

I visited the site in 2016 along with two other paranormal investigators. John Cruzan was very familiar with the Spooklight, as he had visited the site at least 200 times and saw it on multiple occasions.

We pulled our vehicles onto the side of a stretch of road where there are no houses, got out, and cameras in hand, waited for the Spooklight to appear. John told us to be very quiet and wait for it to approach us. After about an hour, we noticed a golden light appear at the end of the road facing west into Oklahoma. The light slowly got bigger, then a second, smaller light appeared next to it. We watched as it came nearer and stopped approximately 80 feet away from us in the middle of the road. This was no car light or swamp gas. As we watched the glowing orb, we noticed three moving lights in the sky, which then moved north at a slow rate of speed. It appeared as if it were one large craft. We also saw glowing bluish small lights in the trees and on the ground that we could not explain, and heard calls in the woods that sounded like Native American or perhaps Sasquatch whoops. At that point, around midnight, we decided it was time to clear out of there and come back another day.

Whether the spook lights are spirits, beings, or a natural phenomenon, many researchers to date have not solved the matter. Perhaps the lights will remain an unsolved mystery forever.

Magic of the Hillfolk Herbalism
August 27, 2019