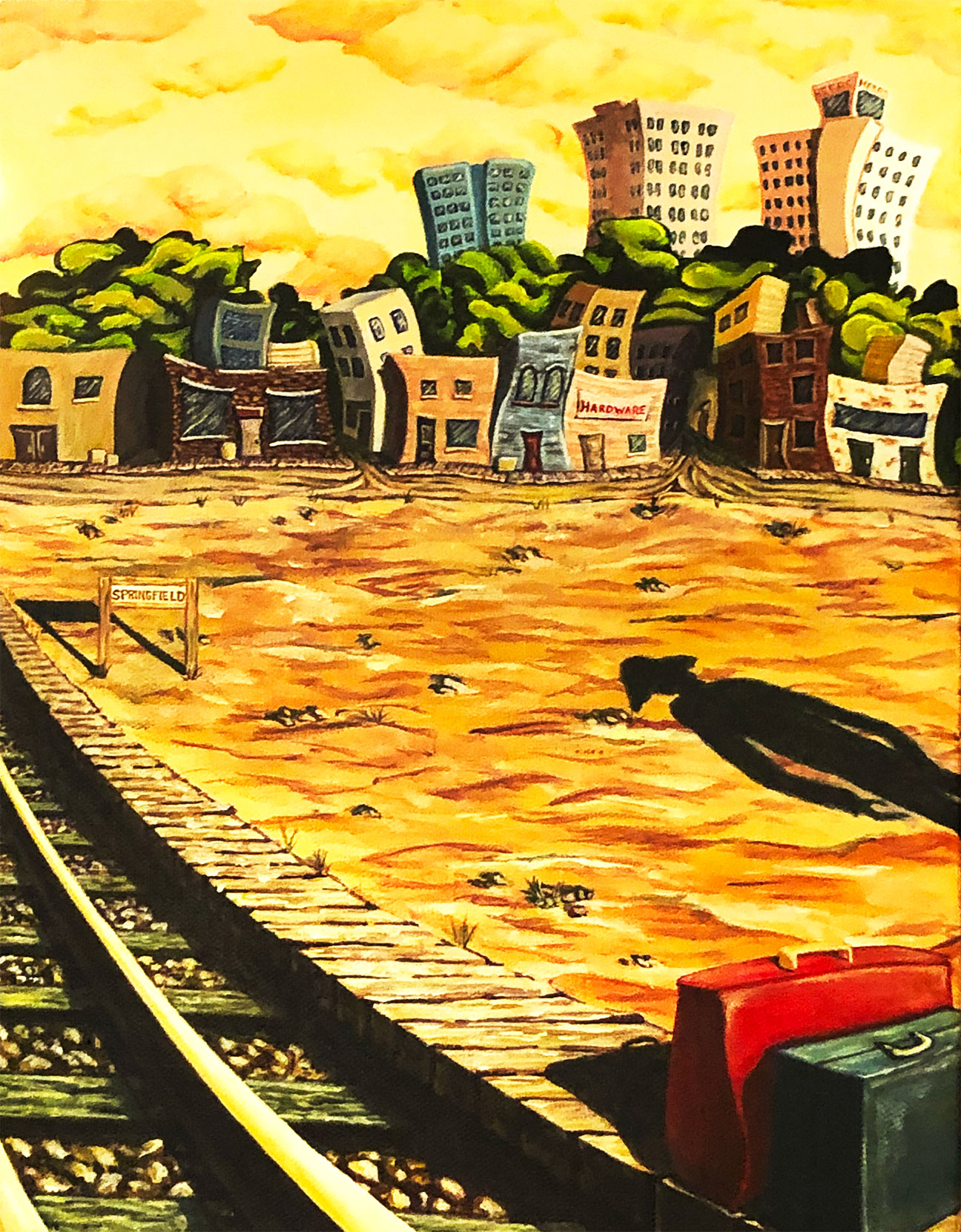 The train stopped at Mountain Grove and Seymour to exchange passengers before racing on to Springfield. Ivy was absolutely amazed. He had never dreamed of traveling this fast in his entire life. On some stretches, the cars were hurtling down the tracks at the breakneck speed of 60 miles an hour. A journey of this distance by horse and wagon would take at least six days, without incident. However, allowing for layovers, the train would easily make it in four hours. These were truly amazing times!

Leaving the timber and farmland behind, the boy watched the houses quickly multiply. Horses, elegant carriages, and even cars populated the side roads. At the east end of Commercial Street, the train skirted the sprawling North Side Frisco Shops where the roundhouse was located. Here 1,200 men worked in three different shifts building one locomotive every single day. Farther to the northwest, the large three-story brick Frisco Hospital peeked above the trees.

Diverting slowly south toward the Frisco Passenger Station, the belching engine passed close enough for the young man to admire the soaring structures situated on either side of town square. Down Campbell Street, the lofty dome of the Convention Hall sported a colorful sea of fluttering flags and boasted the largest auditorium in the Southwest. Raking the sky to the east, the towering Woodruff Building and the Colonial Hotel neighbored the Frisco Office Building. Closer in the middle, he could see the top of Heer’s observatory and the brand new ten-story Landers’ Building where Merchants’ National Bank had been. Between them all, trolleys crawled on rails like troops of frantic sow bugs burrowing beneath a log.

Hurriedly shuffling to peer out the opposite window, the fourteen-year-old craned his neck to see the turret and tower of the Springfield Post Office. Farther up Boonville, the Green County Courthouse sprawled majestically.

Across the aisle, a distinguished looking gentleman glanced from his paper to check the rustic young fellow, “Son, where are you from?”

“Hmmm…” the passenger politely answered, “I’m not familiar with that town.”

“Ah, I see,” the man’s eyes sparkled beneath the brim of his Derby. Taking more of an interest, he asked, “I bet you’ve never seen a skyscraper, have you?”

Embarrassed for his lack of experience, Ivy shrugged, “I don’t guess I know what one is.”

The fellow chuckled kindly, “Skyscrapers are those tall buildings you’ve been watching.”

Not offended by the information, the teenager marveled, “Well, that’s some pretty tolerable workmanship!”

“They are indeed,” he agreed, neatly folding a copy of the Springfield Leader-Democrat across his lap. “Son, what brings you to our town? Do you have family here?”

“No, sir,” looking a tad forlorn, the boy mumbled, “I am here by myself to find a job on the railroad.”

Leaning closer, the passenger smiled, “Well, then you might be in luck!” Taking a cigar from a vest pocket, the man clipped the end, “My name is Smith, and I work at the Frisco Office Building on Jefferson and Olive.” Holding a small card, he motioned, “Tomorrow morning, take this to the North Side Frisco Shops and tell them you’re looking for a job. They are always hiring stout young men who want to work.”

Ivy beamed, “Thank you, sir! I appreciate your thoughtfulness.”

“Do you have a place to stay?”

The youth shook his head, “No, I figured to look around and maybe find a room.”

“Well, at least for tonight, you might think about the old Metropolitan Hotel on College Street.” The helpful stranger pointed over his shoulder, “They renamed it the Costello about ten years ago. The hotel was once a grand lady before she fell on hard times. But it’s still close and inexpensive.”

Limbering his long legs, the boy stepped out of the Pullman onto the broad siding at the Frisco Passenger Depot. The sun was sliding low in the west, and the day had been tediously long. Tomorrow, the boy would start early looking for work; and if luck was with him, he might even have time to explore.