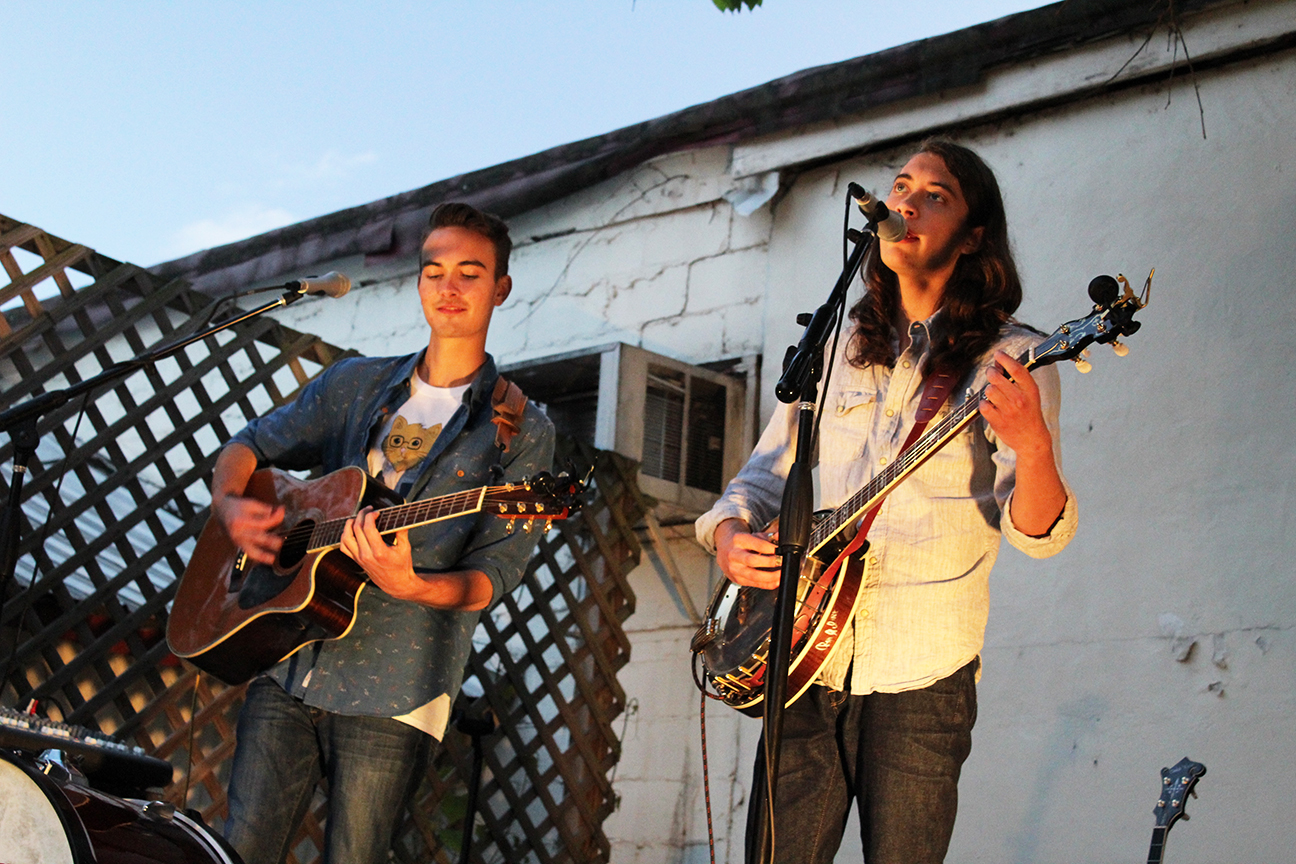 The stage is a small stone platform dressed with instruments. The sun has begun its routine set past the sky, letting the moon push it from our view. And the moon is full. Outside a cozy coffee shop somewhere in a small nook in Hollister, Missouri, I settle into my chair with a warm tea in hand and watch the scene unfold. The patio is strung with vintage-looking lights twinkling just above my head. Grape vines have grown around those strings of lights – casting dancing shadows onto the stage wall. The band prepares for the show. It’s a full movement of behind-the-scenes set up. Excitement and anticipation fill the air. The musicians wait near the side of the stage, cracking knuckles in the dark shadows of the mulberry tree as people begin to file in.

Performing is a young indie band known as Brother Brother. I showed up with no idea what kind of concert I was about to watch or what kind of story I was going to write. I only knew these were young musicians who played indie music (which is rare to find in Branson). If you haven’t guessed already by the name, yes, they are brothers. As they enter the stage everyone falls silent. A hushed blanket is suddenly laid over the crowd and the show begins!

As they start to play, my foot begins to tap to their free-spirited songs. The joy they perform with is contagious. Their music is folk-sounding and has a comforting feel but they perform full of infectious energy and excitement. The brothers (Bradley and Brett Anderson) jump and dance around like a couple of energizer bunnies. Brett, with long hair, flings his hair in rhythm with the tunes. With Bradley on acoustic guitar, kick drum and vocals, and Brett on banjo, electric banjo, mandolin and vocals, their voices give a nice home-sounding blend.

The word “indie” is short for “independent” — meaning independent in writing and producing music. And Brother Brother is very independent. They simply say what is on their hearts. As the Anderson brothers performed song after song, I couldn’t help but want to learn more about these sibling musicians.

“Do you feel as if you might go crazy if you don’t play for awhile?” I ask.

After the show we find a small table in the back of Vintage Paris for an interview. Both Bradley and Brett are shining with the night show’s excitement as I begin to ask questions. Both were introduced to the music world at a young age. Their dad — himself a musician — taught them all knew. They have been writing original material for several years now. With Bradley at 19 and Brett at 17, they feel they make a great team.

“Do you feel as if you might go crazy if you don’t play for a while? Like it’s a yearning you must fill?” I ask. Brett’s eyes get wide as his excitement builds. He says, “Playing at the theater, it’s six days a week and it’s really awesome and we are so, so thankful for it. But it’s nights like tonight that we just love! It’s pure! It’s just going out there and doing exactly what feels right!”

Bradley agrees. “Getting out here where there are a few uncontrollable variables and things could go sideways with the sound and you may not be able to hear yourself and you may be off pitch. It’s the little things like that that just make me feel so alive! You never know who’s going to show up. Like tonight. We didn’t know if three people were going to show up or 30.” Then Brett chuckles, “Or nobody!”

It is an adventure! Not everything is going to be perfect, but that’s the fun in it! At one point, the fan that was supposed to cool them instead became a choking hazard! When long-haired Brett stepped up to the mic and opened his mouth wide to sing a big note, the fan blew his hair into his mouth and down his throat. “So I dropped my banjo, shoved my hand down my neck and yanked the hair out of my throat!” Some people might have been humiliated but he just laughed. Bradley threw his head back and laughed as well. “I thought I heard you choking!”

“Have you found that playing together as brothers has drawn you closer together?” Brett answered, “Yeah, I don’t know what I’d do without him.”  Bradley’s reply sounded more brotherly, “Nah, I just keep him around. He looks good on stage!” They both give each other a brotherly nudge as Bradley continues, “The kind of conversation music brings about, especially when you’re writing something you actually feel, opens up your feelings in a way that almost nothing really would. And when you’re co-writing it’s like you’re sharing that connection. It’s a really cool tool in a way to unlock a relationship!”

“And this way runs the trail that lies along the higher, sunlit hills where those who journey see afar and the light lingers even when the day is done.”

Brother Brother… Continued from above

Brett agrees, “Yeah, I probably know more about Bradley than I should. His ins and outs, because those are the things he expresses through his music.” They smile at each other and Bradley returns with a friendly, “Back at ya!”

Bradley and Brett have a home-grown sort of spirit and you can tell it by their music. They loved growing up on their farm in Sarasota County, Florida.  “There is just something about it,” shares Bradley. “You get outside every day, at least two to three hours a day, whether it rains or shines. You just kinda get alone time, quiet time, outside time…soul time.” Bradley and Brett began performing in Florida with a group of sisters needing a backup band. When the sisters moved to Colorado, the brothers were asked to fill in, not just as musicians but as vocalists as well. “What? Sing? No, no! We don’t sing,” the brothers said.

You need to learn!” was the reply. So they learned and began performing as a duo. One day while performing at a farmers market, they ran into Jim Stafford. There he sat, wearing a big hat and sunglasses and shredding the neck of a guitar at a guitar booth. The booth owner asked, ”Who are you?” “Jim Stafford!” was the reply. Bradley and Brett happened to be standing nearby, overheard him and introduced themselves. Stafford asked them to play a song (Tell the Broken Heart was their pick) and they gave Stafford a CD.

After hearing nothing for six months, the brothers began seeing Stafford at random music events (including ones they were performing at). “Out of the blue we just got a call from him asking if we would be interested in coming to perform in his theater in Missouri. We had no idea it was coming! Our parents were awesome and said ‘Yes! Go for it!” Bradley explains. They then moved to Missouri to perform in Jim Stafford’s theater on Branson’s famous 76 Country Boulevard.

“I think one of my favorite ways to write is when you take something that’s old, like a piece of the Bible, and apply it to what you’re dealing with. It’s just a sense of belonging.”

Brother Brother’s songs hold a sense of spiritual peace with a way of lightening the heart and putting a sweet smile on one’s face.  “Inspiration is one of those things, it’s kinda like the wind. You can’t see it but you know it’s there. You can feel it but you never know where it’s going to come from,” furthers Bradley. His brother looks over and grins, “Wow, Bradley! That was really poetic!” Bradley smiles and continues,  “I think one of my favorite ways to write is when you take something that’s old, like a piece of the Bible, and apply it to what you’re dealing with. It’s just a sense of belonging.”

Bradley and Brett’s favorite part of performing is the people. “People react to music like nothing else. I think it’s one of the greatest ways to show love. That and giving somebody money! I don’t know how to make someone happy almost instantly…and it’s a really cool thing because people from all different backgrounds just come together!” Their attitudes are humble and loving. Growing up a musician myself, I know the music world can be tough. But I think their outlook will take them far, making a difference in every heart they reach, spreading joy and connecting with others.

“The minute we will know when to stop is the minute it becomes about us and not about the people and the music,” says Brett. “We don’t want to do this to make ourselves feel better or to bring in a paycheck. If we are not doing it to spread as much love to others as we can there is no reason to be doing it at all.”

Our 18-minute interview draws to an end but I feel like I am already good friends with both brothers. Now it’s time for the behind-the-scenes show to start. The crowd’s gone home. Vintage Paris is making the last few coffees of the night. The moon has now completely pushed the sun past our view and the sky is blanketed in black. And the moon is full.

Cables are wound up. Guitars placed in cases. MICs are broken down. The PA system is trundled to the trunk. All the while, the dance between light and shadow is yet on the stage wall. But now, there is something more beyond the visual dance I see. In our lives we are constantly dancing between light and shadow. We search for answers we don’t even know our souls are asking.

Brother Brother is pouring their hearts out to try to answer those questions through music. They want to help the troubled heart stuck in the shadow and they want to sing love into the flickering light, making it steady once again. The stage lights are turned off now, but the light of the moon takes its place — casting the shadows of empty chairs and a swaying mulberry tree onto the wall — reminding us that, though sometimes it may seem dark, if there are shadows there must also be light.

“The books or the music in which we thought the beauty was located in will betray us if we learn to trust them; it was not in them, it only came through them, and what came through them was longing. These things – the beauty, the memory of our own past are good images of what we really desire; but if they are mistaken for the thing itself they turn into dumb idols, breaking the hearts of their worshipers. For they are not the thing itself; they are only the scent of the flower we have not found, the echo of a tune we have not heard, news from a country we have never yet visited.” — C.S Lewis

Writer Gideon Pellegrino lives in rural Christian County where she milks cows, plays cello and bass, and interns with StateoftheOzarks (when she’s not doing homework). She is only 16.