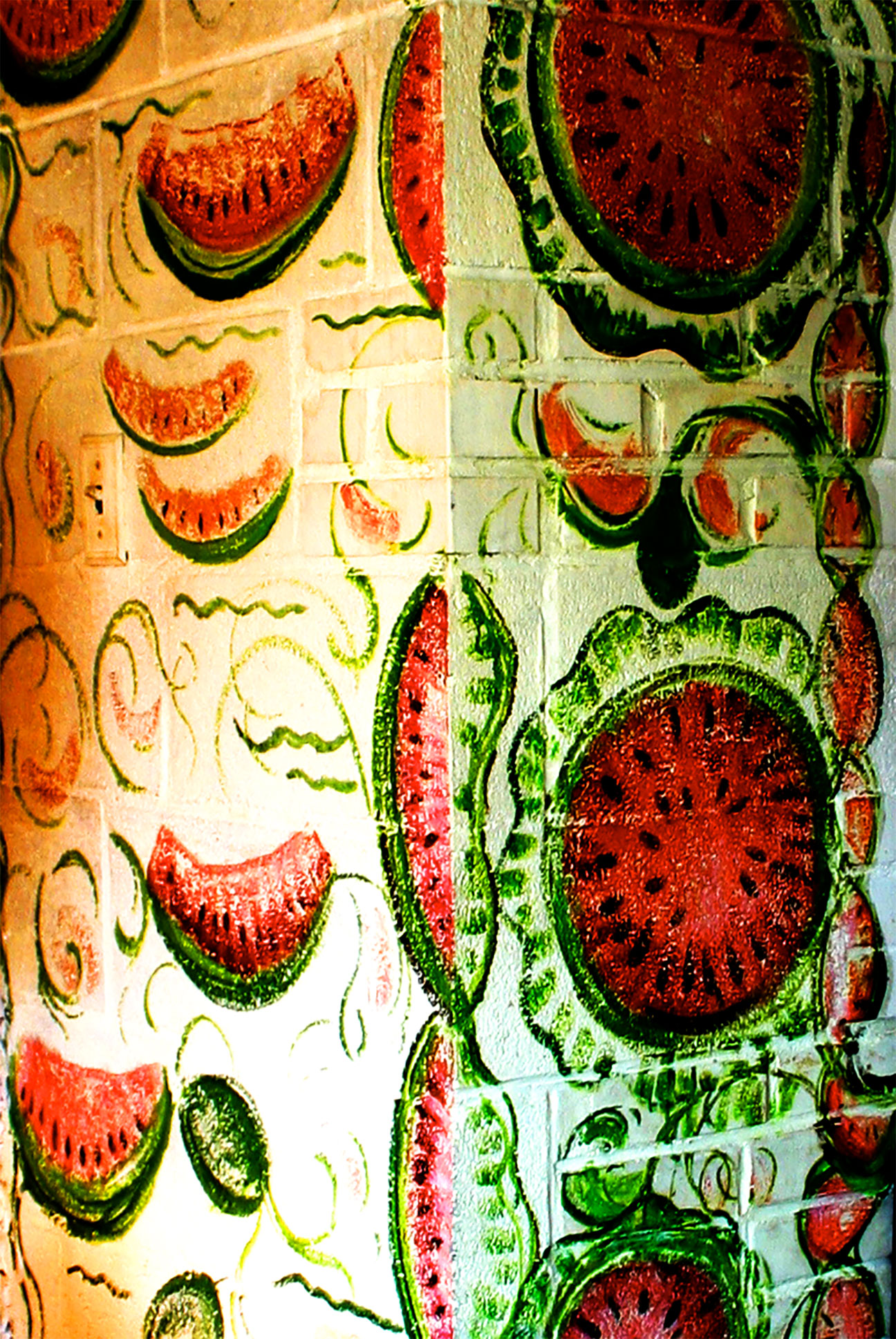 Jumping out of the cracked watermelon was this little tiny guy about the size of Farmer Fowler’s hand. He was funny looking! He had a green hat with a red feather sticking jauntily out of the hat. His face and legs were orange and his stomach was a big black watermelon seed. His shoes were green with striped red stockings.

The little man jumped from the watermelon to the ground singing:

Yodelee dee
Yodelee do
I am the watermelon fairy,
Who are you?

The fairy again repeated his song:

Yodelee dee
Yodelee do
I am the watermelon fairy,
Who are you?

Farmer Fowler realizing he had not watermelon seeds for next year’s planting started to cry. He said to the little man that he was Farmer Fowler.

Yodelee dee
Yodelee do
The Watermlon Fairy am I
Farmer Fowler, why do you cry?

Farmer Fowler asked the little man, “Why are there no seeds in my watermelon?”

The fairy said, “Because I ate them!”

“You ate them cried the farmer, WHY?”

Farmer Fowler explained how and why he and his friends saved the watermelon seeds. This was amazing to the fairy and said, “You mean you take the seeds from one year and plant them the next year and they grow into watermelons again?” “That’s right,” said the farmer. The little man said, “Well, I will be a monkey’s uncle, I sure didn’t know that. I SURE HOPE THOSE SEEDS DON’T START GROWING IN ME!”

The Watermelon Fairy said, “That sounds like RECIRCLING to me.” “No,” said Farmer Fowler, “We calling RECLYCLING.” The fairy said, “When something keeps going round and round, to me that is called RECIRCLING.” Farmer Fowler laughed, “but we call in RECYLCING.” The farmer then explained that without saving the seeds, there would be no more watermelons are apples or other foods planted from seeds.

Yodelee dee
Yodelee do
No More Watermelon Seeds Oh Me.
I will be DEAD indeed!

The Watermelon Fairy told Farmer Fowler that when he traveled from melon to melon he sometimes came upon trash piles that were so big that the trash killed all of the watermelons and other things that grew near by. The fairy asked the farmer, “Why don’t people RECIRCLE all of their trash, not just seeds?”

The Watermelon Fairy, “I bet trash is killing more than watermelon plants and other vegetation. With all the hunk lying around, I am beginning to think it will also kill me and the other fairies. “You are right” said Farmer Fowler, “plastic bottles are being thrown into our oceans, rivers and streams and killing our fish, Our parks are being littered and our fields are being loaded with chemicals that are washing into our lakes and rivers everyday.”

Yodelee dee
Yodelee do
The trash is going to get,
Me and you!

Farmer Fowler then said, “Let me make you a deal. I need seeds for next year or all my friends that count on my watermelons will be sad and disappointed.”

The Watermelon Fairy began jumping up and down:

For me and you.

I need seeds to make me grow
You need seeds to next year sow.
Working together, how great we will be
Watermelons for you friends
And some seeds for me.

Yodelee dee
Yodelee do
Let’s help others be
Happy too!

They also agreed to help make others happy by saving watermelon seeds and putting them in a cup. During the night the fairies will fly by and get the seeds and share them with Farmer Fowler.

“If you cut into a watermelon and there are no seeds, you will know that a Watermelon Fairy has been there and ate his share of the seeds and shared the remainder with Farmer Fowler.” Many times in the grocery store you will see signs saying, “SEEDLESS WATERMELONS.” It indicates a Watermelon Fairy has been there and collected his and Farmer Fowler’s seeds under the “FOWLER-FAIRY AGREEMENT.”

The proper sign at the grocery store should read, “FAIRY APPROVED WATERMELONS.” That way everyone would know that the Fairies and Farmer Fowler all received their share of seeds, thereby making both the Fairies and ALL OF FARMER FOWLERS FRIENDS HAPPY to have worked together for the good of everyone.

So everyone, enjoy eating watermelons and remember to RECIRCLE or RECYCLE and ALWAYS remember to pick-up your TRASH!