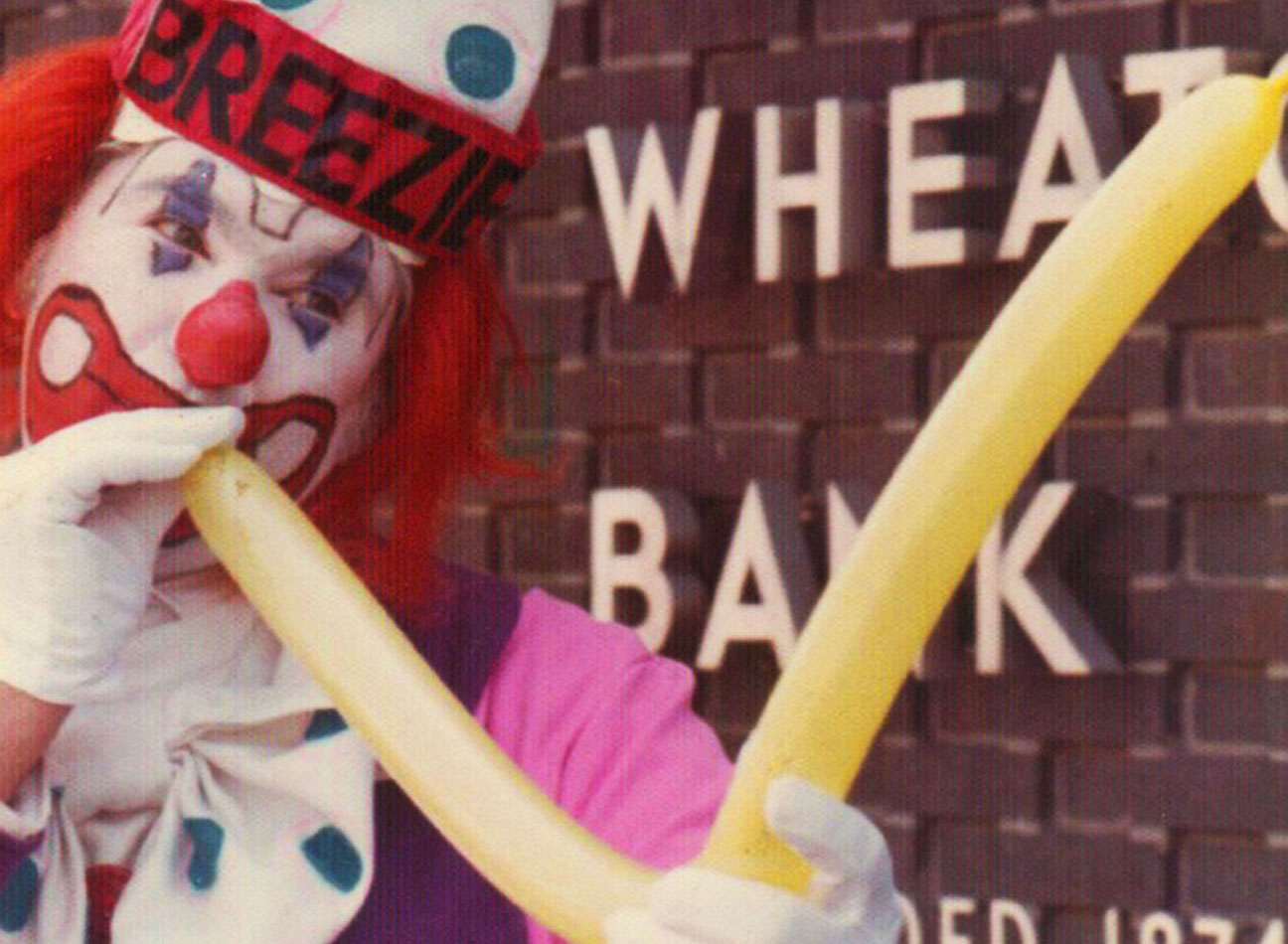 I Have Seen the Elephant
by Pat Craig

Even so, the farmer declared “I don’t care, for I have seen the elephant.”

In 1976, I was making a pretty good part-time income as a clown/magician doing children’s shows and birthday parties. Through the grapevine I had heard that a forward-looking bank in the Chicago suburb of Wheaton, Illinois, was looking for a way to appeal to children “savers” and through that, encourage business from their parents.

Being somewhat of a “go-getter,” I contacted the bank’s marketing department, and — after a number of meetings and presentations — the promotion known as “Breezy the Clown’s Junior Savers’ Club came into being. It was almost an immediate hit with the children and their young parents as every Saturday Breezy would be in the bank lobby sculpting balloon animals and clowning with the kids and their parents.

As the promotion grew, the bank sponsored a magic show titled “Breezy’s Circus of Fun” that was greatly in demand by the local schools, churches and, surprisingly, nursing homes.

It was coming into summer and the bank wanted to participate in the Independence Day parade so one of the marketing VPs thought it would be a great idea to have Breezy riding an elephant as the bank’s parade entry.

Inquiries were pursued, arrangements were made and the required permits — who knew you needed a city permit to ride an elephant in a parade? — were obtained. I had never ridden an elephant before, but since circus showgirls do it all the time, I figured it couldn’t be too difficult. Silly clown!

July the Fourth dawned hot, sunny and humid and I was up early to apply greasepaint and get into wardrobe, transforming myself from a 30-year-old human being into “Breezy the Magic Clown.”

Arriving at the parade staging area two hours in advance of step-off time for the parade, I was introduced to Isabelle the Elephant (and her disreputable looking Carney owner Felix). Although I had never ridden an elephant before, I had been in proximity to elephants and was not unfamiliar with their particular “perfume.”

Compared to Felix, however, Isabelle smelled like crushed rosebuds.

There is a set procedure for mounting an elephant no matter if you are a Mahout, a showgirl, or a 6’3” clown:

You grasp the beast’s head harness, place your left foot into the curled end of the trunk — at which point the animal slings you upward — and, if you are lucky, you end up astride of the pachyderm’s thick neck. Scary stuff for a first-time elephant jockey.

Up until that day, Breezy had always performed indoors where it was comfortably warm in the winter and comfortably cool in the summer. This day the temperature was already 92° at 10:30AM with 75 percent humidity.

Under the best of circumstances, a clown’s greasepaint makeup can be a bit uncomfortable since to keep it from smearing it must be well-covered with talcum powder. Add high humidity and 90°+ temperatures and your skin itches as if you are covered in fire ants.

Generally, the polyester wardrobe was reasonably comfortable, but polyester doesn’t absorb perspiration well and the wardrobe trousers were of a fairly thin material — which caused me to discover another feature of elephants: elephants are covered with a number of sharp hairs that average 3 to 5 inches in length. Many of those sharp hairs found their way through the thin trouser material and into the tender flesh of my inner thighs.

Felix walked us over to our place on the sidewalk in the staging area and told me that Isabelle was well-trained and would not move from where he put her. He then went a little down the block to have a cigarette since Isabelle didn’t like the smell of smoke.

So, there I sat, in full clown regalia, on the neck of an elephant, about an hour before the parade was scheduled to step-off, and I was sweating… profusely. Elephants, however, apparently cannot sweat and Isabelle was as hot and uncomfortable as I was.

We were staged in a rather upscale residential area of town. Just on the other side of some barberry bushes from where we were standing was the backyard of a rather impressive home… with a swimming pool. Isabelle was hot and uncomfortable and not at all happy about having a 200-pound clown sitting on her neck. Smelling the pool within a short distance she decided that she needed to investigate.

Barberry bushes do not phase an animal like that. There is a reason that there is the phrase, She has a hide like an elephant. Humans (or clowns, for that matter) are much more delicate flowers. As Isabelle crashed through the hedge I must have caught every thorn in my lower legs while I hollering like a banshee for Felix to come and rescue me.

An elephant’s trunk is a marvelously adapted instrument. With it, elephants can lift heavy weights, delicately pick up a peanut, use it as an organ for breathing, use it as a siphon for liquids, or turn it into a do-it-yourself shower.

Isabelle made straight for the swimming pool and I had this terrified vision of a clown and an elephant doing a water ballet, but Isabelle had other thoughts in mind. She dipped her trunk into the pool — causing me to almost slip over her head… but not quite — filled her trunk to the brim and then, raising the trunk over her head, sprayed her back — and a now terrified and almost hysterical clown! — with a combination of pool water and elephant snot.

She repeated this three times before Felix, having been informed by some of the other parade participants that his elephant was out of the line of march, so to speak, finally came and retrieved a wet elephant and a soggy clown.

A few minutes later, the parade stepped off and the rest of the event went off with unremarkable smoothness.

So, I have seen the elephant… but if I never see another one, especially under those circumstances, it will be too soon.

Vicki Wilson’s original art, inspired by Pat Craig’s work, I Have Seen the Elephant, and created for the September Writers and Artists Night hosted by StateoftheOzarks. “I was happy to have the opportunity to finish my first piece of artwork using both hands at the same time! I’m so glad the wonderfully written story was about an elephant. I’ve collected them for almost 30 years!” — Vicki Wilson

Breezy the Clown inflates a yellow balloon, circa 1976.

Breezy the Clown and Isabelle in the Chicago-area parade, circa 1976.