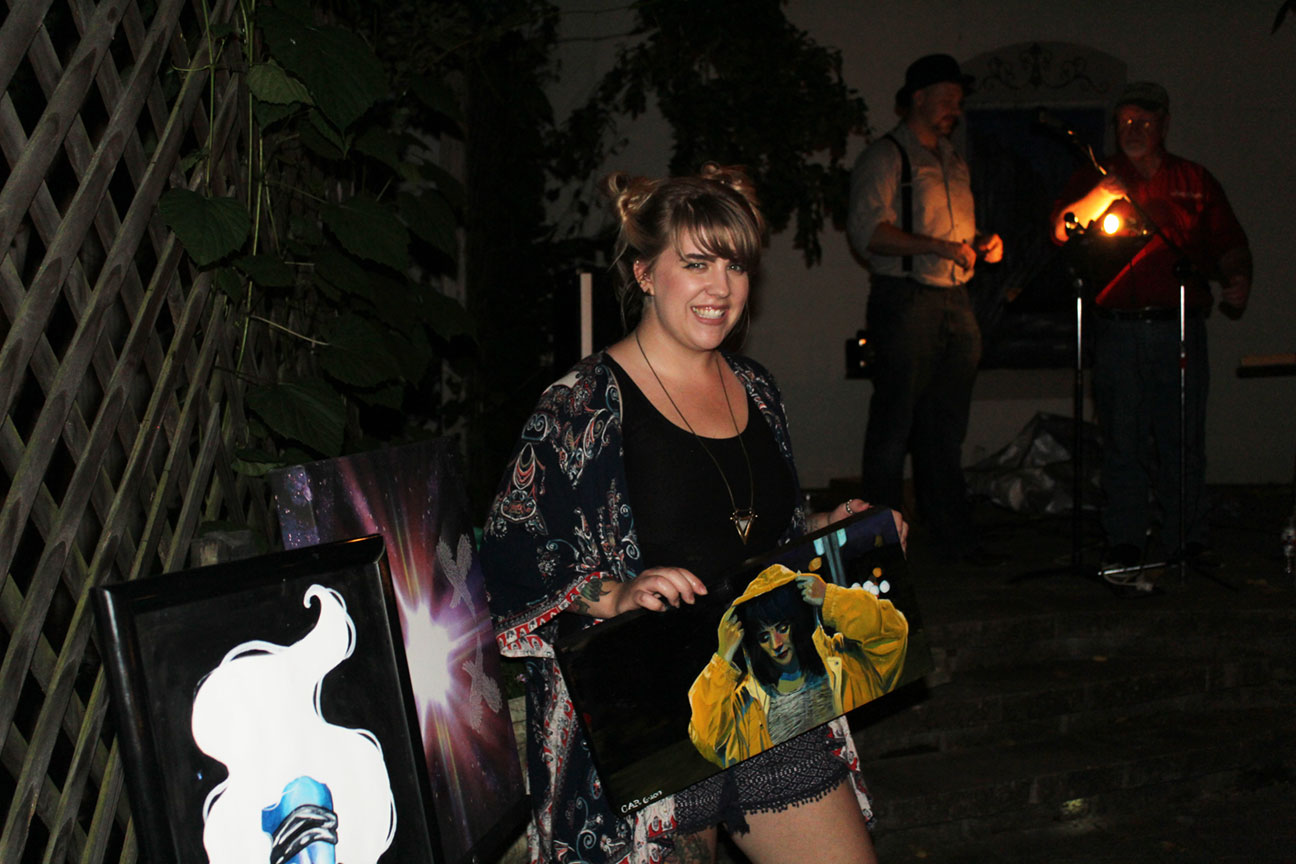 “I’m a visual artist, not a poet,” says Christine Riutzel. “But when I read Medda’s poem, I could see a really strong woman.”

“Baal-perezim woke me up early one morning about five years ago,” explains poet and singer Medda Beam. “A certain line entered my mind while I was still dreaming and struck me as peculiar, which roused me from sleep: Burning my defender, snob breaking my gender…

“It was a strange yet compelling line and I wanted to write it down before I forgot. As soon as I did, the rest came tumbling out…”

It is possible, after all, to fight fire with fire

You have ignited anger in the hearts of powerful ones

To your chagrin and the delight of your captives

Yet for millennia have you not been

A vortex of monstrous pain and suffering?

Foaming at the wet chasm

You have swallowed lives whole

He and we will take no rest

Until they are restored and you have been

Vanquished into your own eddy of despair

Woman hater, woe to you, you devil!

Your defeat will grieve you more than your demise

For it will come at hands you considered insignificant

You never esteemed them as opponents

Yet here they are ascending

Once your propeller, great pride now

Aggravates the sting of your loss

As for those you once subdued in a sea of dismay?

Bubbling, bursting for the joy set before them

And flex muscles no longer fatigued

By the effort of keeping abreast

In an ocean that was never their intended place

Some, unaware that they ever had a body, are

They take heart and hammer, keen for action

In your eyes weak with arrogance,

Their courage is offensive audacity

It was never confidence in themselves–

You saw to that

Therefore, from whence cometh such assurance

Which is truly blessed,

But to you is a curse?

You could not conceive of a man

Who would lead women into battle

A man humble and flint-faced unto slaughter

He was like one of the women to you!

He rationed his own valor without measure

It fostered an unflinching calm;

In the midst of your tempestuous vendetta

You were found shadow-boxing

Your victims are forever dispatched

From the void of your presence

The one who called them away

Stares you dead in the eye, storm,

And utters the dreaded command,