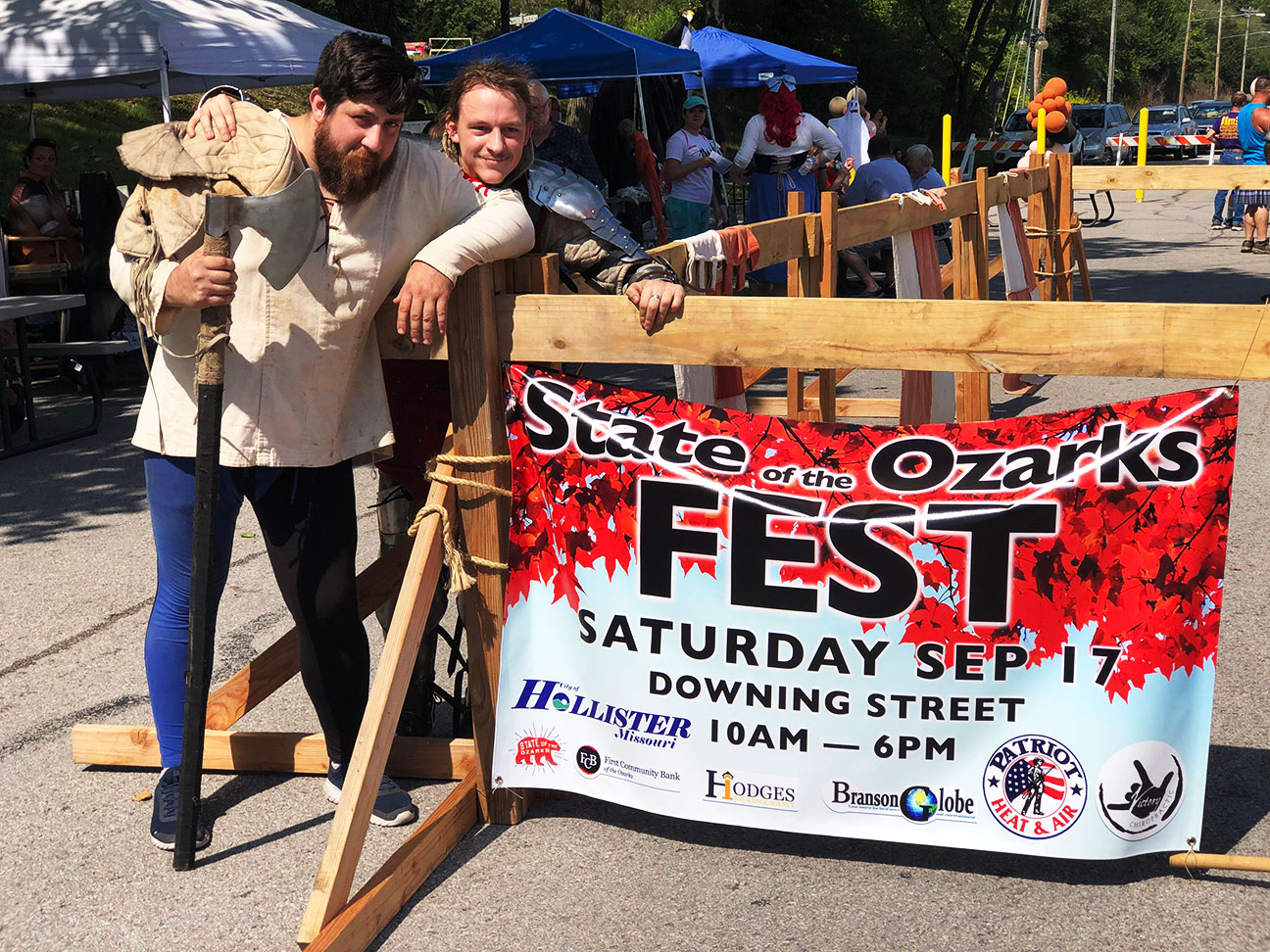 The Order of the Red Boar pose before the noon fight.

“This was our biggest festival,” notes editor-in-chief, Joshua Heston. “We filled 87 booths on the street. It is also looking to be our best attended.”

An arena was constructed that morning to contain the festival’s live steel combat.

Heston works with publisher and Hollister Farmers Market manager Dale Grubaugh to create the festival. “Josh handles the marketing, mapping and promotion. I take care of infrastructure and working out a lot of internal logistics,” says Grubaugh. “We could not do this every year without the hardworking support of the FFA and the City.” Both men worked throughout Saturday, Grubaugh managing the farmers market spaces and Heston doing promotion and vendor care, as well as donning a number of costumes.

The Hollister FFA work tirelessly as festival volunteers beginning at 5AM.

“Cosplay [costume + play] is an emergent art form here in the Ozarks,” explains Heston. “We invite Feast of the Goblin King, Pure Wonder Idols, KAT’s Wonder Woman, and more to showcase the cosplay community.” Kirk Lewis, a medieval armorsmith, brought a number of Viking shields for display on the pedestrian mall.

At noon and 5 p.m., live steel fighting group Order of the Red Boar fought inside an arena constructed in front of Hook & Ladder Pizza. Live steel fighting is distinguished from “live action role playing” (LARPing) as real weapons and armor are used and the fights are not choreographed. “Think mixed martial arts but with armor,” explains herald Clint Unruh. The Red Boar has been a regular at StateoftheOzarks Fest since the group’s founding in 2019. “We are a brotherhood of fighters,” says captain Timothy Hamel.

Vendors at StateoftheOzarks Fest ’22 included a variety of traditional craftsmanship, fine arts, local businesses and area foods. “The vendors and demonstrators on the street reflect our member community,” explains Heston. “It’s very important to us to effectively represent the region and surprise guests at the same time.”

“StateoftheOzarks Fest ’22 was the first time I’ve shown my work publicly,” says Greg Miller. “I had the opportunity to get the feedback from thousands of strangers. The ramifications of the festival have been impactful to say the least. I have decided to make the Ozarks my permanent home [as a result]. The event was a pure success personally and professionally.”

StateoftheOzarks Fest ’23 is being planned for Saturday, September 16, 2023.