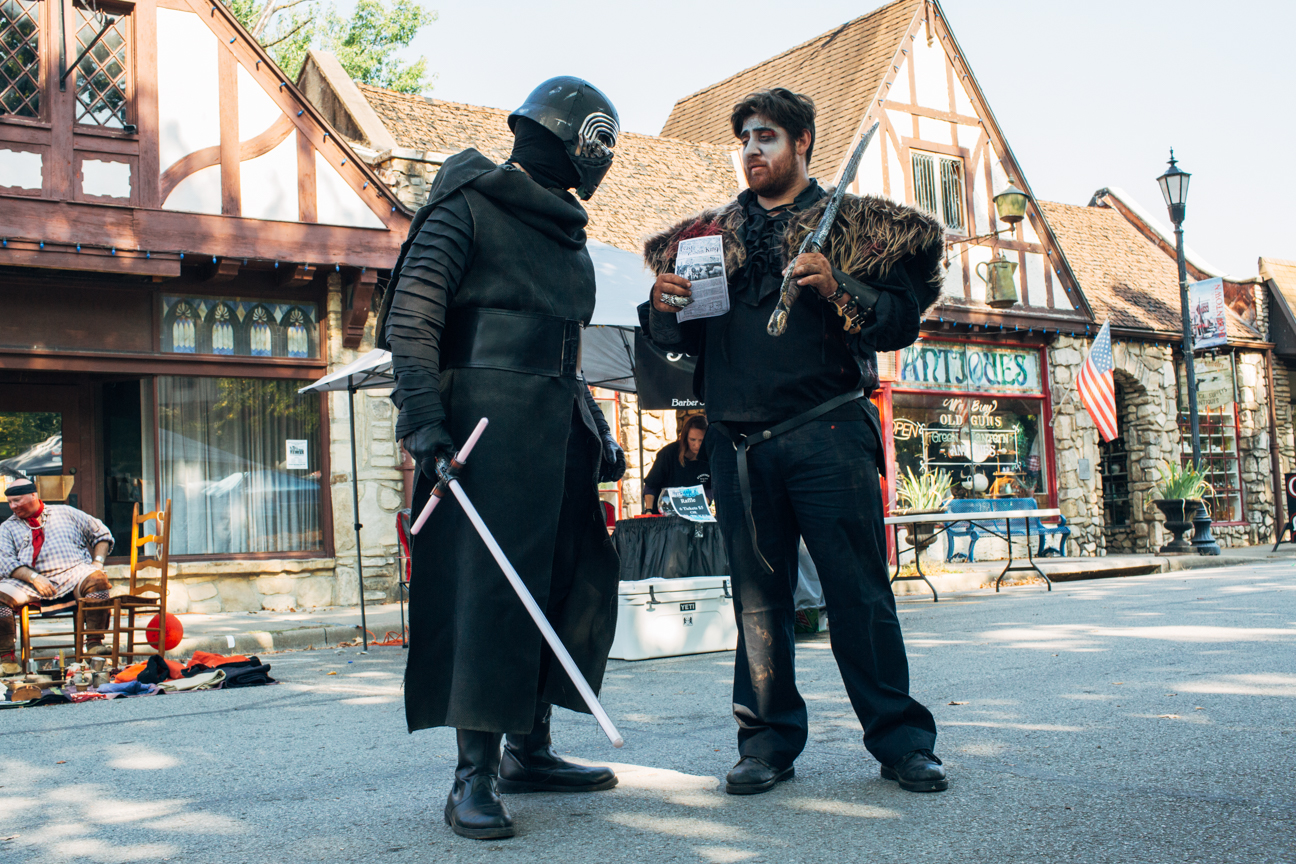 HOLLISTER, MO — “You’re not dressed like David Bowie,” challenged the timid teenage girl standing before the big man swathed in black, bloody fur and green-and-white face paint. She then weathered the full brunt of this Ozarkian goblin king’s mock anger.

“David Bowie! He’s not the Goblin King. I am the Goblin King,” roared Clint Unruh of Willard, MO. He shouldered his sword and turned to those standing nearby to grumble, “Nobody wants to see me in tights.”

That was StateoftheOzarks Fest last September, an inaugural street festival hosted by the StateoftheOzarks.net online magazine and dedicated to celebrating the weird, wonderful and diverse element of the Ozark Mountains.

Editor-in-chief Joshua Heston explains, “Our mission statement is simple: to preserve and celebrate the Ozarks. I guide the narrative of the magazine just as I guide the narrative of the festival. We deal with history and traditional craftsmanship and our collective heritage. But celebrating the Ozarks gives us a lot of freedom. We specifically celebrate elements of today’s Ozarks that are culturally significant, whether that be cosplay [costumed play] or progressive fine arts or minority rights issues. Some people call it a delicate balance. Some question whether we can all ‘get along,’ but for us, it’s just called another day at the office.”

A number of festival attendees appeared initially surprised by the cultural mix presented in a small Ozark town last year. Hollister, located across Lake Taneycomo from Branson, Missouri, has a population just barely over 2,000. “You all at StateoftheOzarks really know how to let your freak flag fly,” shared Jane Ewing, owner of Number 10 Downing Salon. Hollister Police Department estimated the day crowd at over 5,000.

SOTO Fest ’18 is scheduled for 10AM to 6PM, Saturday, September 15. The festival will again span the town’s historic Downing Street.

Ghost Busters of the Ozarks, Feast of the Goblin King, VisionCon and Caleb Scott’s strongmen will return.

“It’s an unlikely melting pot,” shares Scott, who will be lifting hundreds of pounds of iron and stone on the street that day. “The festival gives you an opportunity to leave the modern, hectic everyday and step into a world of wonder and craftsmanship.”

“The festival makes you feel comfortable and welcome to share what you’ve made,” says 17-year old Branson artist Kaitlynn Robinson.

“Everyone from different backgrounds coming together with one thing in common: we all love the Ozarks,” furthers history author Clint Lacy of Marble Hill, Missouri.

Travis Archie of Campbell’s Company Camp #2252, Sons of Confederate Veterans, concurs. “We are honored to be invited to SOTO Fest and really hope to foster open, honest conversations about our history and the activities the camp does to preserve Confederate history of the Missouri Ozarks.”

“It’s where superheroes and Civil War re-enactors mingle, while weightlifters demonstrate next to arrowhead makers,” says Curtis Copeland, founder of the Society of Ozarkian Hillcrofters and longtime local historian. “It’s that rustic spirit of the traditional autumn Ozarks festival that [also] introduces the visitor to a feast of activities.”

“SOTO Fest is representative of the creativity, individuality and traditions of our region. It brings together unique artisans of all disciplines while also fostering connections that highlight the profound impact the arts can have on the health and wellness of the community. It’s also a ton of fun,” shares Tenille Blair-Neff, art therapist and executive director of SMAC.

“It’s amazing event that has not only brought Hollister together but the whole Ozarkian community,” noted Clint “Goblin King” Unruh recently. “I have never been a part of something as massive and as welcoming as SOTO Fest is.”

The Treehouse by Chris Whitley (art by Shelly Maledy-Martin)
August 2, 2018