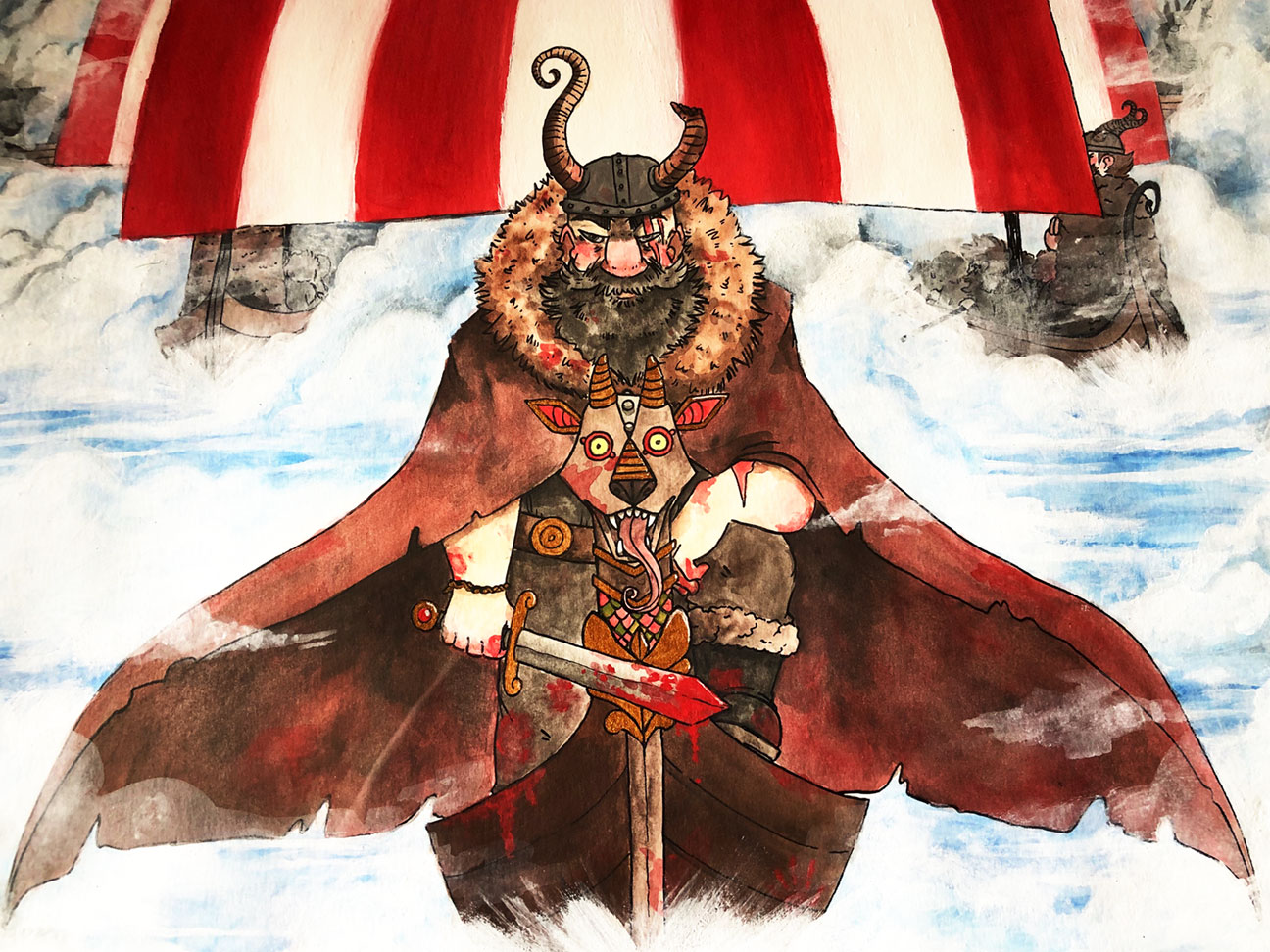 Mirroring his mood, the gorgeous blue sky faded to sullen gray as Leofstan trekked eastward toward Bristol.  What he failed to notice… the other seamen quickly saw.  The air filled the sail with a doleful omen from the sea, uncharacteristic of bright spring weather. The misty, murky gloom pursued them until evening and then greeted them the next morning when they awoke.  The dim haze of the Stygian realm welded the lifeless sky’s reflection to the top of the steely sea, binding them as one.  And together the two softly muttered Leofstan’s name with the dead lap of waves ominously slapping the soggy planks of the boat’s hull.

Faintly, on the fourth slow day, a strange noise was born above the water from some direction beyond sight.  Invisible, no one knew the origin, but a cadence remained… like a soft muffled pulse, the twilight whisper of powerful wings, or the stroke of hundreds of oars thrusting the ocean behind them.

As Leofstan’s cumbersome ship crept into the Bristol Channel from the Celtic Sea, a watch was set to search for the source of the approaching sound.  The regular beat grew louder, joined with the low thud of drums, marking the rhythm of the stroke.

The sailors aboard the merchant ship suddenly understood their plight.  From their childhood, the Wessex men remembered horrible stories about the raid on Portland Island in 789 or the attack on Lindisfarne near the coast of Northumbria in 793.  More recently, the Anglians heard rumors of the Franks being attacked near the mouth of the River Seine.  Several aboard the ship had sailed past the shoreline of Kent the previous year and seen the raging fires on Sheppey Island.  Explanation was not needed.  They already knew what lurked in the haze.   But maybe, if they were extremely lucky… the misty gloom would work in their favor, hiding them from the threat.

Truly, those were Leofstan’s exact orders, “Keep it steady boys.  Keep it still.”   To the best of their ability, they fully intended to comply… if only the wind cooperated, but it didn’t.

Quite without warning, a land breeze suddenly freshened, and above their heads the first hint of sun weakly shined through the milky veil.  Since the threat was behind them, Leofstan’s boat was on the leading edge of the clearing and would quickly be spotted.  Depending solely on the wind, their speed was set.  They could not outrun the oarsmen!  There was absolutely no way to reach the Avon’s mouth or Bristol.  And even if they did, the tides were against them for navigating the river.  The only hope was to beach the boat, abandon the cargo for loot, and try to escape inland ahead of the pagan mob.  Chances were slim, but that was the risk Leofstan and his men would take.

Running into open air, a sighting was hastily made, and the consensus was Carhampton.  Pulling hard against the quarter rudders, the freighter’s bow smoothly turned to starboard.  Seconds later, the shoreline of Somerset stretched before them.  If only they could cross the intervening water ahead of their pursuers!

Standing on the aftercastle, Leofstan glanced over his shoulder to see a sleek single-masted ship effortlessly glide from the soupy mist.  Above her deck, a giant red and white sail billowed in the wind.  A horn sounded on the phantom boat and was instantly echoed by countless unseen ships traveling in her wake.  In response to the signal, the drum beats immediately called for the oarsmen to quicken their pace because the hunt was on.  One by one, members of the ghostly fleet appeared.  Three, four, five… ten, fifteen… twenty, thirty, thirty-five elegant raiders broke from the fog bank before Leofstan stopped counting.  Like wraiths from the netherworld… the dragon-headed boats edged closer in fast pursuit.  Turning to his desperate men, he called for archers to join him on the battlements.  Then pointing ahead, the ship master riveted his attention on the coast of Anglia, the object of their only hope.

Like a pack of wolves, the marauders quickly mastered the chase.  Watching the prey dash for the coastline, three of the Viking longboats broke formation to intercept the game.  Long before the Anglian ship ever had a chance to run aground, she was cut off from her escape route.

Making a good attempt to defend themselves from both the forecastle and stern, Leofstan’s archers were simply outnumbered.  Hope died as the raiders flung hooks into the rigging and on the deck.  Holding shields while brandishing their swords, the Vikings boarded the defenseless vessel.  The Saxon’s who surrendered were collared as slaves.  Those who fought were brutally killed.  Defiant to the end, Leofstan was among the latter.  Driven to the deck, the man was stripped to the skin.  Then binding his ankles with a length of rope, he was hoisted in the air from the spar.  Suspended between heaven and hell, the captain helplessly hung like a pig to be butchered… and butchered he was.  Cleaving his ribs from behind, Leofstan’s lungs were pulled out of his back while the man still breathed.  Then letting him slowly bleed on the planks, his ship was cleanly looted before being torched.

Editor’s note: This piece, written by Edwin Woolsey, was presented at the StateoftheOzarks Writers & Artists Night on June 25, 2018. His work inspired the art of Kaitlynn Robinson.