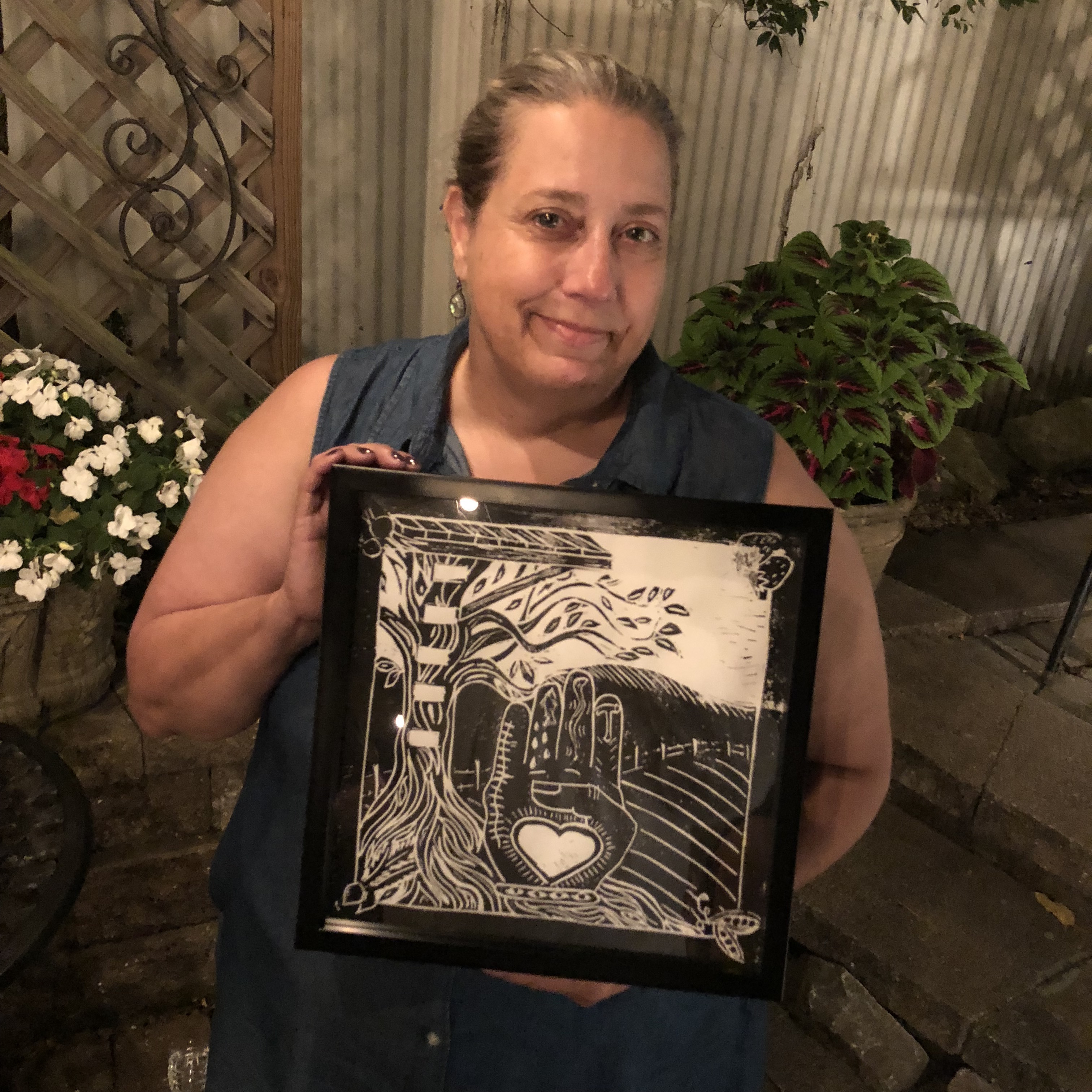 Story by Chris Whitley. Artwork by Shelly Maledy-Martin (pictured above)

This is a story about a tree house, a scar, and the loyalty of brothers. Growing up, I was fortunate to have three big brothers looking after me. Seven, nine, and ten years older than me, to this day they often talk of how I was several years old before they realized I was an actual little person, and not a toy that Mom and Dad had given them to play with.

This explains a lot of the crash test dummy activity that I was exposed to as a youngster, like the time I was boosted onto the roof of Dad’s workshop and was given a fitted bedsheet and was told to grab it by the corners, run real fast, and jump off the edge of the roof, so that it would serve as a parachute and I would land softly, “just like Rocky the Flying Squirrel.” As it happened, I landed like a bag of hammers.

That wasn’t the first time I heard Mom say to them, “You’re supposed to LOVE your little brother.” And it would not be the last.

There was that one day when I was not quite five years old, and they helped me climb the ladder into our treehouse. This was not your garden variety kids’ treehouse, although it did overlook our family’s vegetable garden. It was nailed into the branches and trunk of a massive, burly, black walnut tree that reached 50 feet into the sky. Because Dad was a home builder, my brothers had incredible scrap lumber resources from which to build this treehouse. It had three levels, including a balcony that afforded us a view all the way over the roof of our house, the neighbors’ privacy hedge, across the fields of our farm, seemingly for miles in every direction. Equal parts fortress and funhouse, it had windows and peepholes, and a trap door through which we could raise and lower supplies at the end of a rope. Miraculously, none of us managed to hang ourselves from the rope. And as far as I know, only one of us survived a fall from the bottom floor.

What I know is this: At some point that day, my brothers decided to launch me out the door of the treehouse. Maybe it was to see if their toy could fly. Maybe they just decided I was being too annoying and needed to go back to the house. We may never know.

I’m just thankful that some 15 feet below the treehouse was a barbed wire fence that caught my body as it hurtled to the ground. Without that nice springy fence, I could’ve died of a broken neck.

Unfortunately, as I landed one of the barbs on the fence ripped a huge gash in the palm of my left hand, running from the base of my palm and about a third of the way up the underside  of my little finger. At first I found the wound to be fascinating, because it showed what my insides looked like in a way I’d only seen before in World Book Encyclopedia illustrations of human anatomy. Yes, fascinating. Until I noticed the bleeding, and the sting of air against my inner dermis. And then I started screaming.

Mom and Dad arrived quickly on the scene. After preliminary investigation, interrogation and consolation, they wrapped my hand in a kitchen towel and drove me to the hospital, where Doc Gillespie seemed to be as fascinated with my wound as I was.

“How far did you fall from that treehouse?” he asked.

“Pretty much all the way,” I deadpanned, as he stitched me back together.

Remarkably, more than a half century later, my hand still bears the scar, which has grown right along with my less visible scars. Just as remarkably, although Mom and Dad are gone and there’s no authority left to threaten my three brothers with punishment, to this very day they continue to keep their story straight: We never pushed or threw him. He slipped and fell. Yeah, that’s the ticket.

Perhaps most remarkably, I still forgive my three greatest living heroes for being such magnificent, consistent, longtime liars. Call me a crash test dummy for saying it, but you’ve got to love the loyalty of their brotherhood. Pretty much all the way.