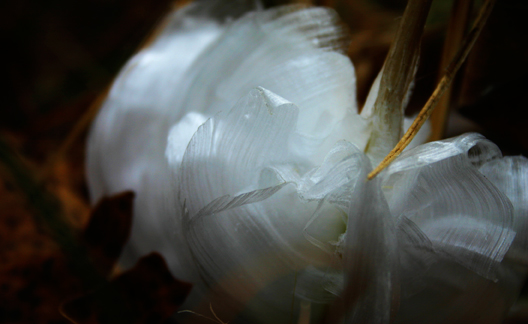 If you find yourself traipsing about an Ozark hillside sometime this winter, it might be a good idea to watch where you’re going. 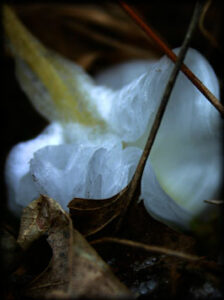 Otherwise, you may put your foot down on an ice rose.

They form at certain altitudes and only under specific weather conditions. Ice roses appear to be unique to the Ozarks.

When the air temperature is below freezing but the ground still warm, water vapor can be drawn up from the soil — usually through dead weed stalks.

As the water vapor pours out from the stalk, it freezes in strands. 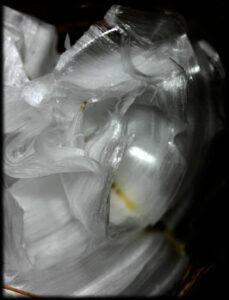 Ice formations that course and swirl, mapping out the flow of the air itself.

Layer after layer of ice is laid down like spun glass.

Ice roses take on a variety of shapes, growing to resemble not only roses but iris, tulips, leaves, even fancy ribbon candy.

Some exceed four inches in width.

And, though ice roses are rare, once conditions are right, whole mountainsides can bloom with roses in an afternoon.

So, the next time you’re traipsing about an Ozark hillside in the winter, keep an eye out for anything white.

And watch where you put your feet.

Years afterwards, I still remember the “ice rose afternoon” so very clearly. Gadding about on a cold, overcast day in Mincy, we were actually looking for sarvisberry to photograph for State of the Ozarks. On a mountainside, in my peripheral vision, I saw what I thought was a plastic sack. 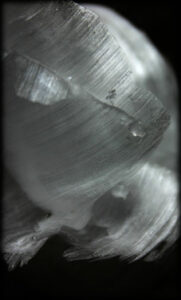 “Careless of people to be let their junk blow off,” I thought to myself as I stomped through tall, brown grass to a young sarvisberry laden with red berries. And then I looked down.

Right at my feet was my first ice rose (or frost flower). I was absolutely astonished. And then, upon looking over the hillside, it was obvious that ice roses were blooming everywhere. As you can see by the water droplets on some of them, time was precious. The air temperature was hovering just above freezing — and the soil was still soft. Make that… muddy.

I wallered around in the mud all that afternoon, slithering over rocks and fallen tree trunks like some sort of weird, bulky otter, Canon Rebel camera glued to my face the whole time. And you know what? It was worth it!