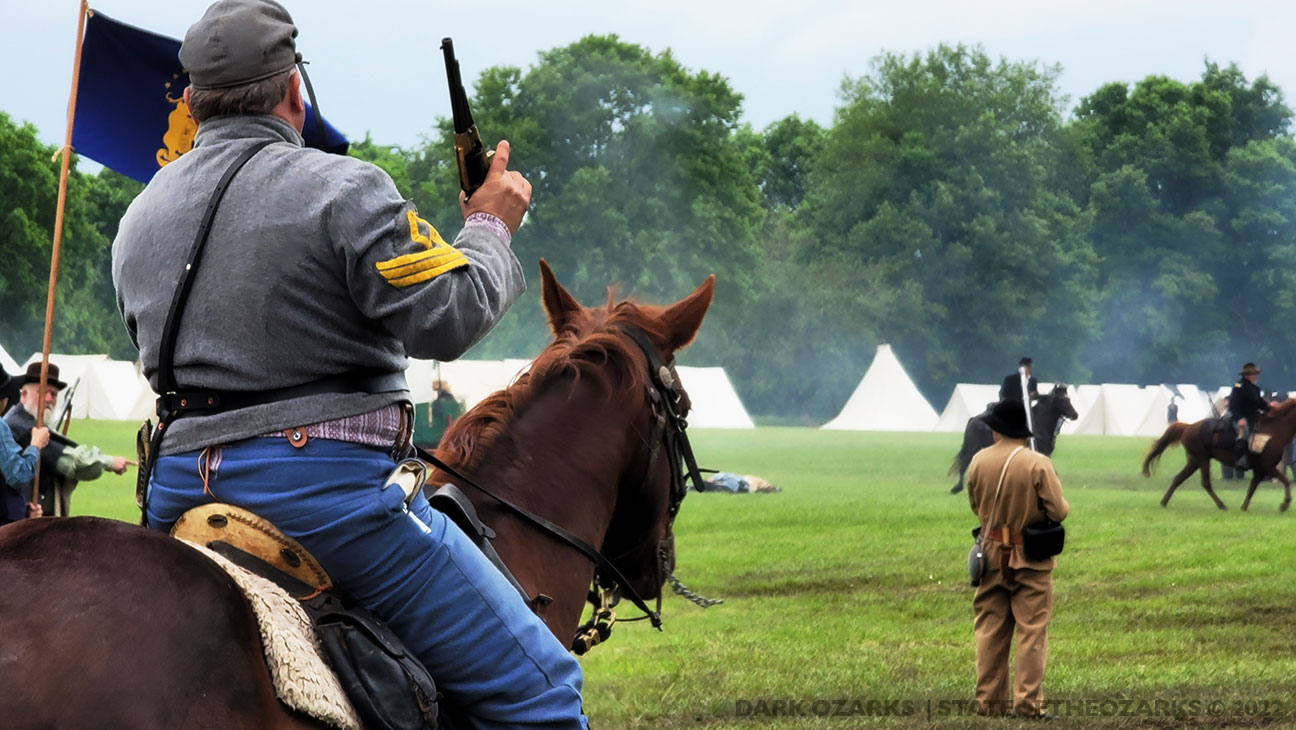 As the Battle Found Them

The low May clouds are heavy with rain. A biting blackberry winter wind whips at the tall Missouri grass and the Civil War Ranch’s parking is in danger of turning to mud. The temperature falls. A covey of girls in period dress hurry past the parked cars and trucks, lamenting the soaking mud on their lavish hoop skirts. There is a sudden crack to the south as someone test-fires a rifle. From across the nation, Civil War re-enactors converged to honor the Battle of Carthage, Missouri, this Saturday, May 21, 2022.

July 4, 1861. The young summer was hot even as night fell. It was Independence Day. Claiborne Jackson, sitting governor of Missouri, stands in his field tent in the far frontier of southwest Missouri, reading a dispatch. The governor commands an army of Missourians, a force of 6,000 men. He has been outrunning a Federal army sent to capture him. From the dispatch, the governor learns the Federals have outmaneuvered him. A well-trained Federal force is waiting to the south, blocking the Missourians from the support of the regular Confederate Army in Arkansas.

The Federals ahead are a well-trained army estimated to be 2,000 strong. The fact that 2,000 of Jackson’s 6,000 men are unarmed does not change his mind. Night birds call and bats skitter in the dark. In the early hours of July 5, Jackson gives the order:

In a few short hours, the first pitched land battle of the the United States’ Civil War will begin, a thousand miles to the west of Washington, D.C. A thousand miles to the west of the policymakers, the statesmen, the East Coast abolitionists, the warmongers, the journalists, the historians. Seventeen days in the future, Bull Run will become a name the nation will remember.

But it was here, west of the Western Theatre — on the far, ragged-edge of what would become the Trans-Mississippi, where prairie meets Ozarks — that the war became real. Perhaps it was the only way. Americans have always looked to the west.

A runner approaches, informing Sigel that Claiborne Jackson was in town yesterday and the Confederate army is now camped near Lamar, Missouri, less than 25 miles to the north.

Sigel is accustomed to leading men into battle. He’d held command in the German Revolution as one of the “Forty-eighters.” After immigrating to the United States, he served as superintendent of St. Louis Schools. Upon outbreak of war, he volunteered in the Federal Army. The colonel stops at the home of Norris Hood, former sheriff and strong Union man. Hood’s young daughters walk out to greet the troops and one of the girls lifts her skirt to reveal a hand-sewn Stars and Stripes pinned to her petticoat. Nearby men shout their approval.

The men are to leave James’ Spring, scant blocks east of the courthouse, march north, and engage the enemy.

Today, small farm houses and the occasional rural business dot the countryside. Trees are thick along creeks and in valleys. Grass grows tall along unassuming roadsides. One could drive these roads all day and remain unaware of the events which occurred here.

It is 8:30AM, July 5, 1861. About eight miles north of Carthage, Jackson’s line spreads almost a mile wide across the prairie. The Federals approach from the south, trailed by a 32-wagon supply train. To the west, the Confederate’s right flank, the horsemen, the mounted cavalry, watch their artillery line prepare to fire.

Thirty-year-old Captain J.O. Shelby surveys the southern horizon. His war horse nickers and shifts subtly against the morning flies. A Missourian, Shelby has already been at war six years. He was in Bleeding Kansas, fighting the Abolitionists. His Lexington, Missouri, sawmill burned in 1855. Arson was suspected. Shelby was left $9,000 in debt. Governor Jackson’s call for volunteers was welcome.

Shelby spots the advance troops of the Federal line and signals the attack. The first shots fired by Shelby’s unit begin the first large-scale land battle of the war. The Federal advance halts. Shelby spurs his horse, likely not knowing he is galloping into the pages of history.

Fierce artillery barrages begin across the Missouri countryside, heard up to 30 miles away. Sigel’s well-armed and disciplined troops appear to have an advantage. The Confederates send large numbers of men in flanking maneuvers. Sigel does not know many of these enemy soldiers are unarmed. There is no word on General Lyon’s whereabouts.

The cold May wind continues to blow, now spitting rain. Guests file through the barn toward the muddy field where soldiers wait and flags fly. The air smells of fried ‘taters and funnel cake. A Union soldier walks by, cell phone in hand. Artillery begin preparations. A photography drone buzzes overhead like some oversized mosquito.

“Can you get that angle?”

“Why are they over there?”

“I want funnel cake as soon as this is done.”

“Why didn’t I bring my tripod?”

“I don’t understand this battle.”

“Oh, look, the horses are coming!”

Lyon’s army has stalled, unable to cross the rain-swollen Osage River. Sigel learns no reinforcements will arrive. Shelby and his horsemen press their attack on the west while more and more Confederates flank the Federals on the east, threatening to overrun the supply train. Sigel orders the troops to withdraw and a mile-wide running battle ensues. Men rush to drag cannons south while still firing, slowing the Confederate advance.

At the Kendrick House — that solemn federal-style farmhouse still standing just north of Carthage — the men are working in the fields when gunfire erupts. They drop their tools amid the crops and flee.

Young Tom Kendrick walks out of the house, shouting to a rider coming fast.

The Union cavalryman doesn’t slow as he gallops past.

Only hours after, the Kendrick House is commandeered first as a Union, then as a Confederate, field hospital. The family’s dining room table is carried out the back door, becoming centerpiece of a field operating room. Blood pours across the oaken planks and down the table legs, warming the green Missouri grass.

The buzzing drone makes another pass overhead. The artillery open fire, unmistakable booming echoing across the fields. Explosions, small charges set near the hay bales, go off before an appreciative audience. The Confederate infantry march southward, re-creating destiny. More shots. A man screams and falls. The remaining men advance. Another wave of artillery fire. Cascades of smoke drift across the field, obscuring the men for a moment. Guests move with the action, having crossed a sudden creek bridged by plywood and an old door.

On that trembling, makeshift threshold, past and present seem to meet.

Afternoon, July 5, 1861. The Confederates reach town where the Union waits. A city park, once a cemetery, becomes ground zero for Union batteries lobbing shells into the courthouse square.

A 14-year-old soon-to-debutante comforts a fallen Confederate soldier, lying to him, holding his hand, telling him he’ll be fine as his gut-shot body bleeds out. She is a student of Carthage Academy, skilled in languages, a musician, a fine young lady with a bright young future. She is on the sidewalk of her father’s hotel, caught beneath the Union artillery bombardment. As the man in her arms dies, her sorrow turns to anger, then hate. Young Myra Belle Shirley will soon turn spy and courier, escape the Federals, and be remembered as the “Bandit Queen of the Dime Novels.” She will become infamous outlaw Belle Starr.

On the south side of the square, Mr. Robertson is selling ammunition and supplies to Carthage residents desperate to defend their homes. Artillery shells explode. Grape shot hits the roof. The walls of the mercantile splinter. Much of the town square is on fire. Robertson continues to ring up sales until a final explosion collapses the building. He dives for cover and crawls from beneath the rubble of his store.

Sigel makes his stand on the southwest side of Carthage. Darkness descends. The supply train wagons are safe on the road to Sarcoxie. Sigel orders a strategic withdrawal under the protective cover of darkness. Tomorrow, his Federal troops will march to Springfield. For the day, Governor Claiborne Jackson and the Confederates control the southwest corner of Missouri.

The day’s re-enactment battle is over and the clouds are beginning to clear in the west, cold spring sunset peeking through soft gray cloud. The Civil War Ranch’s mown lawn turns gold in the light.

Soldiers and ladies assemble on the green. The man with the black top hat begins to call the dance.

The ladies turn. In a widening circle, as the day’s light wanes, picket and colonel, Confederate and Federal, step forward, then back, then side to side.

This is a dance that’s been going on for over a century and a half. A healing that each new generation must work out for its own.

A lady in blue twirls back to a Partisan Ranger, a Confederate man. A lone black-and-white dog watches in wonder. Children play in the barnyard. A Union man laughs.

And perhaps those just beyond the fog of war and the veil of death may stand, shoulder to shoulder. Once, long-ago, they were brothers, then mortal enemies. Now, beyond the shades of sunset and night, they are brothers again. Beyond the light of the barn, the laughter, and the dance, these shadows-once-men may turn to each other and nod. And they may smile.