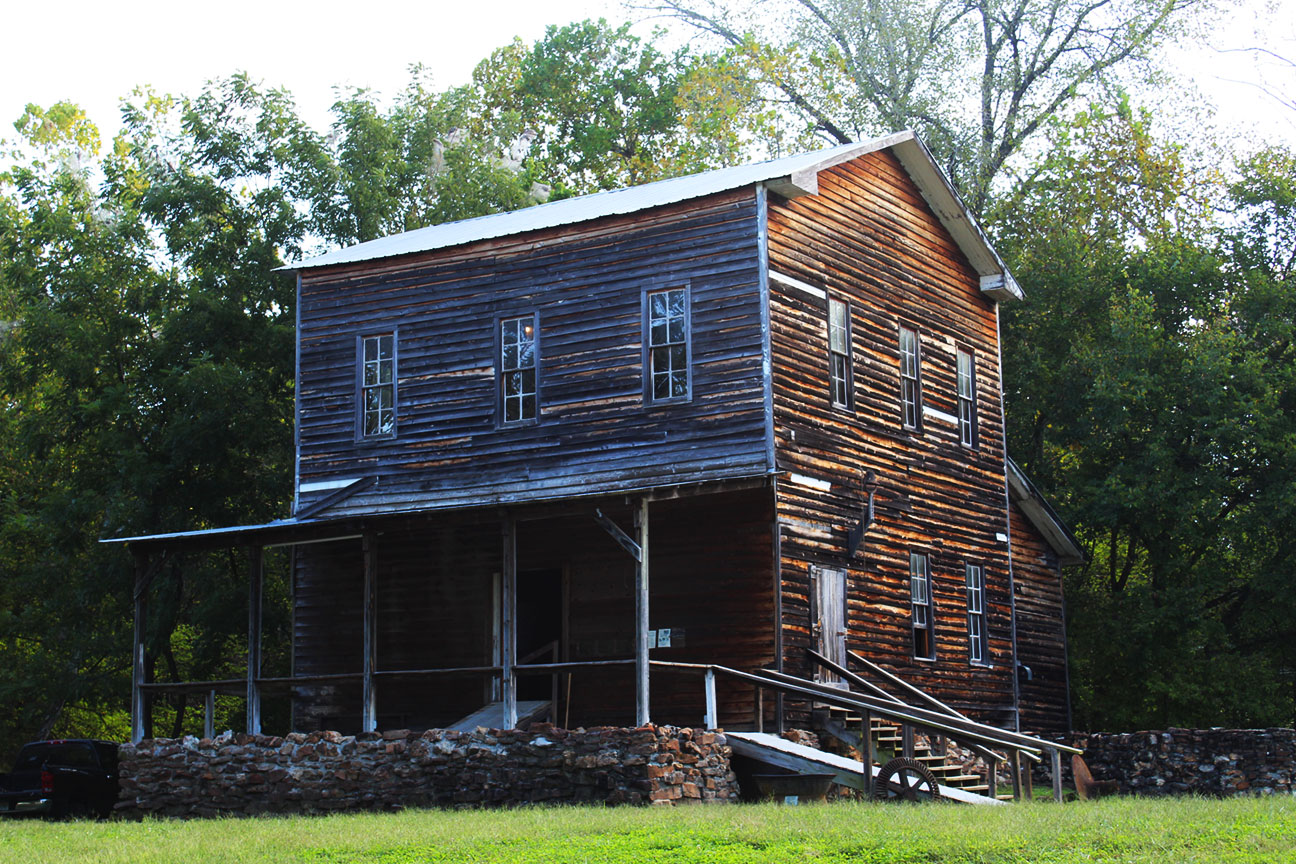 Samuel Farmer, my great-grandfather, owned the mill from 1916 to 1941, when he sold it to Frank Nixon. I was raised in Dade County, Missouri, just seven miles northeast of Greenfield. My grandfather Howard Farmer was Samuel’s son. Samuel also had a daughter, Nona (my great-aunt), and she married Paul Nixon, younger brother of Frank (who had bought the mill in ’41).

Even after my great-grandpa sold the mill to Frank, I had the privilege of seeing the mill run while it was still on its original site on the Sac River / Turnback Creek. I was about six years old then, and it was April or May of 1947. I had been born in December 1941.

My dad, John Howard Farmer, son of Howard M. Farmer, and my great-grandpa Samuel Farmer all stood on the bridge just a few yards west of where the mill once stood. The mill was located on the south bank of the river. We all watched as the big paddle wheel was turned by the river’s current.

The paddle wheel, in turn, was running the pulleys with long and wide leather belts inside the mill, grinding corn meal that day. I remember, it was on a Sunday morning, bright and sunny, quiet and beautiful.

My great-grandpa, Samuel Farmer, was a true Ozarkian. He lived in Greenfield with my great-grandma. Four years later, in 1951, he passed away. Sometime in the mid to late 1950s, they moved the mill back about three miles from its original location, to the old Pemberton place.

Raymond Keith Farmer retired from the Sekan Printing Co in Fort Scott, Kansas. He regularly travels and also helps his former boss in scale model railroading. He is a long-time StateoftheOzarks reader and may be found regularly on the airwaves (A.R.S. WBØQDE). He is pictured with “Minnie” about seven miles northeast of Greenfield and not too far from the original place on the Sac River where the Hulston Mill once stood. “They called it the Sac River Turnback at that time before the mill was moved on account of Stockton Lake. As you can tell by the picture, my wife Marsha keeps me well-fed.” November 2016

by the Dade County Historical Society

Hulston Grist Mill was established at the confluence of the Sac River and Turnback Creek in Dade County, Missouri, in 1840. Land records show that Ezekiel Madison Campbell, one of the original settlers of the southwest Missouri Ozarks, owned the mill site, and it is assumed that Campbell constructed the original mill. At this time, the Ozarks was still very much a wilderness and the grist mill served as a focal point both as economic and social functions in the society of the mid-1800s.

John K. Hulston, great-grandson of one of the early owners related in his history of the area something of a social and informational function of the mill:

Men came on horseback or horses and mules pulled wagons up to the loading dock where menfolk paused to converse.… While the grinding progressed the men talked crops, livestock, fishing, politics and weather. Finally, they lifted the bags into their wagon or buggy or lowered a bag across the back of their mount and took their leave for the journey home.

In 1848, Henry H. Pemberton bought the mill from his father-in-law Ezekiel Campbell and ran it until 1859 when it was sold to Henry Engleman. Two years later the mill was to play an important role in saving Missouri for the Union during the American Civil War.

It is not known whether the Engleman family was secessionist or Union in their political believes, though having recently arrived from Virginia, there is a possibility the mill operator may have joined those millers who refused to grind flour for the Union Army under the command of Brigadier General Nathaniel Lyon.

In any case, the Dade County Home Guard was called upon to furnish flour for Lyon’s army which found itself 125 miles from the supply terminal encamped in Springfield, Missouri. Without food supplies from Hulston Mill and other area grist mills, Lyon’s army might have been forced to retreat northward to the established supply lines; instead, Union troops engaged the Confederates at Wilson’s Creek on August 10, 1861, and claimed victory to the second battle of the Civil War.

Engleman operated the mill for another 10 years following the Civil war and then sold it to James Christopher Hulston in 1875. Shortly thereafter an assortment of other economic enterprises — a post office, general store, drug store, hotel, livery stable, blacksmith’s shop and in more recent years a tomato cannery — were established and recognized by the postal guide as Hulston, Missouri.

The mill was modernized by John Christopher Hulston, son of “Chris” Hulston, in 1892, and was convered to a full roller mill with an auxiliary steam engine to provide power in times of drought.

The operational history of Hulston Mill, spanning 127 years, came to an end in 1967 as the result of the construction of a multi-purpose reservoir project on the Sac River. One of the very few grist mills of its type still in operating condition in southwest Missouri became subject to inundation by the waters of Stockton Lake. A symbol of the sturdy pioneer era, Hulston Mill ground its last flour on June 25, 1967.

Efforts to save this landmark from destruction were sponsored by the County Court, Historical Society, the Park Board, and the citizens and media of Dade County. Through their efforts the mill was moved to a 50-acre tract one mile to the southeast of the original site in order to become a focal point for a heritage park featuring the reconstructed Hulston Mill, circa 1850.