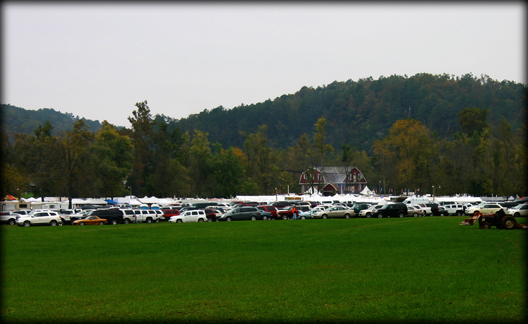 by Joshua Heston and Dale Grubaugh

It all started with a heavy rain. The clouds rolled over the Ozark hills along with unseasonably cold temperatures. 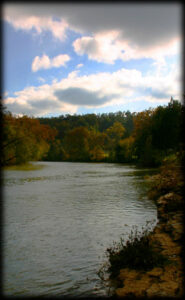 Downpours hit the high country of the Boston Mountains — the headwaters of the White River, the Kings River, and the War Eagle. 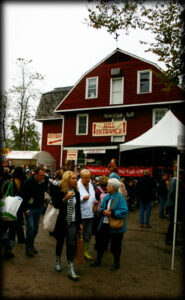 The War Eagle River (Plate 2) crested near the venerable mill on Friday — 20 feet beyond its banks. The sprawling pastureland of the celebrated War Eagle Craft Fair was under three feet of water. Arkansas news crews came and reported the ravages of weather. And then they went away. The flood waters did the same. And that Saturday morning, the hardworking folks of War Eagle were back at the mill, getting ready for the fair.

If there’s one thing folks in the hills have learned, it’s that it takes a lot to put a stop to the “Granddaddy of all Ozarks Crafts Fairs” — clearly, a lot more than a wayward river or a lot of mud. There are craftsman and get-togethers and crafts fairs. And then there’s War Eagle. 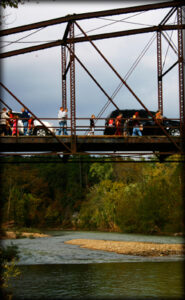 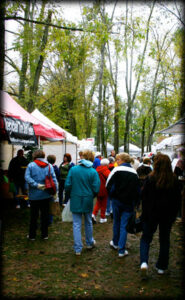 Having grown since Blanche Hanks Elliott started it in 1954, the event is an Ozark phenomenon.

The fair started across the river from the site of the burned-down mill — across the now-centennial bridge (Plate 4). The mill was rebuilt. The millyard became a second fair; host this year to celebrated craftsman Peter Engler, the Ozark Folk Center of Mountain View, Arkansas, and many others. Bill and Lucy Sharp lived atop the hill overlooking the newly rebuilt mill. Lucy was the last postmistress of War Eagle, Arkansas. The War Eagle Store, now over 100 years old, still stands halfway up the hill (Plate 7). Early in the ’70s, Bill and Lucy began the third fair — the Sharp Show. All three fairs combine to make the War Eagle phenomenon. 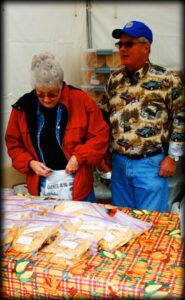 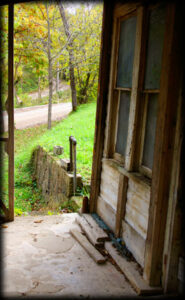 There’s the sheer size. Tents and crafts and cars and people are stretched for just about as far as you can see. There’s the quality of craftsmen and artists. Cinda Serafin, a truly gifted watercolor painter of Royal, Arkansas, was there; as was Tracy Adams, an exceptional Branson potter with a knack for combining beauty, functionality and a low price. There’s the food. Biscuits, cinnamon rolls, cornbread and cobbler are baked and sliced and served by the kitchen-load up on the third floor of the old mill. And there’s a sense of generations past — and of our heritage slowly slipping away.

Norman Hamby, the 44-year pastor of the Rogers’ First United Pentecostal Church, was there with wife Judy. They’ve been cooking up batches of peanut brittle for War Eagle since the Mill’s fair first began (Plate 6). John and Anne Lee Hampton (Plate 8), whose shop is still down in Pelsor, Arkansas, on Highway 7, make white oak baskets from scratch. “If it’s not handmade, then we don’t sell it” is their way of life. And lastly, there’s the people. 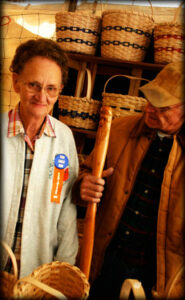 People willing to wait in stop-and-go traffic down four miles of winding two-lane road to the mill.

People who come by the tens of thousands, generation after generation — bringing kids and grand kids and organizing makeshift reunions — all under the old river trees while the mill wheel keeps on running. People who are willing to share their heart and soul through their trade — from baskets to blown glass to cornbread to candy.

No, even the old river has a hard time stopping the War Eagle Fair. Ya’ll be there next year.