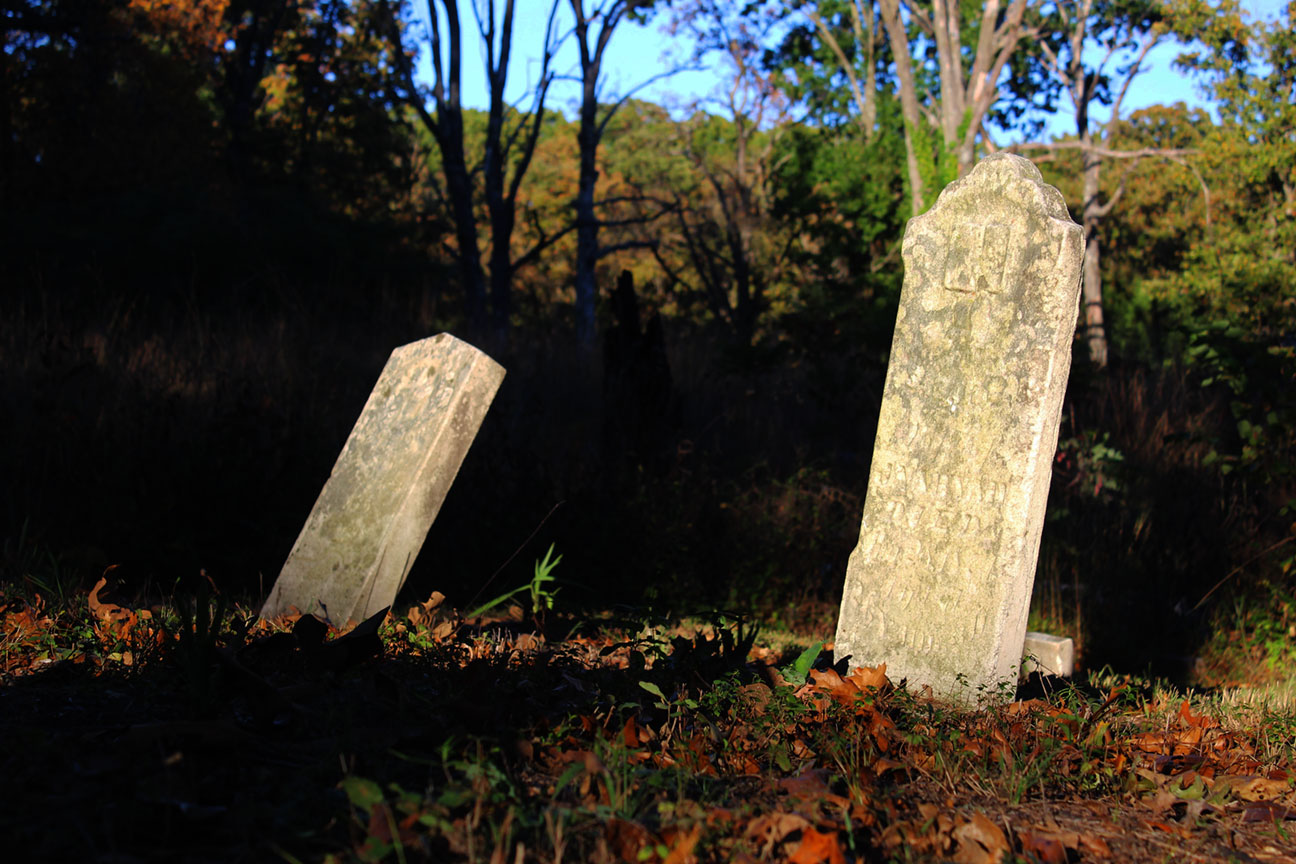 The road winds north of Joplin, across the creek and up the hill. To the right, Peace Church Cemetery spreads into the little valley, shaded here and there by imposing oaks. Always-green spider grass is bright in the afternoon sun. Yucca abounds and, despite the hard work of preservation volunteers, swaths of the area’s oldest cemetery have been reclaimed by tenacious prairie grass. It is a peaceful place in the late-October afternoon but there yet remains a sense of secrets best-kept hidden.

“It’s not uncommon for people driving into the cemetery at night to see what looks like a shadow man standing against one of the trees along the drive,” shares Lisa Martin, long-time attorney and team leader of the Paranormal Research Lab, Carthage.

“There are people who have a very foreboding feeling while in the cemetery, like they are being watched. Some feel as though they are in danger. There are times people will hear footsteps or laughter. There are unexplained floating lights. I’ve seen them before. They are a kind of bluish-white light similar in some ways to the [Joplin] Spook Light.”

The Paranormal Science Lab focuses heavily on empirical research and also works to bring awareness to historical preservation. “We all tend to be history buffs,” continues Martin, “and do what we can to support historic sites. Skeptics are important [in our work]. Our perspective is if you have something out-of-the-ordinary occurring, we ask, ‘What are the possibilities?’” Here on the threshold of Ozark mountain and sweeping Kansas prairie, the region is renown for strange and brutal happenings.

During the Civil War, soldiers of the First and Second Volunteer Kansas Units — mostly escaped slaves from southwest Missouri — pushed into these hills. A “foraging party” they were called and their mission was to take livestock and foodstuffs from the farms as well as draw out Confederate guerrillas believed to be in hiding. Nearby Sherwood was a Confederate stronghold.

The Confederate First Indian Brigade — also known as the Bloody Spikes — massacred the black troops at the Rader Farm, nearly within rock-throwing distance of the cemetery. Surviving Union soldiers made their way back to Baxter Springs, Kansas, where their commanding officer, Major Williams, marched his troops through the night. The bodies of the Union soldiers, some of which had been mutilated, were piled in the farmhouse and set ablaze as Mrs. Rader and her children watched. Every structure within five miles — including the town of Sherwood — was burned. It is believed the soldiers’ charred remains are buried in an unmarked grave at the Peace Church Cemetery.

For nearly a hundred years, the Joplin area was the largest lead and zinc mining region in the world. “Joplin was established in 1872 and had a raucous reputation in the early years,” shares Larry Wood, regional historian and author. “Lots of saloons, drinking and gambling. The town really maintained that reputation through the gangster era of the ‘20s and ‘30s. Joplin was notorious as a hideout spot. Bonnie and Clyde had their big shootout here. The Barker Gang was here.”

In time, the mines would close. Reclamation projects smoothed over the mine tailings. Churches replaced saloons. But not before Peace Cemetery’s most infamous denizen would blaze a criminal trail across America, leaving at least six dead and capturing the nation’s imagination.

Billy Cook began his short, tragic life in the Joplin slum area of Chitwood on December 23, 1928. He was the fifth of eight children. His father Will Cook was a sharecropper. His mother Laura Stevens grew up on an Oklahoma cotton farm. Will Cook went to work pushing wheelbarrows of slag for the Joplin mines not long after World War I. “Billy was basically deserted, abandoned,” notes Wood. “His mother died when he was five and his father didn’t have the inclination or the means to care for him.”

“Later in prison,” adds Martin, “a psychiatrist concluded he believed Billy likely witnessed his father murdering his mother. [Will Cook] left all the children in an abandoned mine shaft.”

The fronds of the yucca lily (Yucca gloriosa), a North American native, stay green all year. The lilies’ seed pods, high atop tall dead stalks, are another matter entirely and present a haunting image.

Open gates in a portion of Peace Cemetery still under reclamation. Hardworking volunteers have done much to restore the cemetery to its original state.

A  beautiful dove graces the grave of a child. For most, the oldest cemetery in the Joplin area is an untroubled, peaceful place.

A lonely stone in the northeastern corner of Peace Cemetery, recently reclaimed from prairie grass.

Bright afternoon sun illuminates the southern portion of the cemetery.

“And this way runs the trail that lies along the higher, sunlit hills where those who journey see afar and the light lingers even when the day is done.”

“None of the families who took the children wanted Billy. His one eye would never close even when he was asleep,” furthers Martin. “He ended up with a foster mother he claimed molested him.” In 1941, Billy Cook was sent to the Missouri State Training School for Boys in Boonville. According to state record, he chose reform school over returning to his foster parent. In September 1943, he was arrested in Joplin for assault and sentenced to five years, again in Boonville. At only 18, he was prosecuted for an attempted escape. After sawing through the iron bars of his dorm, he was then sentenced to the State Penitentiary in Jefferson City.

On his release from the state pen, Cook went back to his father’s shack in Chitwood — swearing no man would arrest him again — and then to Blythe, California, where he got a $45-a-week job washing dishes. After failing in an attempt to buy a woman in Mexico, he hitchhiked toward Joplin. On December 30, 1950, he hijacked a car from an L. B. Archer in Luther, Oklahoma.

Shortly afterwards, he flagged down a car on Route 66 and, brandishing a gun, forced the passengers to give him a ride. He had hijacked Carl and Thelma Mosser and their three children, Ronald Dean (7), Gary Carl (5), and Pamela Sue (3), on their way to Albuquerque, New Mexico, from Atwood, Illinois. It was December 31, 1950. Billy Cook later described a dizzying journey across the country. He claimed he forced the Mossers to drive him to Oklahoma City; Wichita Falls, Texas; Carlsbad, New Mexico; El Paso, Texas; Houston; and Winthrop, Arkansas, all the while threatening to kill them.

Returning to the edge of Joplin in the early morning hours of January 2, they stopped at the corner of Thirteenth and Maiden Lane, according to Jim Hounschell’s Lawmen and Outlaws: 116 Years in Joplin’s History (1989). A police car approached, throwing their lights on the remotely parked car. “When we saw children in it, we didn’t suspect anything and drove on,” said Officer Floyd Cline later.

Wood continues the story, “The mother and the little kids were real panicky and they thought they were going to get rescued. But when the police left they started crying. That’s when Billy just started shooting them.”

Cook drove the bodies to the open but abandoned shafts of the Nortonia Mine northwest of West Fourth and Oliver Avenue. The Mosser family was thrown down the narrow rock well and Cook headed west, abandoning the blood-filled car in Tulsa. The family’s bodies would not be found for 13 days.

In the meantime, Cook got back to California. On January 6 he kidnapped Riverside County Deputy Sheriff Homer Waldrip, stealing Waldrip’s patrol car but leaving the officer tied up in the desert near Ogilby. Using the patrol car’s lights, Cook pulled over Seattle oil salesman, Robert Dewey, killing him, and taking his maroon sedan. On January 7, Cook kidnapped two prospectors — James Burke and Forrest Damron — and forced them to drive him to Tijuana and then Santa Rosalia. On January 15, Cook was arrested without incident by Tijuana Police Chief Francisco Kraus Morales.

Billy Cook was deported into FBI custody the same day the Mosser family’s water-soaked bodies were pulled from the earth among the Joplin mines.

Cook was sentenced to 300 years in Oklahoma City for the kidnapping of the Mossers, then transported to California for sentencing in the murder of Robert Dewey. Found guilty, he was executed in San Quentin Penitentiary on December 12, 1952.

Here the story takes a bizarre twist. A funeral director in Oklahoma secured possession of the body and placed it on display, charging Route 66 travelers a nickel each to view the corpse of a bona fide murderer. One of Cook’s sisters would enlist the services of a Joplin attorney to take rightful possession and Billy Cook — the “Hitchhiking Killer” whose story captivated a nation — was finally laid to rest in the Peace Cemetery under the cover of darkness in an unmarked grave.

In the late afternoon sun, an oak leaf drifts lazily to the ground. In the distance, gun shots. But it is just somebody sighting in their hunting rifle. Is this beautiful corner of the Ozarks haunted? It is impossible to tell.