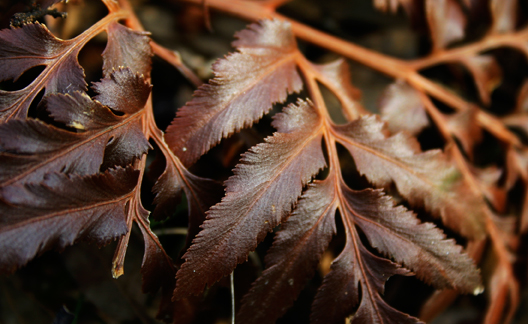 If you search the internet carefully, you’ll learn the truth. Truth that red ferns exist only the realm of cryptobotany. 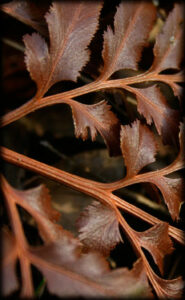 What does that mean? It means the red fern is a figment. Made-up. A bit of literary imagining. A myth.

That’s if you search the internet carefully.

But if you are willing to actually get out and be a part of the world we tell ourselves we study, you just might find something amazing.

Is the plant on this page a “true” fern? Perhaps not. But it’s frilly and fern-like. It’s color is unmistakable, if muted by the February chill.

To native Ozarkers, it is nothing more and nothing less than a red fern.

Where the Red Fern Grows is a mighty popular book. So much so, our Red Fern page is one of the most popular on Google searches. When this page was created back in 2009, all the information our great world wide web could churn out was surprisingly scarce and yet highly opinionated:

Red ferns do not exist.

But I like magic and myth and folklore and I really like it when photography backs me up. On a mossy lump of dirt at the base of Turner Spring’s branch, just before it empties into the river, we found the plant pictured here on this page.

It’s red. And it surely looks like a fern.

Quite some time later, I stumbled across Scott Ranger’s Nature Notes, specifically on his December 3, 2011 photo journal of Chattahoochee River National Recreation Area. And there, seven pages down, was my red fern from the Ozarks!

It is, in fact, (Sceptridium biternatum), or Southern Grapefern. Ranger notes, ““Sterile blade mostly 2-pinnate, the segments sharply serrulate’ of the two grapeferns that turn bronze in the late fall for the winter. I presume the bronzing is a sort of sunscreen to protect the inner tissue of the blade from sun damage during its life when the canopy is open and the sun’s rays hit the forest floor.” — ScottRanger.com

There are several things I love about this discovery. First, just because a source says hillbillies don’t know what they are talking about doesn’t mean we have to believe them!

Second, empirical evidence is what we can observe with our own two eyes — even better when it’s photographed. Particularly wonderful when it contradicts dry know-it-all sources.

Third, Latin name or not, there is magic in the natural world. The forest floor is an enchanted place where, all scientific evidence aside, a spiritual poetry exists to call us to greater places.

IN 1961, WILSON RAWLS WOULD WRITE A BOOK ABOUT A BOY, HIS COONHOUNDS AND THE OZARK HILLS.

GENERATIONS OF SCHOOL CHILDREN WOULD BE TOUCHED BY HIS WORK. INCLUDED HERE IS A SHORT EXCERPT AS IT INCLUDES THE OLD RED FERN LEGEND:

“Papa, would you mind waiting a few minutes?” I asked. “I’d like to say good-bye to my dogs.”

“Sure,” he said smiling. “We have plenty of time. Go right ahead.”

Nearing the graves, I saw something different.

It looked like a wild bush had grown up and practically covered the two little mounds.It made me angry to think that an old bush would dare grow so close to the graves.

I took out my knife, intending to cut it down.

When I walked up close enough to see what it was, I sucked in a mouthful of air and stopped. I couldn’t believe what I was seeing.

There between the graves, a beautiful red fern had sprung up from the rich mountain soil. It was fully two feet tall and its long red leaves had reached out in rainbow arches curved over the graves of my dogs.

I had heard the old Indian legend about the red fern.

How a little Indian boy and girl were lost in a blizzard and had frozen to death.

In the spring, when they were found, a beautiful red fern had grown up between their two bodies.

The story went on to say that only an angel could plant the seeds of a red fern, and that they never died; where one grew, that spot was sacred.