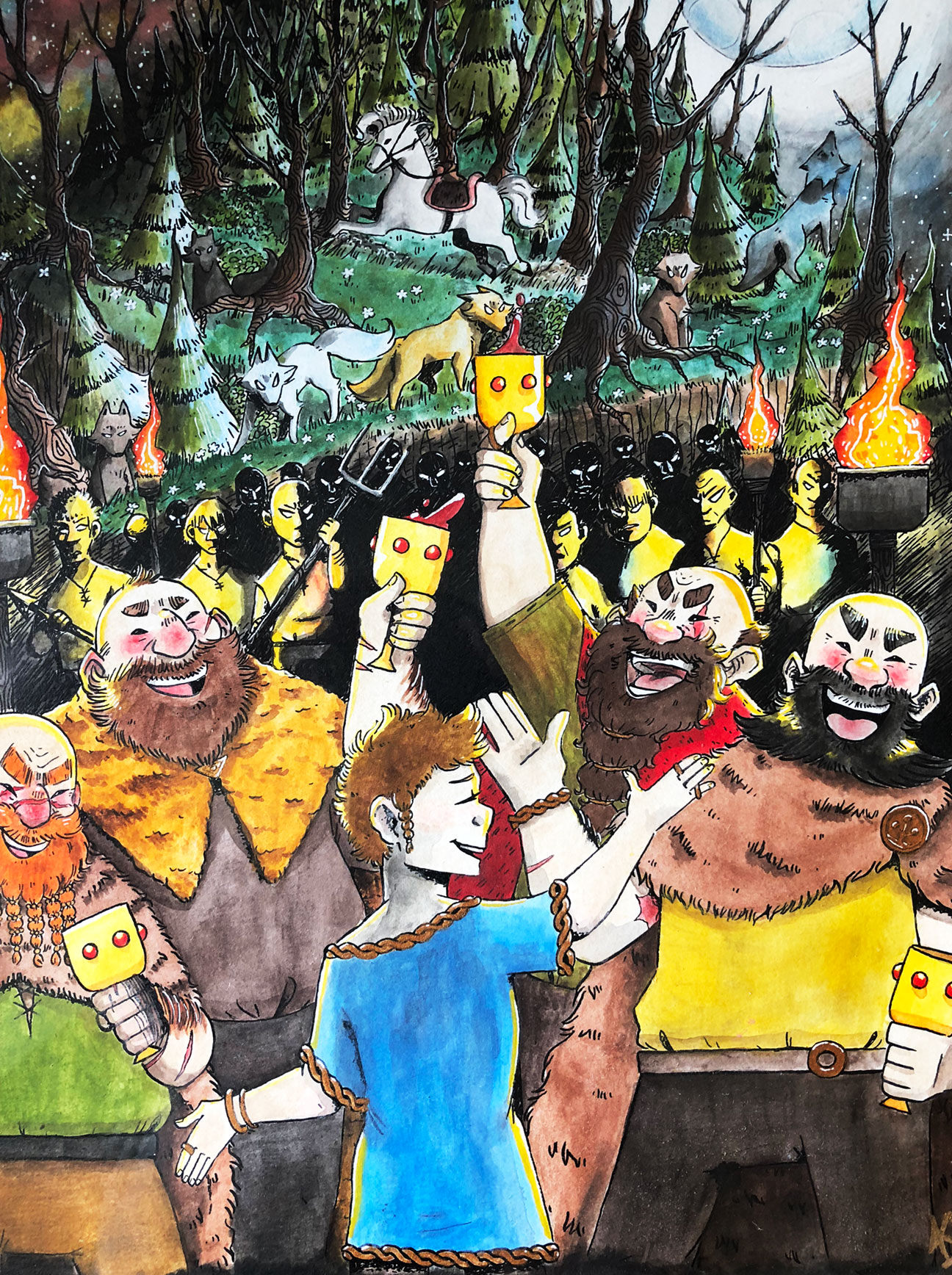 The young prince was missing late in the afternoon, secretly playing the part of a minstrel for the unsuspecting Danes at Uffington Castle. Alfred sang like a bird for his enemy’s enjoyment, determined to learn their battle plans. None the wiser, the Vikings sang back, carelessly disclosing everything he wanted to know. As soon as the music died, the lad stealthily returned to Berkshire… before disappearing again.

A bloody sun ominously sank on the western fringe that dismal Wednesday evening, January 7, 871. Driven by a desperate mission, the rider bounded to the back of his horse. The favorite white mare lurched beneath the boy’s sudden weight but remained ready for her master’s command.

Alfred glanced back before quickly applying his spurs, “Tell my brother the king that I have ridden to Blowingstone Hill to re-assemble his army.”

Slapping the reigns against the beast’s neck, the two lunged up the path toward the Ridgeway on the heights of the Berkshire Downs.  An ancient relic sat atop one of the overlooks, a sarsen stone whose mysterious fissures provided a unique use.  Choosing the right hole to blow, a loud booming note could be sounded across the countryside, both near and far.  An archaic legend even accompanied the stone.  If the one who played upon it could make a sound loud enough to hear at Uffington White Horse, then he would be king!

At that dire moment, Alfred cared little for legends.  After the Viking’s horrible bloodletting at Reading, the boy was not interested in claiming his brother’s throne.  Aethelred could keep his royal seat… with Alfred’s blessing.  Still, Wessex had to be warned before the Danes’ next attack.  Time was short!  The villains were already pillaging below the Berkshire Downs.  If the West Saxon kingdom was to be saved, then her warriors must be gathered in defense of their king.   Fate hung by a raveled thread as the young prince hurtled up the narrow trail toward the top of Blowingstone Hill.

To the east, an enormous cold moon rose over Anglia, bathing her wintry hills in ghostly light.  Exhausted from the arduous flight, the boy’s beloved white mare glistened with froth in the freezing air. Recognizing the place by the frame of a primeval oak, Alfred pulled tightly on the reigns, setting his mount hard upon her haunches in a flurry of frosted earth.

Patting the steed’s thick neck, the boy whispered, “Wait here, girl.  I have business at the rock.”

The young prince stumbled, making his way toward the monolith.  The object was half-hidden in ivory twilight, guarded by the monstrous boughs of the sentinel tree.  Handling the frozen surface, Alfred’s fingers numbly searched for the right place to put his mouth.  There were many holes marring the stone’s face, but only one led deep into the heart of Wessex.  And through that single orifice he must breathe.

Low at first, a moan came… like a giant beginning to speak.  Then, spreading in all directions, the tone resonated down into the earth.  As the boy continued blowing, the hollow howl increased, escaping the hillside from a hundred crevices hidden beneath his feet.

The mare reared to paw the air, her hot breath riveting the murk like jets of smoke off the forge.  Still, the droning note climbed higher and louder in the pitchy sky, rising to echo among the stars.

Beaten men, huddling near a meager fire on White Horse Hill, boldly abandoned despair to face the night in hope. “It’s the Blowing Stone!” they shouted. “The king is calling us back!”

Yes, they heard, but others heard too!  Wolves in the forest and hounds at the homestead, both joined in single voice for Anglia’s sake.  Harmonizing with the herald of Alfred’s deep booming alarm, all of Wessex responded!  Candles lit and torches flared across the entire Saxon realm.  Sleep was banished as darkness surrendered to light.

Between Reading and Berkshire, the plundering Vikings listened and swore they heard Odin’s voice.  But they were desperately wrong.  Instead, the sound the Danes mistook was the roared battle cry of Wessex, answering the clarion call of Alfred’s sarsen stone!  Satisfied that the call to arms was heard, Alfred gathered his men at a nearby hill fort, leaving Aethelred to assemble his army at Hardwell Camp.

Resorting westward to the safe heights of the Berkshire Downs, both Saxon armies rallied atop the chalk hills, waiting for a better chance to thwart the devilish Danes.  And so began the trial of Wessex in her desperate year of battles