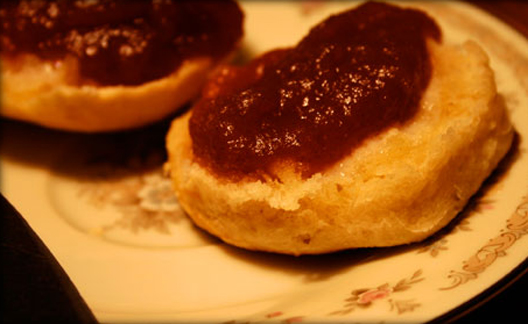 There’s a great big pan of cat-head biscuits a’bakin’ off in the oven…. Made from scratch of course. 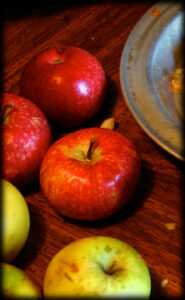 Settin’ before me is a butter dish with a fresh stick of real butter and a jar of homemade apple butter. All three of us are a’waitin’ fer those biscuits to get done.

I’m a’thinkin’ this here jar of applebutter is pretty near the end of the last years makin’s.

So, I guess, it’s time to start hunting up the kettle, clean the peeler and set things ready to make this year’s batch.

Applebutter makin’ in the Ozarks is a right smart tradition.

Apples are usually pretty plentiful here in the fall, especially Johnathan apples which are the best kind to use fer makin’ butter. 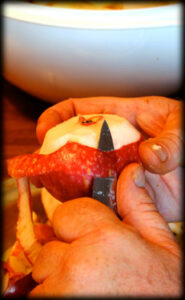 Mt. Vernon, Missouri, has a whole festival dedicated to apple butter: Apple Butter Makin’ Days. There is booth after booth of all kinds of crafts but the star of the show is the homemade apple butter.

Folks come from ever’where and pack off cases of the stuff.

Trinity Chapel — the church I grew up in — had their own annual apple butter makin’ day.

The folks would arrive early in the mornin’ (usually on a Saturday). 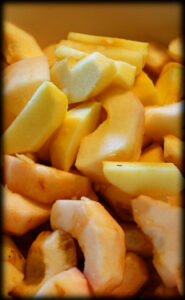 The men would get the fires a’goin’ and set the copper kettles. The ladies would be workin’ in the basement of the church. Some would be a washin’ and peelin’ the apples, others were cuttin’ and corin’, and others were settin’ the apples on to cook so they could be mashed.

After the mashing, the apples were transfered to the copper kettles along with the sugar and cinnamon. The men would commence to stirrin’ the applesauce with wooden paddles until it cooked down to butter. Then everbody worked on jarrin’ the apple butter.

It was a full day of hard work but you know what? It was fun too.

There was always stories and games and laughter. Lots of good food along with the fresh apple butter. Folks visitin’ and just naturally havin’ a good time for a worthy cause. The apple butter was sold to raise money for missions or some project the church was workin’ on (or to have money to help folks who were in need). 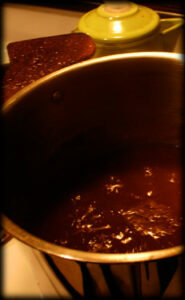 When I was a youngin’ at home, makin’ apple butter was as much a part of getting ready fer winter as hog butcherin’ or cannin’ green beans and tomatoes.We always made our own.

But instead of cookin’ it down in a kettle over an open fire, we would put it in the oven. The apple butter still had to be stirred but not nearly as often. You had to be mighty careful though. A feller could get burned real easy a’stirrin’ a roaster full of butter on the oven rack.

A lot of folks these days have stopped makin’ apple butter at home.

Most think it’s too hard a job. 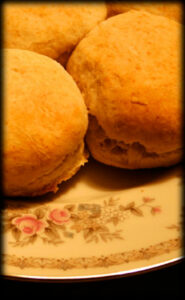 You peel and core the apples, cook ’em, mash ’em, and cook ’em some more.

It does take a good bit of time though and I think that’s what gets folks the most.

Speakin’ of time, I think it is about time to check on those biscuits.

The smell of ’em is near drivin’ me crazy. Here, pull yerself up a chair and have a biscuit. Slather it up good with some real butter and lay on the apple butter.

Now that right there is some mighty fine eatin’!