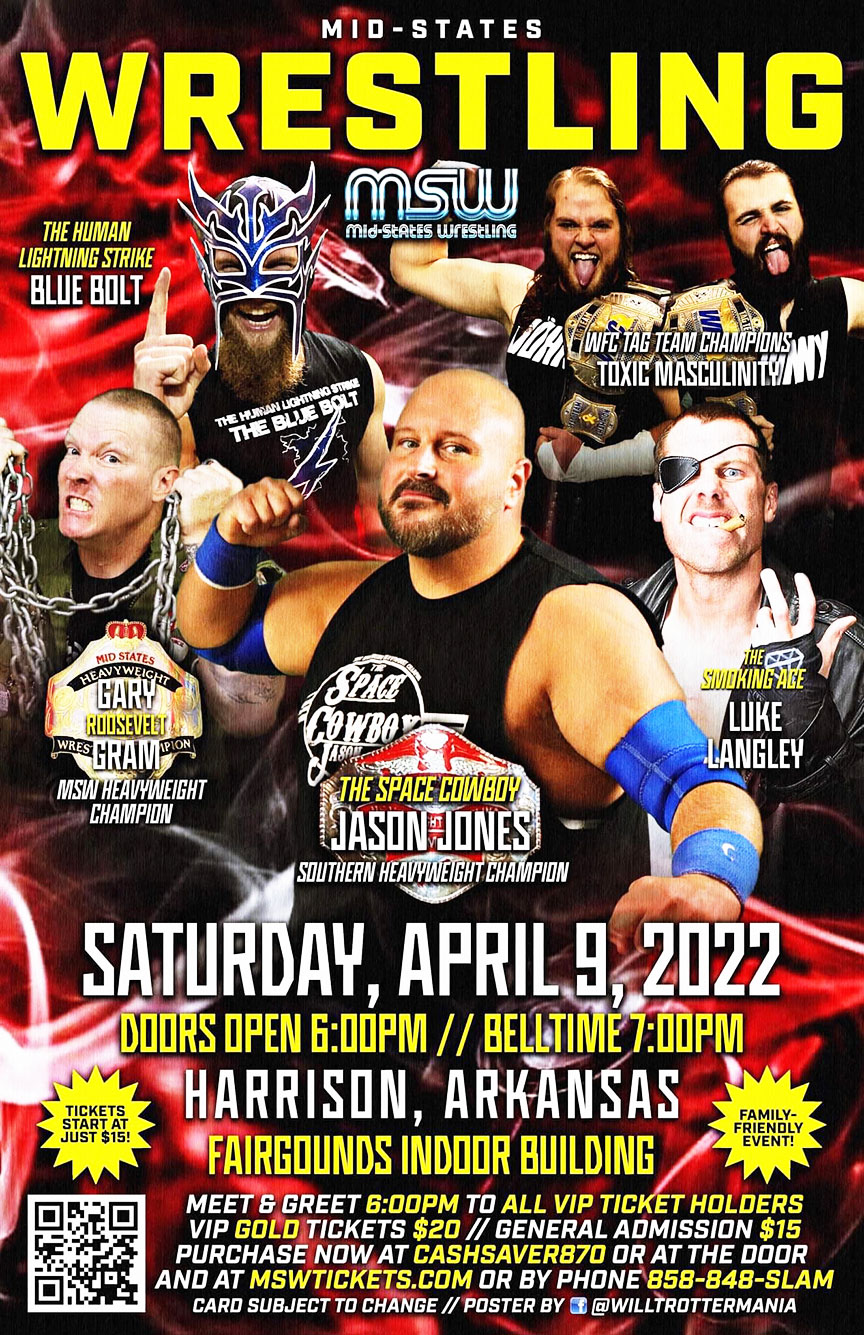 (Harrison, Arkansas) — Inside a steel farm building on the mountainous Boone County fairgrounds, the crowd gathers. Classic rock blares from speakers. The smell of BBQ pulled pork nachos wafts through the air. Blinding fluorescent light shines down on the ring.

“Tease me, please me, No one needs to know…” sings The Scorpions before fading suddenly.

Children wriggle near the ring. A man with a grand mullet and a t-shirt reading “Naughty Is the New Nice” hurries to his seat. White ceiling fans hum in the cavern-like space. The lights dim, obscuring sleeveless denim shirts, Confederate caps, Native American tattoos and Harley-Davidson shirts.

The crowd rises to the national anthem and the fog machine churns mist. Lights flash. It is a Saturday night in Northwest Arkansas and Space Cowboy Jason Jones, the “Hardest Working Man in Pro Wrestling,” is making dreams come true.

In the ring, Space Cowboy and Monster Thrash size each other up, heads together like two bulls. Thrash attacks first, Cowboy responds. Thrash distracts the referee, giving his teammate Tim Rockwell a chance to attack like the dirty cheat he is. Cowboy is surprised, backed into the corner and goes down. Thrash’s attempts the pin but there is no three-count as Cowboy keeps his shoulders off the mat. Thrash stomps Cowboy, following with an Irish whip and a clothesline. Cowboy body slams Thrash.

Rockwell distracts the referee, scratches Cowboy’s eyes. In the melee, the referee goes down, a double disqualification, but the fighting intensifies. Rockwell and Thrash pound Cowboy until Blue Bolt rushes in.

The disqualification means Space Cowboy Jason Jones retains the title of Southern Heavyweight Champion. He throws down a challenge to Monster Thrash and his accomplice:

“If you got the guts, show up here tomorrow!”

It is Mid-States Wrestling’s 20th year and Jones’ 25th as a pro wrestler. Born and raised in Harrison, Arkansas, Jones broke into wrestling in 1996 while still in high school.

“I started off ring announcing,” he says, “and would let the guys bump me around to see if I was tough enough to take it.”

“Mid-States is wonderful,” explains Roscoe Monroe, self-described “245 pounds of twisted steel and sex appeal with a body women love and men fear.” A Cabot, Arkansas pharmacist by trade, Monroe fell in love with the sport. “There’s a polish [to Mid-States] that is akin to Las Vegas. Their wrestling skills, the intensity of conditioning. This is all-encompassing sport.”

Jones’ Harrison gym is where it begins for many. Students from four states train here, one getting signed to World Wrestling Entertainment (WWE) in March.

“You’re getting the wind knocked out of you [with the force] of a car crash going 35 miles per hour. I have football players show up and I got them sucking air within two minutes,” notes Jones.

Cannonball Matthews from Better Than U University, a massive young man dressed in purple singlet and collegiate jacket, is getting into it with the fans because of his cocky attitude. His opponent, Gary Roosevelt Gram, MSW Heavyweight Champion, is high-fiving those ringside.

Roosevelt brings a junkyard dog aesthetic, complete with signature heavy chain. Dressed in red, he is a lighter but still imposing figure against Cannonball.

Cannonball pushes Roosevelt to the corner, begins doing push-ups, then flexes broadly. The crowd boos. Cannonball attacks but is trapped in a loop of right hands from Roosevelt. Ending on the mat, Roosevelt lifts his leg on Cannonball. The crowd instantly understands.

“You got peed on!” begin the chants.

Confused, disgusted, Cannonball jumps to his feet but is pinned in the corner by Roosevelt, who bites him on the butt.

The match concludes with Roosevelt’s suicide dive onto Cannonball from the middle rope all the way to the floor. Both men are disqualified. Cannonball attacks Roosevelt with his headgear but is driven off when Roosevelt swings his chain.

As Cannonball exits, the crowd takes up the chant again:

Here is carnival atmosphere hearkening back to the sport’s origins but sometimes belying the athleticism and risk.

“When I’m in the ring, I’m an inch from paralysis,” notes Jones.

“I’m a modern-day gladiator,” says James Legault (Jimmy Fiasco). “At the end of the day, everything we do is real. I’m hitting guys. I’m taking hits. Concussions are real. Injuries are real. I may not be a collegiate athlete but I’m putting my body on the line to entertain a crowd.”

In the ring, that reality is heightened by a mysterious realism made of building blocks simple enough for the youngest child to understand. Here is swagger, heroics, fear and virility with larger-than-life characters speaking truth through actions.

It is off-putting to some.

“Some people consider wrestling lowbrow,” explains Jones. “I say, ‘You ought to bring the kids out to the fair grounds,’ and they’re like, ‘Oh, no, we don’t want to be seen going to a wrestling match.’”

Jones’ own memories of wrestling began very young. He would crawl into his father’s lap and his dad would explain the sport:

“‘This is the good guy,’ he would say, ‘because he is tough and he is good. And this is the bad guy because he’s cocky. We don’t like him.’” Father-son bonding led to attending match after match.

“I could count on one hand the shows we missed at Shrine Mosque [in Springfield, Missouri]. My dad knew there was an element of cooperation in the ring [and] I loved watching him get tickled at little old ladies getting so pissed off.

Back in the ring, it’s time for Jimmy Fiasco to face Ice Man.

Ice Man is a cool and arrogant 160 pounds. The crowd boos even as commentator Sumo suggests Harrison may not be cosmopolitan enough for the wrestler’s Vanilla Ice soundtrack.

And then there’s Jimmy Fiasco.

“Weighing in at a ton of fun and coming from the cool club on the other side of town, the man with the neon hand!”

The match begins with a dance off.

“I am at heart a storyteller,” says Legault, speaking of his Jimmy Fiasco persona. “There’s so many heavy things going on in the world. I don’t need to take myself too seriously.”

In the ring, Fiasco is dropping it like it’s hot, much to the delight of the crowd and the disgust of Ice Man. Earlier, Fiasco had called out Ice Man on live Springfield TV.

“He told my mom to shut up,” said Fiasco as Jason Jones and Ryan Lee looked on. “I’m lacing up my boots and taking him to Pound Town! These hips? They don’t lie!”

Fiasco’s persona is bombastic but child-like. He holds his pink neon tape-wrapped hand high in the air and children, in particular, adore him. He represents that little boy who just wants to have fun when the adults are all-too serious for their own good.

Ice Man tires of the dance and attempts a running clothesline. Fiasco ducks out of the way, movements incredibly swift for such a big man. As Ice Man turns, Fiasco flips Ice Man over his shoulder like a sack of grain. It’s a beautiful slam, no more dancing, all business. This boyish bear of a man follows through, scooping his opponent into the air and slamming him onto the mat again. Ice Man rolls to escape.

Due to a series of unfortunate hi-jinks, Ice Man comes out on top. Hit by what appears to be brass knuckles, Fiasco goes down. A blonde girl stands on a chair shouting, “You suck, Ice Man! You’re a cheat!” She can’t be more than six.

“I feed off the energy of the crowd,” shares Legault. “Jimmy Fiasco is my personality cranked up to 11. He wants to hear the crowd having a good time.”

Here in this lighted square are villains we love to hate and heroes we love to love. This is performative honesty and vicarious release from social dictate.

The “hottest tag team in wrestling” is Toxic Masculinity — Johnny Lightning and Johnny Dynamite. With long hair, black jackets and tight silver pants, they make an imposing pair. They are cocky but the crowd adores them.

The Death Machine duo is Jim Fallon, a slight, bald man in black briefs alongside Doomsday in a black-and-white luchador mask with matching singlet. Doomsday towers over his partner.

“Weighing in at two Johnnies,” announces Lee, “is every man’s nightmare and every woman’s fantasy, the returning, reigning and defending WFC tag team champions!”

The match begins with Dynamite versus Fallon but Lightning pulls Dynamite away, literally by the seat of his silver briefs. Dynamite tags Lightning who tosses his jacket at his opponents, then tags Dynamite.

Dynamite grapples with Fallon who throws Dynamite into the ropes. Dynamite rushes Fallon, shoulder checking Fallon onto the mat, then drop-kicks him. Dynamite tags Lightning but Fallon tags Doomsday.

Johnny Lightning flexes for the crowd. Like something out of a cartoon, Lightning reaches back mid-flex to find the massive luchador menacing, attempts a headlock, then frantically shouts, “What do I do?”

Toxic Masculinity are comedic heels. Fallon is a ring technician and high flyer, having been trained by Extreme Championship Wrestling legend Perry Saturn. Doomsday is more beast than man.

The match concludes with a win for Toxic Masculinity but not before Doomsday crotch-scoops Lightning and slams him into the mat, then tags Fallon who does a diving head-butt into Lightning from the top rope.

The lights come up, crowd moving toward autograph tables. Wrestlers are among the crowd, less larger-than-life in their sweat and exhaustion but laughing, signing posters, posing with fans, hugging loved ones.

The little blonde girl has spilled Mountain Dew on her brothers. In unison, they make their way to meet Space Cowboy.

This is not the etheric stratosphere of sculpted magazine-cover athletes. This is family and brotherhood, framed by down-to-earth athleticism beyond most sports.

“They’re not lying when they call it a brotherhood,” says Fiasco.

The crowd empties from the fairgrounds but there is little doubt the hardest working man in wrestling is already working on his next show.

“It makes my heart happy, helping so many people make their dreams come true.”