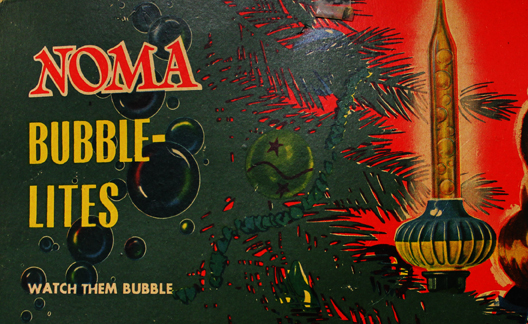 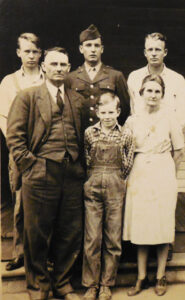 One of my favorite memories from my childhood years was going to Paw-Paw and Granny’s house. They were fantastic grandparents and I remember Granny doing certain things that didn’t happen at home. I remember that Granny would freely provide between meals and she never seemed to run out of store-bought cookies or apple butter sandwiches.

There was a mulberry “bush” in the front yard that Paw Paw kept pruned low so that kids could reach the berries (you had to climb for mulberries at our house).

At Christmas there was another marvel at Granny’s that no one else seemed to have: Lights on the tree that bubbled! I remember seeing the tubes filled with colored liquid, each with a bulb on the base, all happily bubbling away in the branches of the tree. These were a given every year and I was fascinated.

One year, Granny let me help decorate the tree. The string of lights had to be tested before they were hung so she had me plug it in and gently tighten each of the tubes. If one was loose the whole string would go out. I was only six or seven years old at the time so, of course, I overdid one and broke it. My curiosity at what made the light inside was satisfied when my exploring finger received its very first electric shock. My finger was also cut by the broken glass but Granny fixed it with a homemade cloth bandage and a kiss. 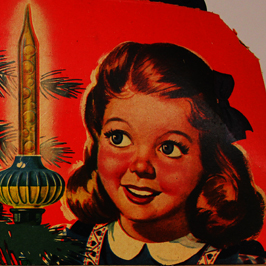 A few years later, Paw Paw put me to work in his Mid West Auto store and I learned much more about hardware and electric things.

As the years went by, the bubbling bulbs were fewer and fewer. As they were no longer made, Paw Paw replaced each broken or burned out one with a traditional bulb until there were only one or two on the string that still bubbled. This took quite a while because I remember coming home from college and talking with Granny about the single bubbler left on her tree. Then she asked if I remembered the cloth bandage. She was always Granny.

I finished college over 30 years ago. Christmas decorations have changed considerably. Fibre optics and now LEDs have come into vogue. I have heard of “retro” companies that are making old-time lights but have not seen them. 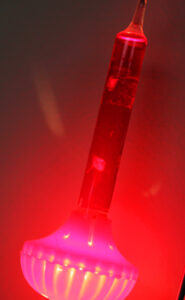 This fall, the farm house where my wife’s grandparents had lived for decades needed to be cleaned out and the contents sold at auction. Their path had been similar to Granny and Paw Paw: they married in the 1920s and survived the Great Depression all while raising a family.

They learned how to be frugal and seldom threw anything away that might have a future use or value. The contents of the house were a nostalgic tour de force. As we prepared for the auction, we marveled at more than 100 years’ worth of antiques, clothes and books.

Up in the attic, stored away for more than 50 years, I found my treasure.

It was used and had been broken but it was packed back into its original box and saved. A string of Christmas bubble lights!

One wire was pulled out of a socket and there was a broken tube. Two of the tubes had leaked and were dry. I still treated it like the prize it was and stashed it in my truck rather than let it sell for pennies on the auction table. 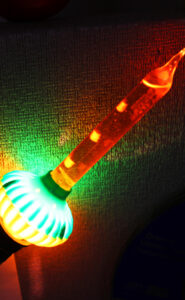 It has been two months since the auction. The wire has been soldered back onto the socket. With this being an old-time string wired in series, I could not make it light up but did check continuity on each of the bulbs to see if they were good (some of those electrical skills learned in college were actually put to use and Granny and Paw Paw would be proud).

I’ve been searching for replacement bulbs. Those found on the internet were the “retro” bulbs and are a full 110 volts. They won’t work in a series string. I tried lighting stores, Christmas shops and even the old time 5 & 10 store. No luck. 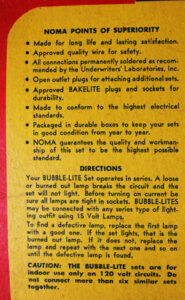 Today, I tried the flea markets in old downtown Branson. In the fourth market — after holding out my broken sample — the clerk said “There are some in number 37’s case!” We searched the consignment case, and sure enough, in a small basket on a bottom shelf were exact matches. The real McCoy! They were five bucks a piece. Each one probably more than the whole string cost new but well worth it in my eyes. 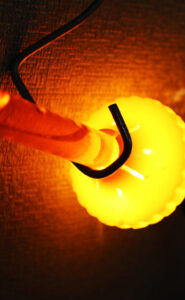 The repaired string now decorates the wall above my desk. Work is long over but I’m still here looking up at them thinking about my in-laws who had the foresight to keep something because there still might be some use in it.

And I’m thinking about Paw Paw and Granny. They have been gone a long time but today both are here with me as these tubes of colored liquid bubble away happily.

Originally written November 2009 and published on State of the Ozarks December 9, 2015.