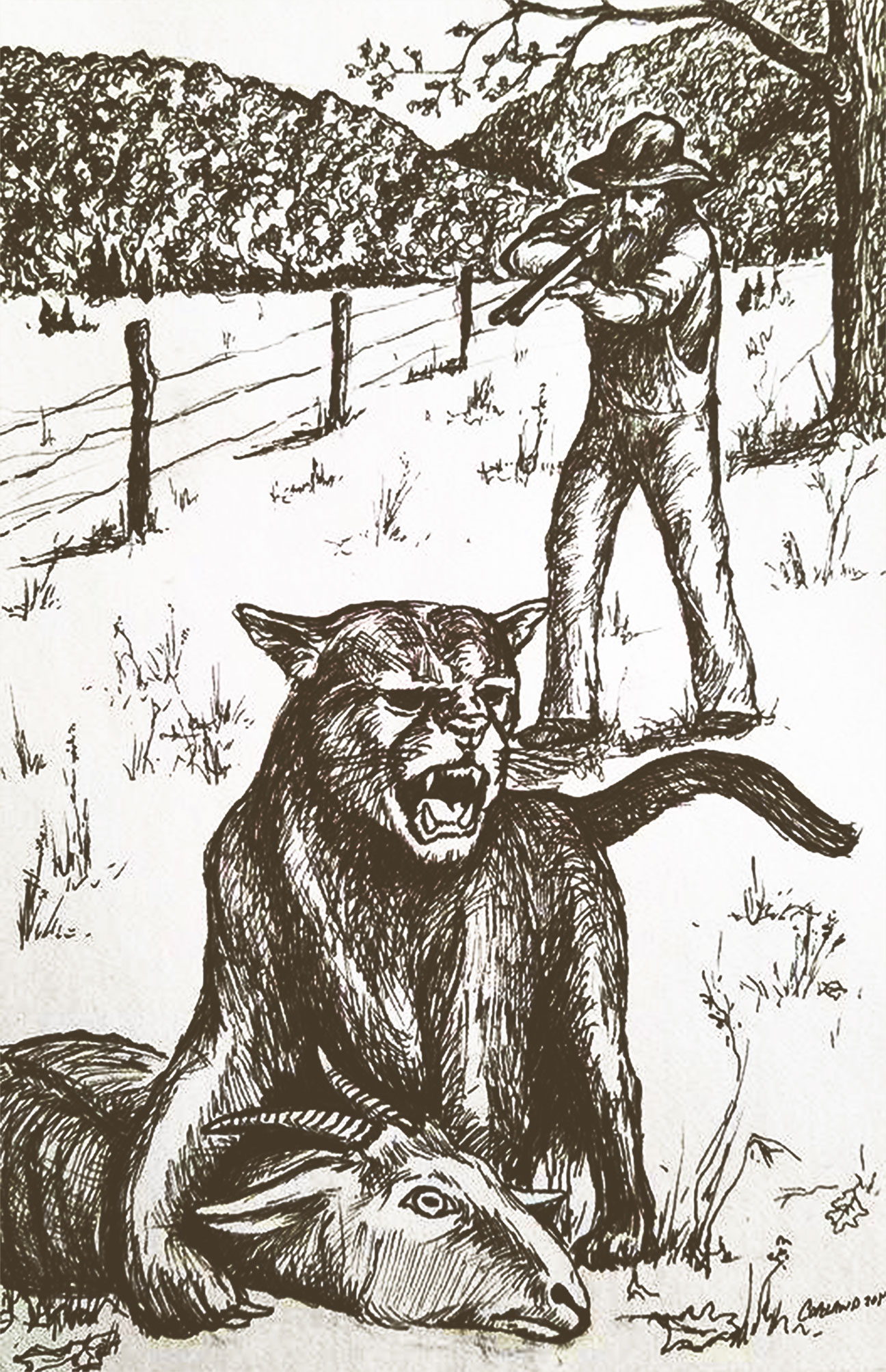 by Clint Lacy and Joshua Heston.

“There are no black panthers in Missouri. It is a myth like Bigfoot.” — Michael Flaten

Years ago at my grandmother’s house, I discovered an old high school yearbook. Thumbing through the pages, I found my uncle’s senior photo with the usual details of titles, predictions and nicknames.

“Your uncle once saw a black panther on your great-grandfather’s farm but nobody believed him,” explained my father when I asked him.

Uncle Phil’s panther sighting took place in Stoddard County, Missouri, in the 1960s. Back then his biggest skeptics were his peers. A brief internet search on the topic of black panther sightings in Missouri will turn up the occasional news story, blog post or photo of the elusive cat.

With today’s new technology, citizens are no longer dependent on the “gate keepers” of old media. Convincing one’s peers of a black panther sighting isn’t nearly as difficult as it was when Uncle Phil was in high school.

Today, if a resident spots a black panther, his biggest critic will be the Missouri Department of Conservation. Officially the MDC has this to say about black panthers in Missouri:

“Black panthers” are not native to North America, but they do exist as melanistic (black color) phases of the leopard (Panthera pardus) found in Africa and Asia and the jaguar (Panthera onca) of Mexico and Central and South America. Throughout its range, no melanistic (black) mountain lion has ever been documented by science….In 1996 MDC established a Mountain Lion Response Team (MLRT) with specially trained staff to investigate reports and evidence of mountain lions.

“The MLRT has investigated hundreds of mountain lion reports. Animals reported as mountain lions include house cats, bobcats, red foxes, coyotes, black and yellow Labrador retrievers, great Danes and white-tailed deer. Almost all reported tracks have been those of bobcats or large dogs.” (1)

The subject of black panthers in Missouri surfaced again on February 8, 2017.

“Here about a month ago my son and I were checking cows… and we saw something black down on the pond and I said ‘[L]ook at that it looks bigger then a cat[.]’ We got fairly close but we still weren’t really sure. It looked bigger then a cat.  Then, probably about a week ago I saw it a long ways off in the distance and I was in the tractor and when it saw me it just squatted down and tried to hide. I didn’t go towards [me] it I just stayed where [it] was.” — Dennis Pierson (rural Maryville, Missouri), SJ Post, St. Joseph.

Later, Pierson “saw the animal come out of a ditch about a quarter mile away.” He was “sitting in his pickup and was able to snap a few photos,” saying, “It was probably 30 inches long or maybe longer and it probably stood up a foot or so.” (2)

The SJ Post took Mr. Pierson’s photo to the Missouri Department of Conservation. The MDC’s response was a familiar one:

Joe Jerek of the Missouri Department of Conservation said “comparing the animal to the size of the nearby fence post and logs… it’s likely just a large house cat.” (3)

My father now owns the farm where my Uncle Phil reported seeing a black panther in the 1960s. Over the past 20 years, my father, mother, and their neighbors have all spotted the large black cat that isn’t supposed to exist.

Family friend Bradley Rhodes of Advance, Missouri, reported he recently saw a female black panther near my parents’ farm. “She was carrying her cubs,” he says.

I took to the Facebook group Love my Ozarks in search of others who might have spotted black panthers in Missouri. The response was impressive.

“When I was a kid in the mid-‘70s my dad ran a set of cattle pens. People around was calling the sheriff’s office to report a woman’s screams. Dad and I heard it one night. We were bringing a load of cattle in late one night. There was the biggest, blackest cat you ever saw go across the road. We didn’t say anything until we unloaded our cattle. [Dad] looked at me and asked if I seen what he did. That was in Ozark County, Missouri.” (4) — Faron Price Gainesville, Missouri

“At least three people at three different times in the last 10 years have seen one around the old Frisco train yard.” — Joseph Franke, Springfield, Missouri.

“My husband saw one when he was in his tree stand deer hunting a few years ago. It was walking along our creek. A few months ago, our neighbor asked us if we had seen a black cat around. I said ‘A great big one?’ ‘Yeah.’ I guess another neighbor saw it crossing the road.”  —Brandy Moore Lovell, Lowry City, Missouri

“I seen one in the early ‘90s crossing a field in South Camden County. My grandparents both talked of them especially my Grandmother [who] had to ride a horse sometimes after dark to take food to an old uncle down the road. She talked about hearing them scream.” — “Aunt B“ Miller, Richland, Missouri.

“I did when I was a child. My sister, her friend and I were out walking on the back part of my parents’ property in southern Hollister. All I know is we all ran as fast as we could and it did not follow. It was big, black and [had] long tail.” — Brandy Warren Thomas, Hollister, Missouri. (5)

“Yeah, it was in the field and I stared for awhile because it was so black but I couldn’t be sure what it was. Finally it walked down into a ditch. That’s how I knew it was a cat. No mistake.It was so far away that I could still see it was a cat.  A house cat would have been too small to see the features so it was a lot bigger than a house cat. Very cool to see. It was January 19 [2017] at 11:28 lol.  I just looked up my text to Davy. The cows were all looking at it mooing. [That] is why I spotted it.” — Tammy McCleary Stotts, Bollinger County, Missouri (6)

Despite claims by the MDC, many Missouri residents have seen black panthers. None of the residents — mostly farmers, individuals accustomed to wild and domestic animals — remotely felt they had spotted a house cat. Most report seeing the large black cats near drainage ditches, creeks, and around cattle or other livestock. Several have stated the big cats sound like a woman screaming.

There was at least one skeptic who responded to my inquiry on the Facebook forum. “There are no black panthers in Missouri. It is a myth like Bigfoot.” — Michael Flaten, Montevallo, Missouri (7)

Jo Schaper, responding to my inquiry, offered this helpful information, “In the old Ozarks they were called painters, or pant-ers. Read some old newspaper reports.” (8)

A search of Missouri newspaper archives turned up an article from The Farmington Times, December 19, 1919 edition entitled Anyone Lost One Panther?

“If rumors reaching this city the past week are true, then there may be an opportunity for the old-time big game hunters to again put into use their knowledge of wood-craft and the stalking of big game, the bare thought of which is calculated to give the present day hunter a case of buck [fever].”

“Such rumors are to the effect that a panther has been seen in the wilds a few miles south of Doe Run, where in those fastnesses, practically unmarred by the hand of man, it is enjoying life and liberty as though in the primeval forests…two sons of J. C. Arnoldi had recently seen a panther crossing a road, while several other people claim to have heard the cry, or scream, peculiar to the panther, and which sounds too humanly agonizing as to be in itself terrifying to the uninitiated.” (9)

The article from the 1900s certainly contains some similarities to the stories shared by modern day witnesses who have spotted the big black cats (particularly the bone-chilling screams).

The December 25, 1904, edition of the St. Louis Republic carries a story of a zinc miner in Marshall, Arkansas, who killed a panther with a stick of dynamite.

“Luke Hartman, a zinc miner, who lives about 12 miles from here along the Buffalo River, had a hair-raising adventure with a panther a few days ago. He had been to this place to buy dynamite to use for blasting on his claim, and when about a mile-and-a-half from home on the return trip he saw in the road ahead of him what appeared to be two gray cats playing in the dust. Wondering how the cats came to be in that neighborhood, he followed them through the underbrush and was terror-stricken to find himself confronting a big she-panther. The panther placed herself In front of her kittens and lashed the ground angrily with her tail. Hartman had no weapons, and realizing his danger, he ran back to the road, but the panther followed with long jumps. He turned down the road toward his house, fleeing for dear life…” (10)

The story goes on to state that Hartman was able to save himself by lighting a stick of dynamite after climbing a tree.

“No wild animal was more feared than the panther. Its cry was something like that of a woman in distress. Panthers — or “painters” as the pioneers called them — would seldom attack a human unless first wounded or suffering from hunger.” (11)

In microcosm, the question of an indigenous black panther in the wilds of rural Missouri quickly becomes cultural, not biological, and highlights division lines within national strata.

Colin Woodward’s American Nations: A History of Eleven Rival Regional Cultures of North America explains the conflict between “Yankeedom” (which includes the Upper Midwest) and “Greater Appalachia” (which spreads from West Virginia across the Ozarks Plateau).

“Yankees have the greatest faith in the potential of government to improve people’s lives…. For more than four centuries, Yankees have sought to build a more perfect society… through social engineering.”

Greater Appalachians, however, came from “rough, bellicose settlers from the war-ravaged borderlands of Northern Ireland, northern England, and the Scottish lowlands…. [with a] warrior ethic and a deep commitment to individual liberty and personal sovereignty.” They are “intensely suspicious of aristocrats and social reformers.” (12)

Today, state-managed conservation departments increasingly reflect Woodward’s sense of “Yankeedom,” carefully telling farmers that they and their kin simply aren’t smart enough to tell the difference between a house cat and a 64-to-220-pound apex predator wandering through their back pastures.

In an age of high communication, this cultural gap appears only to be widening with a near-guarantee of ideological conflict.

5: Comments from an inquiry about black panthers on the Facebook group Love my Ozarks,

7: Comments from an inquiry about black panthers on the Facebook group Love my Ozarks,