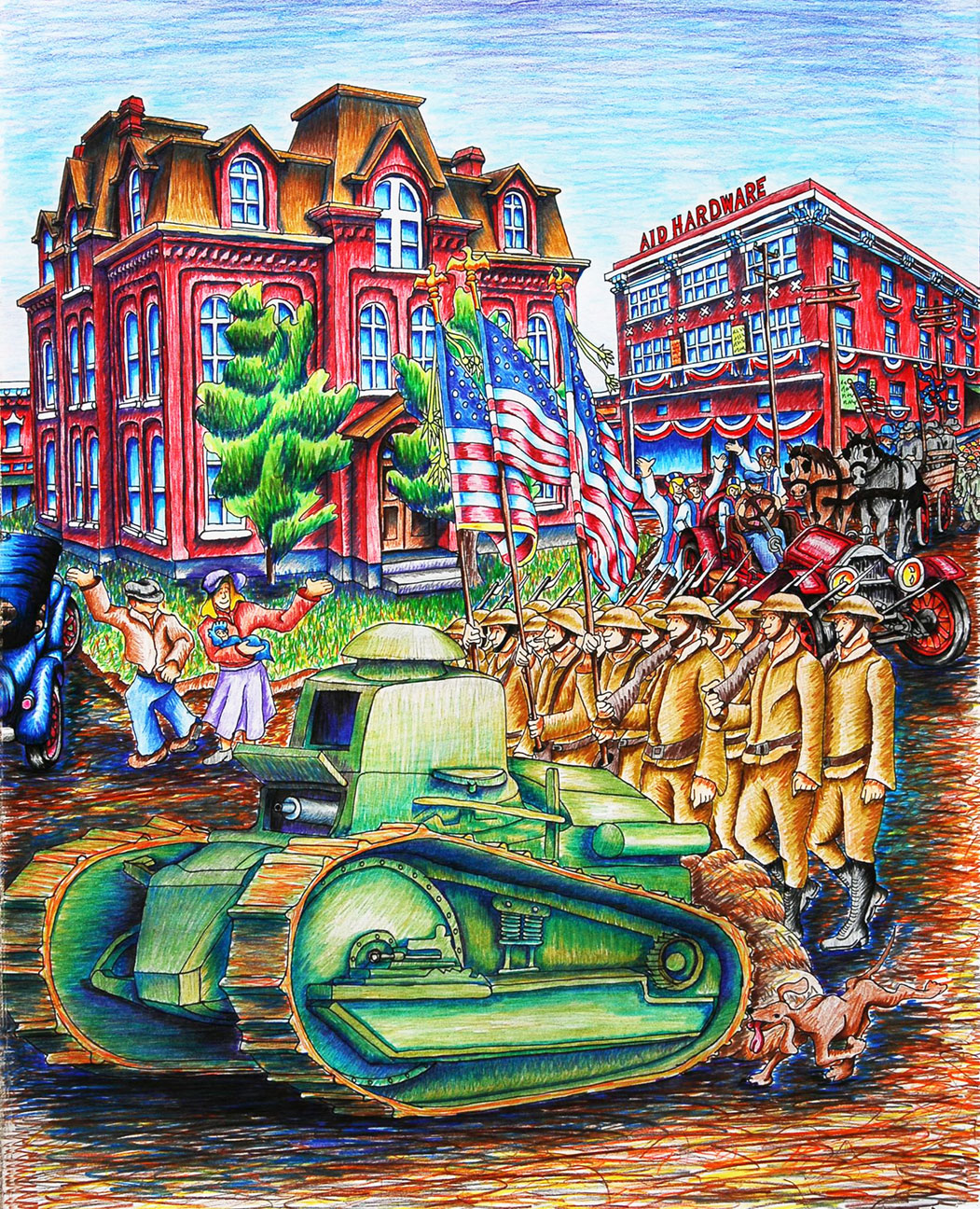 At the conclusion of the “war to end all wars,” a battle tank was brought to West Plains, Missouri, on the railroad. After unloading the tank from the train, a parade was organized to celebrate the end of World War I. Following the battle tank was a troop of 50 “dough boys,” a group of victory girls riding in an open touring car, a horse-drawn wagon filled with Civil War and Spanish-American War veterans, and the West Plains Boy Scouts bringing up the rear. And so began the annual observance of Veterans’ Day in West Plains.

At the end of each school year, I always developed a local history unit for my students at both Mountain View Elementary and Richards R-5 Elementary – West Plains. After a topic was chosen, researched, and analyzed; the students began a creative writing assignment where they “wrote” themselves into the event. They could either accurately chronicle the account in first person, or they could modify history by their intervention on the scene. As the entire class wrote, individual students were selected from the group to color the classroom mural, which literally became our “window on the past.”

As the mural developed, so did the children’s imaginations. Everyone got a chance to color while the other students wrote. I did NOT discourage the writers from occasionally monitoring the mural’s progress… simply for the reason of “inspiration.” In fact, I encouraged it by saying, “Stop your writing for a minute and see how our mural is coming to life.”

When our unit was finished, the children’s stories were published in several local newspapers, and the murals were permanently displayed at the Howell County Courthouse, West Plains, thanks to the kind and devoted sponsorship of Judge David Evans. Now, years later, no one remembers the children’s amazing stories, although their murals are still housed throughout the Howell County Courthouse… top to bottom, and room to room.

Shootout With the “Ma”Barker Gang – Death of Sheriff Kelly

Native of Van Buren, Missouri, C. Roy Kelly,  formerly a Springfield candy salesman and a restaurant proprietor of Mountain View, Missouri, was elected as sheriff of Howell County.  A friendly, well-respected man who as sheriff seldom wore a gun, was called to the Davidson Motor Company to question several individuals suspected of robbing C. C. McCallon’sclothing store.   However, totally unaware of the danger lurking inside the garage on East Main, Sheriff Kelly approached the group of men seated in their blue DeSoto sedan. As he reached for the car door, shots rang out!  Although he would never live to realize it, Sheriff Kelly had just encountered the infamous “Ma” Barker Gang and by his own death had foiled their plot to rob the West Plains Bank.

In 1839 the Howell family bought the Adams’homestead located on the ground where the Howell County courthouse now stands. Pictured in the foreground is the town spring located in the basement of the old West Plains Library building (currently owned by the First Baptist Church). Near the spring, some of the Howell children are playing. Josiah Howell, in the wagon with his wife, is handing the money for the purchase of the land to Mr. Adams who is standing on the ground. Floating above their heads on a cloudy foundation of smoke rests the future outcome of this simple land transaction.

The mural was a visionary interpretation, connecting the earliest events in Howell County to the eventual development and growth of its county seat – West Plains. The idea for the mural came from a passage of Scripture in the Revelation where John sees the New Jerusalem coming down out of Heaven. Although the analogy might be a little “lofty,” still the smoke of Mr. Adam’s rustic cabin provides the foundation for the eventual city. In this mural, the far-distant past and recognizable past are combined.

Concluding the Howell County Mural Project, the last Richards R-5 Elementary, third-grade mural portrays the Howell County Courthouse as it appeared in 2010. Over a period of eleven years, Mr. Woolsey’s third graders produced a series of twelve murals chronicling the development of West Plains, Missouri, and surrounding area. Prior to his work at Richards Elementary, Mr. Woolsey’s fourth-grade students at Mountain View Elementary also produced a series of murals depicting the community history of Mountain View in the northeastern corner of Howell County. Together, the complete set of murals are now on display at the Howell County Courthouse in West Plains, Missouri.

It was late in the evening when the Memphis Night Express passed through Howell County on its way to Springfield, Missouri. Suddenly, the passenger train found itself surrounded in a timber fire covering over 100 acres. The train was heading for a railroad bridge at the bottom of the Brandsville hill. Little did the engineer know, but the bridge had also been damaged by the inferno.  Quite unexpectedly, the figure of a man appeared on the tracks waving a railroad lantern. The engineer took immediate action by applying the brakes, pouring sand on the rails, and turning the wheels in reverse. Just as the front of the engine reached the bridge, the train stopped. The passengers were pressed into service repairing the bridge. After the train was safely on the other side, everyone began searching for the stranger who had warned them. However, the mysterious individual had disappeared.

At the conclusion of the “war to end all wars,” a battle tank was brought to West Plains, Missouri, on the railroad.  After unloading the tank from the train, a parade was organized to celebrate the end of World War I.   Following the battle tank was  a troop of 50 “dough boys,” a group of victory girls riding in an open touring car, a horse-drawn wagon filled with Civil War and Spanish-American War veterans, and the West Plains Boy Scouts bringing up the rear.  And so began the annual observance of Veterans’Day in West Plains.

In 1938-1939, five small rural schools merged to form one larger district, Consolidated No. 5. The five were Rudville, Lone Pine, New Central, Grimmett, and Galloway. The new, Consolidated No. 5 building was a two-room, rock structure built near the old “Lone Pine”school.  In 1956-1957, eight other rural districts joined with Consolidated No. 5 to form Reorganized No. 5. At this time two more classrooms were added, making a total of four. The entire building was still constructed of native stone. There were five teachers employed within the “new”Reorganized No. 5 District. The classrooms were divided into K-2, 3-4, 5-6, 7-8, plus music.  The custodian employed within the newly formed Reorganized No. 5 District was a man by the name of Homer Richards. He had worked in the district for about two years prior to his death. At the time of his death, the relatively-new name of “Reorganized No. 5” was again changed to that of Richards R-5 in honor of Mr. Homer Richards.

The school building is quite literally haunted by the friendly ghost of Homer Richards.

The quasi-new structure is built “over and around” the old original building… which I think is totally amazing. The old original rock school, Consolidated #5 / Reorganized #5, is totally enveloped in the new brick, cement block, and metal skin with attic and all (NOTE: The old building sits immediately under the peak of the new building’s roof). Thoughtfully, one narrow section of rock is left exposed on the upper floor so the students / visitors can actually see the old building hidden beneath the cement block and brick veneer. So, the old “habitat” is left intact to house the original memories of the place… as well as the ghostly protector, i.e., the school’s first benevolent custodian.

Now, concerning Mr. Homer Richard’s ghost… I have personally heard him myself. Working late at night on curriculum, I have distinctly listened to an intruder walking in the hallway near my classroom door on the upper level. When I stepped out of my room to identify the individual either as a janitor or an unwanted guest… ABSOLUTELY NO ONE was there. A fourth-grade teacher told me the very same story, hence her reason for not staying in the building without other teachers present.

The janitors employed at Richards R-5 during my years of teaching added an extra detail. Since their shift lasted close to midnight, there should be no one in the building except them. However, on numerous occasions, the custodians would hear someone walking down the hall in their direction, whistling with a man’s voice. The one janitor (who I emphatically trust when telling this story) said he was cleaning the cafeteria as the footsteps and sound of whistling approached. Quickly rushing into the hallway to confront the intruder… ABSOLUTELY NO ONE was found. Another custodian standing nearby vouched for the event.

So, I, another teacher, and several janitors have on repeated occasions heard the presence of dear old Mr. Homer Richards, faithful caretaker of Richards R-5 Elementary School.

On the many evenings I worked late, I always felt comforted knowing Mr. Richards was still on duty at his beloved old school.

Before the advent of trains in southern Missouri, many settlers traveled to St. Louis on very rough trails in the early 1840s to buy supplies and other necessary goods.Following the devastation of the Civil War in the 1860s and the laying of the railroad in the 1880s, the residents of West Plains prepared to construct a new brick courthouse in the center of their small town.

The Battle of West Plains

Following the intervention of four, prominent West Plains’businessmen, the railroad’s intended path was rerouted away from Peace Valley and White Church to instead pass through West Plains, Missouri.   In the next few years, the population and growth of West Plains, Missouri, increased dramatically.

Moving on the wings of a bird, the first “aeroplane” was reported by the West Plains Quill to have followed the railroad tracks from Mammoth Spring, Arkansas, to West Plains, Missouri.  After circling the courthouse to the delight of local residents, the novel machine disappeared into the blue!

Swaying to the haunting strains of the popular dance tune, “At Sundown,” many young people in West Plains and from several surrounding communities were oblivious to what was about to happen late Friday evening, April 13, 1928.  Suddenly from East Main a towering column of flames exploded into the air as the building housing both the Weiser Motor Company and the Bond Dance Hall was engulfed in a raging inferno!  The force of the explosion was so horrendous that it broke every window on court square while tearing away the western, brick wall of the West Plains courthouse.  Less than 50 years old, the beautiful court facility would later be condemned and replaced as a result of the Great West Plains Explosion.

West Plains, Missouri, has had a rich history of celebration including the arrival of the traveling circus.  Some of the great circus events in West Plains include the years of 1897, 1905, and 1916.  The 1920 circus is featured in this Richards Elementary mural.  Several trains with many carloads of animals, performers, and equipment were unloaded along the tracks in preparation for West Plains Circus Day.  Thousands of people traveled for several miles to be entertained inside the “big top” tent.  Some individuals journeyed as far as 50 miles by horse and wagon over a three-day period to attend the festivities at West Plains.