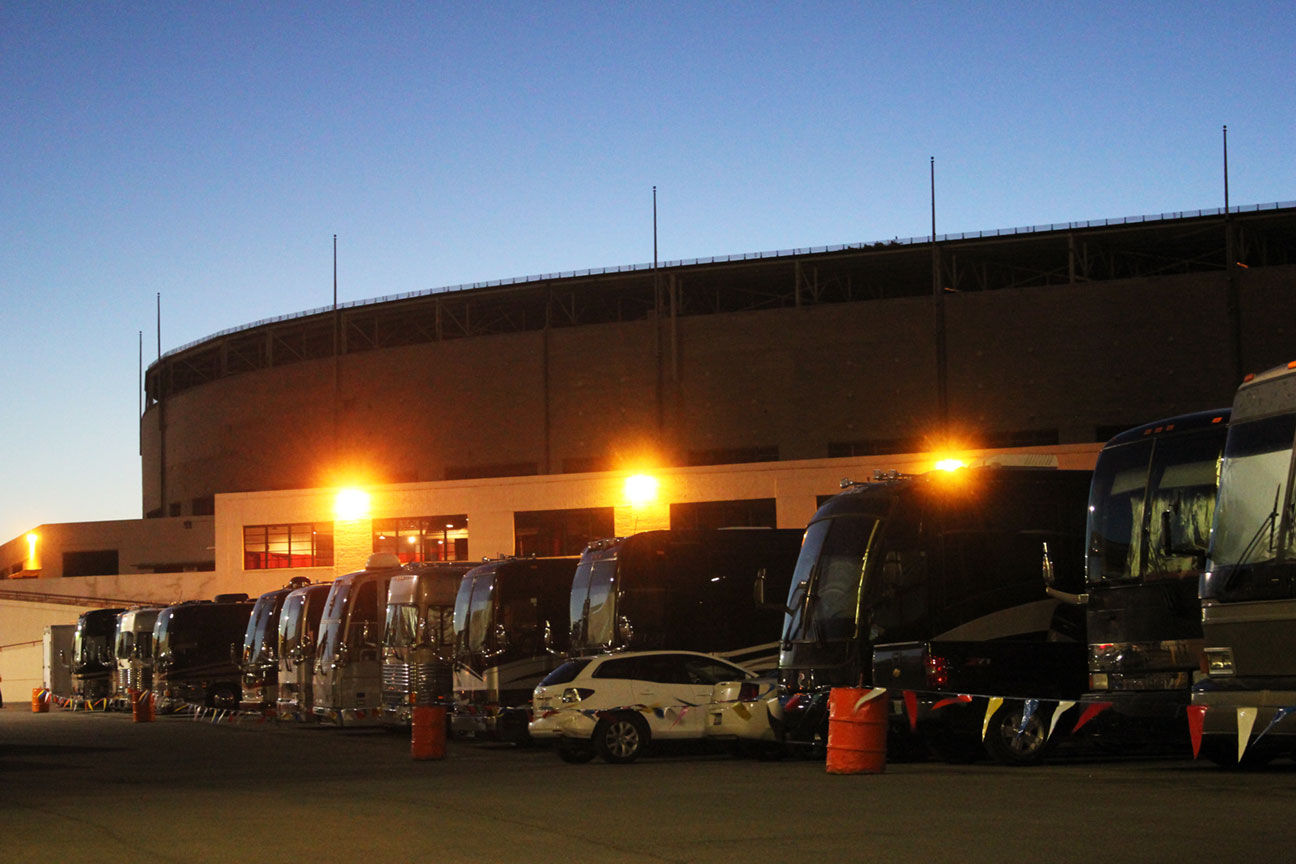 LOUISVILLE, KY —The National Quartet Convention, known simply as “NQC,” is the iconic event of the year for Southern Gospel music. For the last 20 years, Southern Gospel artists from across the United States (and around the world) have converged upon Louisville’s sprawling Kentucky Fair and Expo Center right on Interstate 65. It has all been happening right here every year since 1994, when the industry out-grew comparable facilities in Nashville.

Lavish buses for gospel greats like The Kingdom Heirs, The Kingsmen, The Hoppers and The McKameys line the back parking lots while the East Wing’s exhibition hall — all 175,000 square feet of it — fill with groups’ booths. It is an exuberant time for Southern Gospel music. Beginning back in the ’90s, the television work of Bill Gaither made artists like Mark Lowry, Guy Penrod, David Phelps and Russ Taff into household names for much of America.

This is the last year for Louisville, as the National Quartet Convention is moving to Pigeon Forge, Tennessee, in 2014. It is 20 years of a rich history, momentous occasions in an industry held aloft by grassroots fans throughout the Midwest and the South. There have been many memories made here over the years.

PLATE 2. Monumental 1990’s-era architecture marks the entrance to the Kentucky Fair and Expo Center, fourth largest convention facility in the United States when it was first built.

These cavernous, impersonal convention spaces become — for one week each year — home to an itinerant family of fans, artists, children of artists, ministers, and support staff. Careers have been born, lifelong friends made. It has been a place of tears and pain as well. Many artists and friends have passed on in the last 20 years and for many, it can be a bittersweet time. Thousands remember learning of the 9-11 terrorist attacks while gathered here. Back in 2001, the Quartet Convention was one of the few national gatherings that did not close that tragic day.

PLATE 3. The horse run behind the Exhibition Center must be crossed by arriving artists, media and staff.

I arrived late on Monday night after driving through the extraordinary mountain country of the eastern Missouri Ozarks, the delta land of Cairo, Illinois, and the old hills of western Kentucky. After eight hours on the road, the Expo Center was an unknown, intimidating blaze of lights and activity in the hot, late summer night.

Back portions of the sprawling facility are ringed by horse barns — Churchill Downs is just next door, after all — making the forest of fancy exhibitions smell faintly of farmyard. Skywalks and multi-level escalators grace the entrances while Freedom Hall, the 19,000-seat arena usually reserved for basketball games, indoor rodeos and massive rock concerts, was host to a five-hour concert with the Lesters, the Sneed Family, Triumphant Quartet, Ivan Parker, the Collingworth Family and many more.

For a country boy just in from Missouri, I felt a bit out of place.

Southern Gospel is grassroots Americana at its best and many of the industry’s greatest artists are surprisingly downhome. These are stars often chosen by regular Americans scattered across rural states and in local churches — not necessarily chosen by music executives in Nashville or LA. And behind the phenomenal stage clothes, the make-up, and the lighting, these are artists who can many times exhibit humility, appreciation, and Southern hospitality unexpected from “stars.”

PLATE 5. The renowned Hoppers on stage and on camera.

In short, it is a friendly place… It is also an insanely busy place with Regional Showcases beginning at 11:30 each morning, Featured Artist Showcases beginning at noon, the opening of the exhibition hall at 4PM, and Freedom Hall’s arena opening up for a five-hour concert of the best of Southern Gospel each evening at 5:30.

Personal highlights are many. Just a few include…

Can you tell I’m becoming a fan of Southern Gospel music?

PLATE 6. The Isaacs on Main Stage.

So, how does all this week-long Southern Gospel craziness work? It’s actually comparatively simple:

Every exhibitors may sing one song on the Regional Showcase Stage. This show lasts every day from 11:30AM until 3PM and averages 20-25 groups a day. Well-attended, a panel of judges choose four winners from each day. Of those four winners, two artists will perform on the main stage — in massive Freedom Hall — each evening. The Regional Showcases culminate with a 20-top-groups session on Saturday — and two final winners. This year it is The Wilhites (Texas) and The Stephens (Alabama).

Missouri’s own Southern Raised, The Punches and The Goulds all won a place in the regional top 20 thus representing the Ozarks mighty well.

Additionally, there is a Bluegrass Pickin’ Jamboree produced by Ben Isaacs, Bill Gaither’s Homecoming Sing-a-Long, the NQC Music Awards (with many congratulations to Silver Dollar City, Dollywood and our own D.A. Callaway for winning the Les Beasley Impact Award), a conference with Dr. David Jeremiah, and a “Parade of Pianos” hosted by Gerald Wolfe and Gordon Mote.

Every night, the big concerts begin at 5:30 (and last until after 11). These high-powered events include The Hoppers, Jeff & Sheri Easter, Gold City, Dixie Echoes, the Collingsworth Family, The Perrys, The Isaacs, the Mark Trammell Quartet and Mark Lowery, among many, many others.

This year was also a time for breakout artists like bass singer — and youngster — Chandler Johnson as well as the central-Kentucky based Penny Loafers, an a capella group made up of Alan Pike (bass), Larry Nichols (baritone), Kevin Slemp (2nd tenor) and Michael Hunt (1st tenor).

PLATE 7. The Penny Loafers are spotlighted next to the main stage in Freedom Hall.

Modern-day Southern Gospel has a unique sense of glitzy, yet-homegrown style — part high-powered Music City, part-rural Appalachia. As you listen to the voices in the Exhibition Hall, the drawling lilt of Kentucky, Tennessee and the Carolinas predominate. And looking around, it is a unique juxtaposition — scenes of men in matching, three-piece suits walking through horse stables; of children (kids of high-ranking artists) playing amidst the cavernous halls; of long lines of million-dollar buses idling diesel fumes in the back lot; and vast throngs of Southern Gospel fans descending, en masse, upon the Freedom Hall arena.

Twenty years of Gospel music history right here. You can never stop the music. It is a message of compassion, hope and joy, a message that can resonate in this century as well as it has in the last: a message that says worship can be joyful, loud, and fun.

But this is the end of a Louisville, Kentucky-era. I’m glad I didn’t miss it.

“…AND THE HAND OF THE LORD WAS WITH THEM AND A GREAT NUMBER BELIEVED, AND TURNED UNTO THE LORD.” — ACTS 11:21