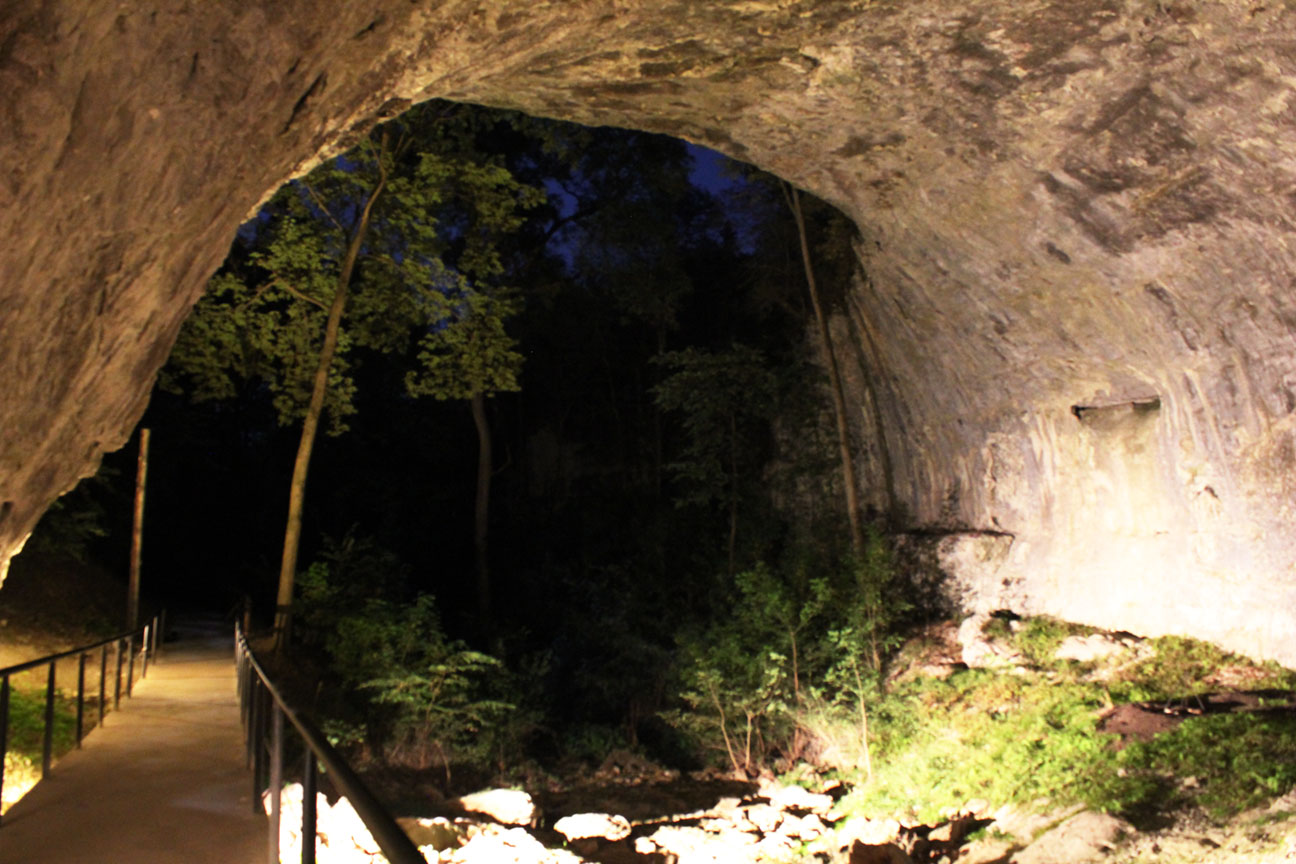 Here in this dark holler of the Ozarks is a cave of great and powerful majesty. The Osage people called this the Place of the Underground Spirit — Winoca. And here I sit in the near-darkness, quietly listening.

It is mighty easy to believe.

The ancient qualities of the Ozarks are so real here. Water ripples far back in the cave, echoes in the darkness. Torchlight flares. The shadows become wild. Untamed. Stars (far older than even this ancient limestone) look down — agelessly — through white oak leaves, dry, clattering in the night wind.

The season is nearly done..

PLATE 2. Tuffa formations at the mouth of the cave.

A centuries-old tale is here in the rocks and ferns and running water. It is a tale told in the limestone bed of a cavern ceiling, rife with sea creature fossils. It is a tale of the struggles of men — a story so old and yet so familiar.

It is the Ozarks. It is Smallin Cave.

And, as I sit here at the cave mouth, the 21st century seems a hundred years away. There is no sound of traffic. No artificial light. Only the cellphone tucked into my pocket reminds me there is a bright, wild electronic world just a few moments away.

PLATE 3. The winding walkway at right was built in by Joseph Bulger in the 1950s. Dense ferns populate the mouth of the cave.

You see, Smallin Cave may have been used by folks since time immemorial but for the last 30 years this place — one of the most magnificent cave systems in the Ozarks — has been largely forgotten.

All that changed not long ago when Kevin and Wanetta Bright — originally from the rugged Ozarks near Mountain View, Missouri — purchased the property and opened Smallin again to the public.

PLATE 4. A close-up view of the rim above eight-foot-deep Emerald Pool.

In the 1950s, Joseph Bulger bought the property, changed the name from Smallin to “Civil War Cave and Museum,” and began charging admission.

Who does he think he is? was the general sentiment of the Finley River and Parch Corn Holler community. That’s not Bulger’s cave. That’s Smallin’s Cave!

You see, the Smallin family homesteaded this patch of land in the 1850s. Smallin Cave became a center of the growing pioneer community. For generations folks came to the cave for Monday-morning-clothes washing, for Sunday-after-church-picnicking and through-the-week berry picking.

Bulger locked them out, charging admission to everyone. “During the Civil War,” wrote Bulger in a promotional brochure, “this cave was used as a munitions warehouse by the Union Forces. Their powder kegs and cannonballs were placed far back into the cave safely hidden from marauding Confederate raiders. The ammunition was used by General Lyons Union Forces at the bloody battle of Wilson’s Creek on August 9, 1861.”

Ninety-five year-old Parch Corn Holler resident, Miss Kathryn (Wills) Parsons remembers her grandmother scoffing at the notion of Union troops hiding at Smallin. “Funny how all those soldiers managed to stay a secret with us washing our clothes there every Monday,” her grandmother had said.

Nonetheless, Civil War history — too often ignored in this area of the Ozarks — is abundant in the hills around Smallin Cave. Union forces, specifically the 14th Missouri Cavalry Militia, were based at Camp Brown just one and a half miles south (on the outskirts of then-village Ozark, Missouri). History notes Union pickets extending near the cave. A nearby bluff on the Finley River is apparently pockmarked with cannonball fire.

The Battle of Ozark. Missouri took place in early August 1862.

For these Ozark hills, the 1860s were an era of spies and bushwhackers, regular skirmishes and unclear battle lines. Many stories devolved from fact to folklore as the years passed.

What is undeniable, however, is the rich history of the Civil War in the community — a community oft-centered around Smallin Cave.

PLATE 6. Indian Staircase. Carved footholds are seen on the far right of the formation.

Joseph Bulger did provide a lasting contribution to Smallin Cave, however, in the form of a series of concrete walkways allowing visitors to appreciate the natural beauty without wading through deep water or damaging fragile rimstone dams.

You see, Smallin is a rain-dependent cave. After a heavy rain, the cave becomes a river. The dramatic entrance — one of the largest cave entrances in the world — blooms with ferns. Green tufa adorns the walls, shading to massive white formations.

Turnip-shaped stalactites extend from a roof adorned with sea-creature fossils. “It just reminds us that there was a day when God turned the world upside down,” notes Kevin Bright, pointing out an evactinopora (or starfish) fossil, as well as the likely track of a sea snake.

Today, the crinoids, sea snakes and starfish are but reminders of a past age, replaced by mink, foxes, raccoons, salamanders and the rare bristly white crayfish.

PLATE 7. Rimstone near the Emerald Pool and Indian Staircase.

Partway through Smallin, a series of deep pools and rimstone dams blocked further passage for generations… unless you scaled the Indian Staircase, a remarkable calcium deposit rising from the right side of the cave. The deceptively deep Emerald Pool blocks passage to the left. The Staircase is so named for a series of footholds carved into the limestone, most likely by the Osage.

Years of graffiti also adorn the Staircase. The oldest date thus found on the Staircase is 1849. Many forms etched into the stone are likely much older. These etchings are an invaluable record of human interaction in this cave.

For generations, Native Americans made Smallin a camp. A 230-year-old black walnut tree at the head of the holler stands, a marker tree for the cave, likely evidence of the Osage’s presence. In fact, it was an Osage guide who led explorer and geologist Henry Rowe Schoolcraft to the cave in 1818. “We seemed suddenly to be beholding some secret of the great works of nature which had been hid from the foundation of the world,” Schoolcraft would later write.

PLATE 8. End of the trail deep within Winoca.

The Indians would not venture into the darker recesses.

A fitful wind tussles the dry oak leaves at my feet and the fire flickers. The sound of murmuring water like voices is on the air. This beautiful cave is truly haunted… not by ghosts but memories.

Smallin Cave: State of the Ozarks