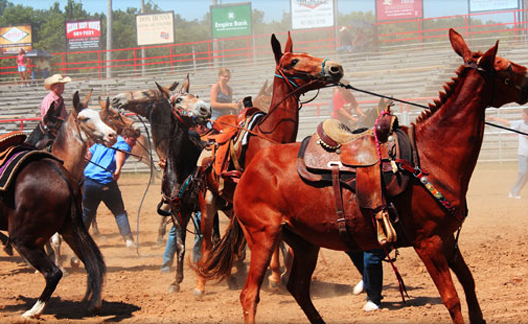 A long, hot dusty furrow. Summer sun beating down. Heat rippling the blue hills beyond. A bony old mule labors for a Missouri farmer, weathered lines of his face matching the ribs showing on the animal. Creak of leather, soft pad of foot and hoof. 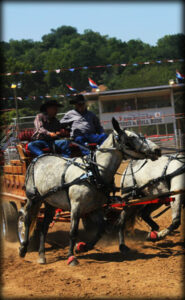 It is an image of now-gone rural America — a scene once dominant across the Upper South of Missouri, Kentucky and Tennessee.

Contradictory symbols of a backwards past — a bygone era of hard work, respect — a simpler, gentler time. The mule is a dependable animal and — as Missouri became the gateway to the Great American West — our state became a center of mule breeding. Plain-spoken Harry S Truman is recorded as saying, “My favorite animal is the mule. He has more horse sense than a horse. He knows when to stop eating—and he knows when to stop working.” 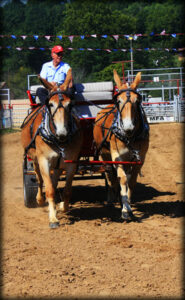 Truman served as president from 1945 until 1953. It was a bright, heady time for the United States, despite the horrors of World War II and our involvement in Korea. Modernization was here in force, a nation’s workforce moved to urban areas by the war effort. The suburbs were created. Local economy slowly lost strength.

Agriculture shifted. Small farms dwindled. Machinery replaced animal power. The mule became a symbol of an archaic time — when living off the land was woefully old-fashioned.

Stubborn. Dumb. Modern America stereotyped rural life — just as the impatient and unitiated continue to stereotype the mule. Dumb animals. Stubborn animals. Dangerous animals. “A mule will labor 10 years willingly and patiently for you,” wrote William Faulkner, “for the privilege of kicking you once.”

A wider gap grew between “modern” America and the backward Ozarks.

We deride that which we do not understand — and America was rushing away from rural life. Today, many don’t even know from whence mules arrive — you cross a donkey with a horse. More specifically, you cross a jack donkey with a mare. Mules closely resemble their mamas, looking decidedly horse-like except for their big donkey ears. As cross-breed hybrids, most are sterile (so don’t bother trying to breed one mule to another). 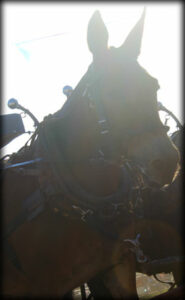 “A mule has neither pride of ancestry nor hope of posterity,” wrote orator Robert Green Ingersoll (1833—1899).

The mule’s legendary stubbornness? A renowned sense of self-preservation. An abiding knowledge, phenomenal memory, an intelligence that would surprise most. Mules are smart critters, knowing, just as Truman noted, when to quit eating and when to quit working. A horse can eat itself into colic — or work itself to death. 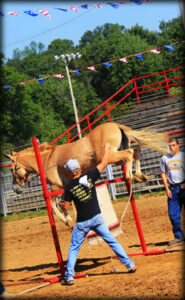 Couple that with exceptional longevity (many live past 40 years of age), great sure-footedness (inherited from the donkey) and the physical power of a horse, and its not hard to see why some folks have downright fallen in love with these animals.

And its a good thing too. Because of the hard work of mule breeders across the country, mules are thriving, particularly here in Missouri.

Did we mention they can jump? With grace likened to that of a jackrabbit, mules can sneak up on a tall fence or gate, size it up, and leap over as though the obstacle practically wasn’t there at all. An integral part of Ozark culture, mule jumping is something to see. Pea Ridge, Arkansas, has its own mule jumps and Ozark, Missouri, celebrates with the Ozark Mule Days.

“What do mules do at a rodeo, anyway?” 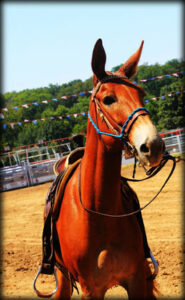 Then there is the fancy stuff like competitions in open gaited, halter, and Western pleasure classes.

Squeezed in between is the crazy stuff the crowds love — boot races in which barefooted riders must retrieve their boots while their mules are spooked (Plate 1), egg and spoon (circle the arena at a trot while balancing an egg in a spoon) and the balloon race (an all-out muleback brawl where competitors attempt to pop balloons pinned on one another’s backs). 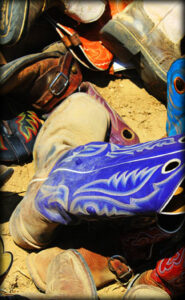 Without a doubt, Ozark folks love their mules — for mighty good reason.

And Absalom met the servants of David.

And Absalom rode upon a mule,

And the mule went under the thick boughs of a great oak,

And his head caught hold of the oak,

And he was taken up between the heaven and the earth;

And the mule that was under him went away.”