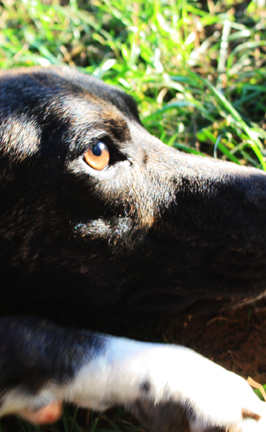 I had wanted a dog for years — well, it seemed like years anyway — but Dad wouldn’t hear of it. He said he didn’t want another mouth to feed. But then Tip came along and decided he would live with us. Well, sort of live with us. Let me explain. Tip showed up in our yard one hot afternoon in the summer of 1953. I heard a commotion and upon further investigation discovered our champion red rooster involved in a confrontation with a strange dog. Like many conflicts in the animal world, this one appeared to be over food. Apparently the dog had been helping himself at the chicken feeder and the rooster was protesting, trying to get his spurs into play.

Ignoring the rooster, the dog walked up and placed a paw on my boot. As he calmly looked up I did the only thing that seemed natural at the time: reached down and gave him a few pats on the head. This must have been the response the dog expected for he hopped up on the front porch and stretched out for a nap. I suppose, in his mind anyway, some kind of deal had been struck.

For reasons that I still can’t explain — even after all these years — I knew this dog was special. He was smallish, with short hair and intelligent eyes. There were no distinguishing marks to set him apart; nothing about him suggested any breed I was aware of. But somewhere in his pedigree there had to be royal blood; I just knew it. Strained down through multiple generations and mixed with no telling what, the good stuff must have regrouped and manifested itself in this one dog.

I spent most of the afternoon conjuring up a good case. I even practiced on Mom. She liked the dog as much as I did and promised to serve as a character witness if it ever got that far. Right after supper, when Dad’s resistance was at its weakest, I brought the dog out of hiding. Although I staged one of my best performances to date, failure appeared imminent. Dad countered every point with skill; he wasn’t about to buy into this deal. “No dog,” he said with finality. “Especially that dog. Now, go fetch wood for the cook stove and feed the chickens.”

That should have been the end of the matter. Dad didn’t make a habit of reversing a decision. However, before we knew what was happening, the dog pulled a stick of wood from the wood pile and carried it to the front porch. As we stood gawking, he repeated this procedure until a small stack had appeared in the wood box.

“How about that?” Dad rubbed his chin thoughtfully. “I guess he can stay for a while.”

I named him Tip for no particular reason. He fit smoothly into the family routine, and in no time was helping with most of the chores. Besides keeping the wood box full, he would fetch about anything we sent him after. He would even perform tricks for us as we sat on the porch in the evenings. My first impression about the royal blood became more and more apparent. This was no ordinary dog.

No one claimed him, so after a couple of weeks, we figured he belonged to us. Dad made a collar out of an old piece of leather strap and with a sharp carving tool he carefully engraved the family name.

Tip seemed to be content; therefore, it took us by surprise when he suddenly disappeared. We had become almost inseparable and when he didn’t meet me after school at the bus stop, I knew things weren’t right. I searched everywhere and it was after dark before I gave up. “Don’t worry,” Dad said. “Dogs behave like that occasionally. Probably found a girl friend.”

A few days later, the mail man stopped long enough to give Mom a bit of news. “Saw your dog,” he explained. “Over at the Garver place. Looked like he was helpin’ old man Garver get the cows in.”

That same night, following supper, we headed over to check it out. It was Tip alright; I spotted him asleep on the front porch. When he heard our old truck rattle up, he bounded off the porch and set in to barking like we were intruders. After a few seconds, he recognized us and looked ashamed, like he’d been caught sucking eggs.

“Showed up a couple days ago,” Mr. Garver croaked, through his ancient beard. “Bout’ noon I guess; and he was hungry. Settled in like he owned the place. Smart little feller too; helped me with the cows. He shore did brighten things up around here. I had a mind to keep him; didn’t know he already belonged to someone.”

We made the return trip sitting together in the back of the truck. “Why’d you leave, Tip,” I stammered, near tears. “I thought we were buddies.” He wouldn’t look in my direction; he stared back down the road as if he hadn’t heard.

I treated him extra good the next few days and made sure he had plenty of food and water. He acted strange though and many times I’d catch him standing still, staring in the distance. Something was bothering him; I just couldn’t figure out what it was.

A week or so later he left again, this time during the night. The next morning I wanted to head to the Garver place but Dad wouldn’t hear of it. “Forget him—if he don’t like it here, that’s fine with me.” Dad had that look; his stubborn chin was jutting forward, and his jaw was set. It broke my heart, but what could I do? Mom promised me another pet, one that would stay put, but I wanted Tip.

This time, it was a local veterinarian who brought the news. “Your dog’s at Bessie Gimlin’s house,” he stated. “She said she was fixin’ to shoot him, but decided at the last minute to hold off.” Mrs. Gimlin was a widow who lived approximately 20 miles down the road; the opposite direction from the Garver place. She was considered to be a bit odd.

It took all the persuasion that Mom and I could muster, but we finally got Dad to agree to make the trip. Tip had just finished a meal of steak and gravy when we drove up. I could see disappointment in his eyes when he recognized us and for a minute it looked like he might break and run. The widow was disappointed too. “I like him a lot,” she yelled (she was practically deaf). “The only dog I ever wanted to keep.”

The trip home was a somber affair. Tip made it plain that he was sorry he had been found. I was practically in tears. “What’s wrong with you?” I yelled over the sound of the wind. “Why can’t you just be normal and stay put?”

Some 50 years later, as I relate this story, I can still feel a poignant stab of pain. I recall it all, as if it were yesterday. Tip stayed only a short time and was gone again. This time Dad could not be persuaded. “Get it through you head, son,” he said. “That dog don’t want to be found.” Although it broke my 10-year old heart, I finally reconciled myself to the fact that this would never really be my dog. 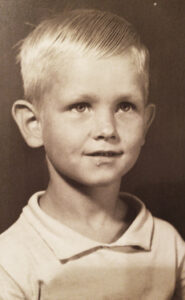 Occasionally, we would get word from varying sources. Once, Tip was spotted at a Conoco Gas Station in a nearby town doing tricks for a crowd of children. After that, he lived with a retired actor for a few weeks in a beautiful mansion near a large lake. The last we heard, he was staying at a nursing home. It seemed the residents fell in love with him, just as I did so many years ago. I’ve always hoped that he gave up his wandering ways and finished out his days there.

I was in my early 20s before I fully understood. Much to Mom and Dad’s dismay, I couldn’t stay put. For several years I drifted from place to place, searching for I knew not what. There were times, during those days of wandering, that I could feel a kindred spirit. I think it might have been Tip, urging me to see what was over the next hill.

Johnie Groves, author of Tip the Wander Dog, was born in Branson, Missouri on Febuary 13, 1944. He grew up here in the Ozarks, and joined the U.S. Air Force after graduating from high school.

He then finished college and spent his career working as an engineer for Bell South telephone company in Biloxi, Mississippi.

After retirement, he moved back to the Ozarks. He and his wife, Julie now reside in Branson. He is a private pilot, and he spends a lot of time flying his Cessna over the beautiful Ozark Mountains where he once roamed as a lad. Photo courtesy of Johnie Groves.

Tip the Wander Dog is the property of Johnie Groves. The story is reprinted on State of the Ozarks with permission.