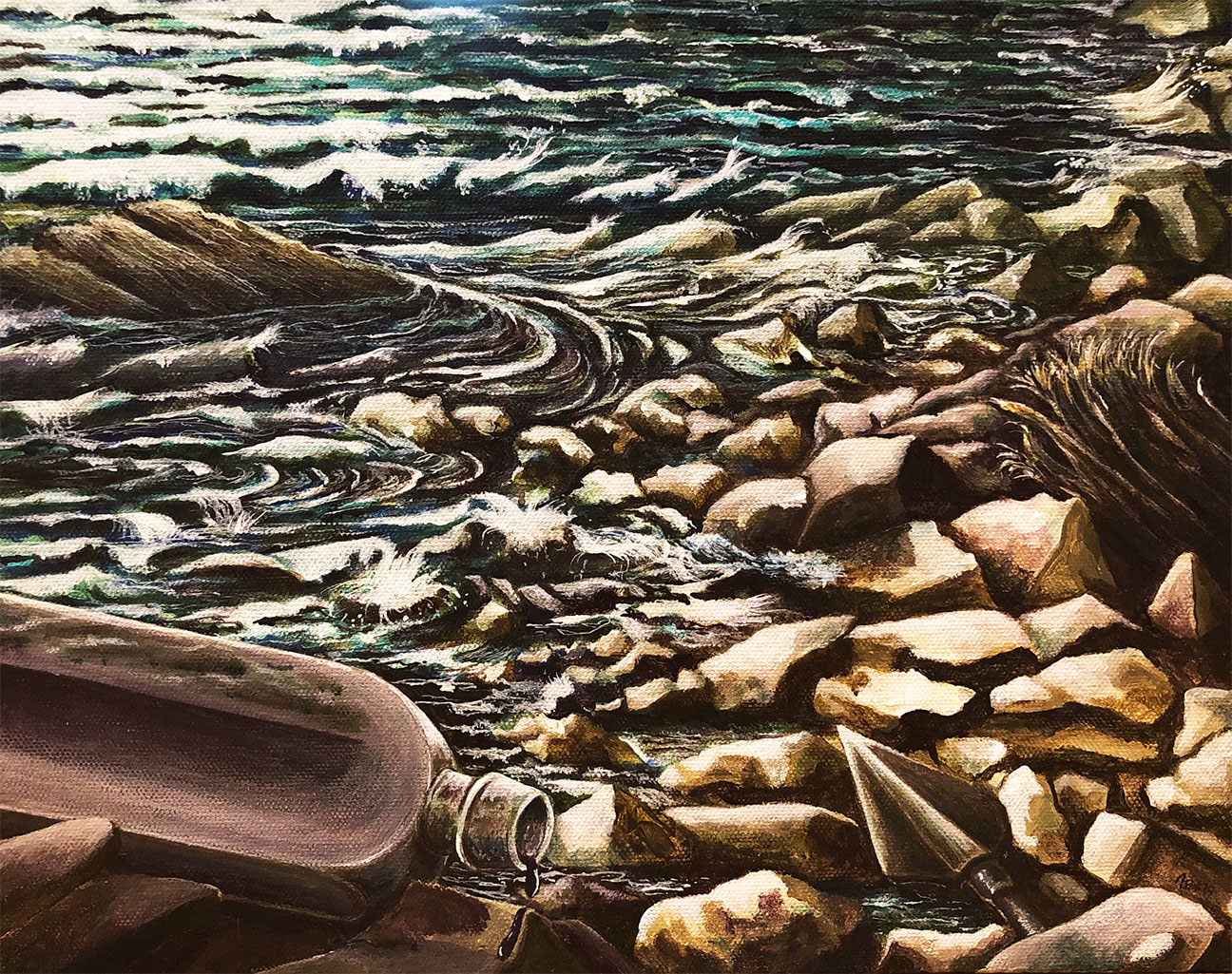 The river was clear to the bottom. The rocks resting on the riverbed were worn smooth by the eternal current, through which small fish darted like unaimed arrows. Between the banks and beneath the reaches of the alder trees, a keelboat floated slower than the river’s currents, its sail tied fast, a middle-aged man half-heartedly minding the tiller while some young boys stayed at the oars. Leaning on the deck, a man with long black hair drank dark liquid from his glass as he gazed nowhere. A woman lay against the hull, her finger trailing in the water as her eyes shifted from the riverbed to the alder trees, then back again.

“Come over here,” said the man.

“Invermeinos,” the woman said, “is easier to see from here.”

“It’s water and rocks and fish.”

“Your mother said that your father was saved by Ismenos, when he almost drowned here. I wonder if he’s still here?”

The man laughed. “My father liked to tell stories more than he liked to rule Oizyana.” His voice was heavy, like leaves soaked with mud. “Ismenos. Now I know where Alastes gets it from—you soak our son’s mind in your sinskian mother’s milk.” He laughed again, a short laugh.

“You don’t think they are real, Agonus?”

“Eh? Real? Huldorfolk? I’ve never seen one. I told you that.”

“You did, but you used to leave gifts for Ismenos and Ismene and their children, once…”
She heard him smash his drinking vessel on the deck and stand to his feet clumsily. He was a big man, and the keelboat shifted under his weight as he walked to the stern.

“Ismenos, you drooling bastard, are you out there?” he shouted. For an almost imperceptible moment, the water seemed to grow quieter. “Ismenos! Come have some wine with me!”
“You sound like a fool,” said the woman quietly.

“You shut your mouth,” snapped Pepromene. He looked back at her, surprised. He shrugged.

“Well, whatever. No wine for Ismenos.” Agonus laughed. “Too bad Keres isn’t around. That boy knows how to have a good time.”

Disgusted, Pepromene turned away, staring hard into the trees. Things had been otherwise, before the war and before Agonus had decided to set up advisors as potential regents for new heirs. “My little king,” he had called his first boy. She couldn’t blame him for hurting, for mourning. An act of treason like that could shake anyone to the core. But he had changed. She watched the young man who had wooed her melt away like snow before a creeping fire. He never liked the water; as a young boy his clubbed foot had made swimming feel like torture and he could never quite overcome that initial fear, which became all the more painful with his father’s love for the waterways. For a while, Agonus seemed to take some joy in being on the water like this, maybe to remember. But now…

“I don’t understand why we come out here anymore, if it only makes you angry,” she murmured.

“Angry? Eh?” He laughed, and she could feel the boat move again as he clomped to the keg of wine, filled a new glass, and guzzled it as he ambled back to the stern. The sound of shattering made Pepromene flinch.

“Would you stop?” she retorted, not bothering to look.

He was quiet for a while. Then he started to hum.

“I’ve drunk a lot of wine,” he observed.

“A master of self-awareness,” she offered dryly.

Agonus laughed. Silence deepened around the bark of that laugh. Then there was a loud bubbling sound, water meeting water, accompanied by a satisfied groan. Pepromene jolted and turned, and couldn’t believe her eyes. The keelboat’s crew gasped, and their voices began to breeze in furtive concern.

“Damn it Agonus, that is too far. If you don’t want to give a few crusts of bread to honor tradition that’s fine, but just because you can’t hold your piss doesn’t mean you need to be so damn obscene.”

“Don’t say damn it, damn it,” guffawed the king as he finished his task. “Doesn’t befit a lady.”
Pepromene felt her stomach twist. He would just never understand. Her mother was a senska, just like his father had been, and she…

The boat lurched to a halt as the sound of something big hitting the hull of the boat screeched. Agonus swore at the crew, but they were scared and nonplussed. Nothing was big enough to bottom us out in this river, they insisted, except, well… They stared at him with as much accusation as they dared give an angry and drunk king.

Then the sound of rending came from the river bottom past the stern, and the keelboat rocked as waves crashed and threw stones from the rockbed into the air. The skipper and his boys were shouting at each other in confused panic, and Pepromene was frantically trying to calm them down, but Agonus was standing stock-still, staring over the stern with a silent gaze. One by one, the other passengers noticed and looked, and there they saw him. The waters hovered around him like a shield, his feet and legs disappearing into a wash of the river’s waves, his arms held diagonally and his palms flat. His eyes were deep and his skin a soft blue, his face a coastal storm. Fih flicked up and down in the thin sheens of water that floated above his slight body, as if they could sense nothing amiss.

“Agonus Anaideius, once-friend of the fairy folk, your insults are at an end. Crenaeus, son of Ismenos, is my name, eldest of his children and sovereign over the river where it flows through your lands. I retract the blessing of my people from your kin’s use of these waters, and death shall meet any of Oizyana’s people who come between the river banks. Be gone.”

Agonus stared, still as fallen stone. Then he laughed.

“You? You, you little whoreson and whelp of a pathetic river demon, claim sovereignty here? Here?” His voice cracked and his brow furrowed. His dark eyes blinked darkly, and his laugh was shadow. “Here. You’re real, damn you, and I’m no sanska. You’re real. You bastard, how dare you be real?”

The river spirit seemed shocked at the king’s rage. He was responding, but Agonus, spitting curses, dipped down to the deck, then stood, hefting a spear.

“You want tribute, false god? You want offerings and worship? Bring this to your father as he could not be bothered to bring a real king his son!”

Crenaeus at first did not react, perhaps not imagining that this could be the outcome of his sovereign decree. Pepromene cried against the deed, and as Agonus threw the spear at the fairy creature she slammed into him, his arm thrown ajar, but only a bit. The spear was strong with the weight of his throw as it split the air and the waters, and that spear forged by a people wise in the hidden ways, though amiss, was not without gain. Through the young soft skin of his face it penetrated and into the pulsing gills it tore, ad back his whole body fell, a young lord’s voice raised and railed against the wrong, and he dove shrieking into the waves with his father’s name upon his lips.

Stillness, and then as a bowstring stretches tight and snaps, the river seemed to widen, the trees to lean away, the clouds covering the riverbed and forth stormed the waves. Like gates to the earth’s center, the river opened, and tall in the ebb and flow of ancient waters was a dark form, eyes that went far filled with a hating fury, a staff in his hand and a cloak like fins about him as the waters cascaded around, there stood Ismenos. He roared of trachery and justice, a statesman silencing the unrepentant crowds, and with him were the slight spirits at his call. In the roaring surge it could be heard.

“Like wine, the blood shall flow, and like rivers, this land shall be lost to storms of seas.”

Then the waves lifted like the wings of an airborn predator, and Ismenos and Intermeinos swept over the keelboat, and took it down to the riverbed. When it was ended, the gentle river flowed on.