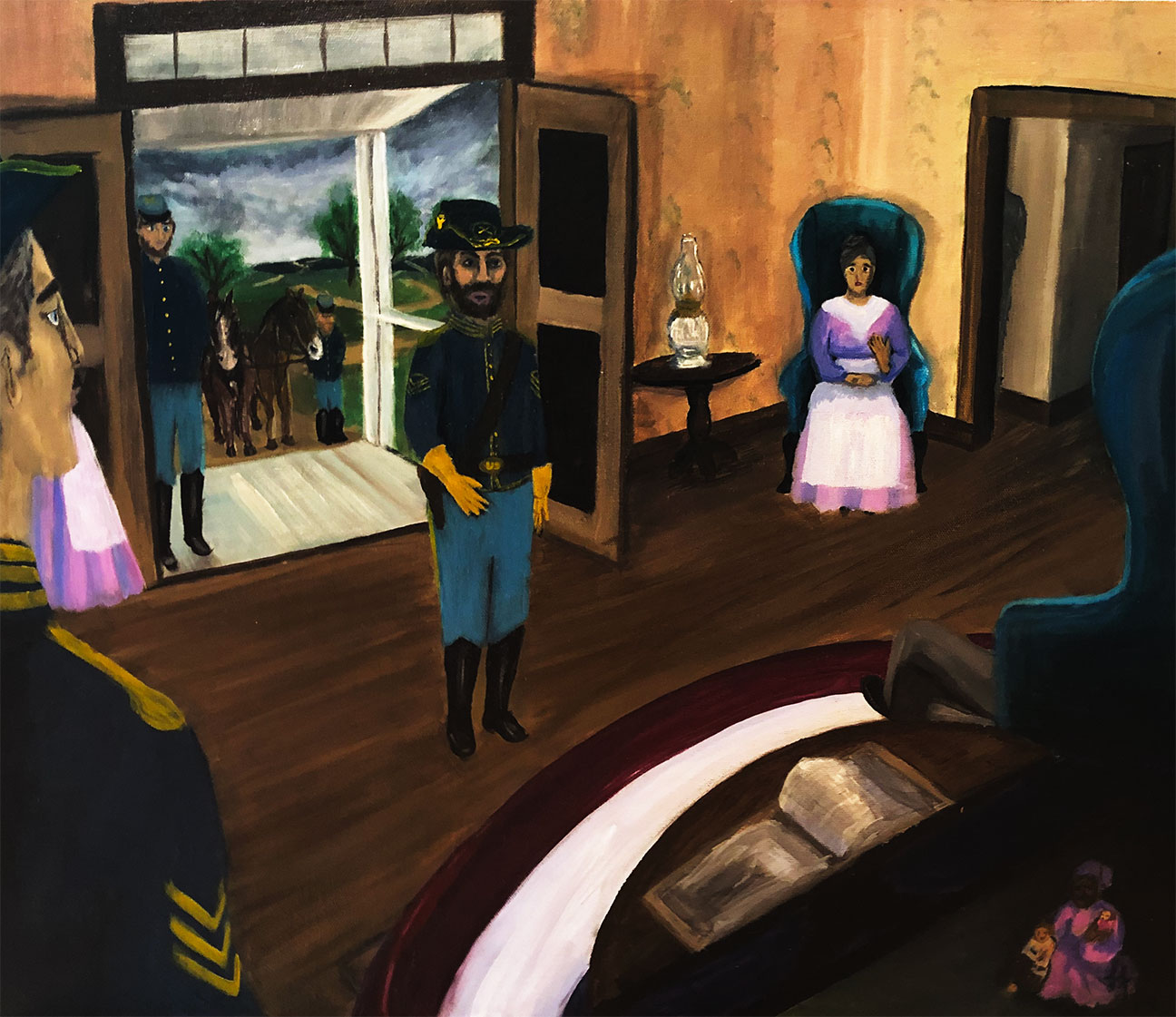 “Federal riders!” Willie yelled as he came through the back door, stopping in the hallway, hands on his knees, gulping air.

Elizabeth looked at William and he nodded. Neither questioned whether their seven-year-old grandson was mistaken. Elizabeth turned to Elvira, “You take the children and hide.” Elvira shook her head, not stopping her rhythm, bouncing the baby on her shoulder. “They want Joshua. We have always cooperated with both sides. I’m more useful up here with you.”
Elizabeth gave her daughter-in-law a stern look; but did not have time to argue. “Rose!”

Rose came from the stairwell, smoothing her dress. “Yes, Ma’am.”

Rose pulled up her chin, straightening to her full height, which at 13, almost matched Elizabeth’s. “Miss Elizabeth, I want to stay with you.” She lowered her eyes, wondering if she was too forward.

Elizabeth put a finger under Rose’s chin and lifted it to meet her gaze. “I promised your mother I would take care of you before she died, and I will not let her down now.”

Rose nodded, taking the sleeping baby from Elvira. William was already pulling the floorboard planks up where they had cut a trapdoor in the parlor after the Federals commandeered the house as a field hospital during the Battle of Carthage. Willie scrambled into the open hole, feet first, as if he were jumping into the river for a swim. William held Rose’s arm and steadied her as she descended into the darkness, baby Sarah on her shoulder. He slid the planks back into place. Rose heard a loud pounding on the front door as the rug was pulled back in place and the side table placed on top.

Elvira opened the front door, “How may—”

Rose heard boots push past Elvira, “Where’s Joshua?” The man’s voice was loud and had the tone of being used to getting his way.

Rose looked at Willie, putting a finger to her lips. She moved to her left to see through the slit between two floorboards. She heard William cross his legs in the chair above.

“Pursuant to General Order 11, all able-bodied men in western Missouri must take an oath of allegiance to the United States government or be remanded to the Gratiot Street prison in St. Louis, as prisoners of war.” Multiple sets of bootsteps came into the parlor. “And we know Joshua served in the initial enlistment with the Confederates.”

“Sergeant, my son is not serving anyone. We have always cooperated; however, you have asked us; and provided our blacksmithing…and gunsmithing services as asked.” Elizabeth’s voice was calm. Sarah stirred on Rose’s shoulder.

Boots strode to stand in front of William. “While that is true, and personally appreciated, I have orders which I can’t ignore. Where is he?” William slowly bounced the foot crossed over his knee. Rose held her breath as the silence stretched on.

“Where is your son?”

Rose was sure William heard him, despite his being hard of hearing. Sarah moved and sighed. Rose shifted the baby into the crook of her arm.

The Sergeant pulled his pistol from its holster. “I’m not asking again.”

“What? What you say?” William said in a confused tone.

Another set of bootsteps moved past the chairs toward the fireplace. Rose wondered if he had noticed the trapdoor, but she couldn’t see anything out of place in the dark.

The sound of the rug being flipped up caught Rose’s breath in her throat. Willie’s eyes widened but he was silent. The floorboard planks were pulled from their spots. Rose motioned for Willie to move further under the house. Light streamed through the open hole before Rose could retreat. Sarah blinked and inhaled to cry. Rose squeezed Sarah’s nose, forcing her to open her mouth to breathe instead of crying. Rose looked up to see Mr. Robinson, in a Union uniform.

The cocking of the gun sent a reverberation through the air. Elizabeth rushed toward the gun aimed at William’s head, putting her thumb under the hammer, stopping the gun from firing. “Arrrr!” The Sergeant turned on his heal toward Elizabeth. “I’ll burn this damned house to the ground, you in it.”

“Shut up, Johnson. Our business is done here.” Robinson didn’t break his gaze with Rose. “Get him out of here.” Boots scraped across the floor pulling Johnson to the door as he complained. Sarah’s pale, tiny hand clutched at Rose’s dark finger.