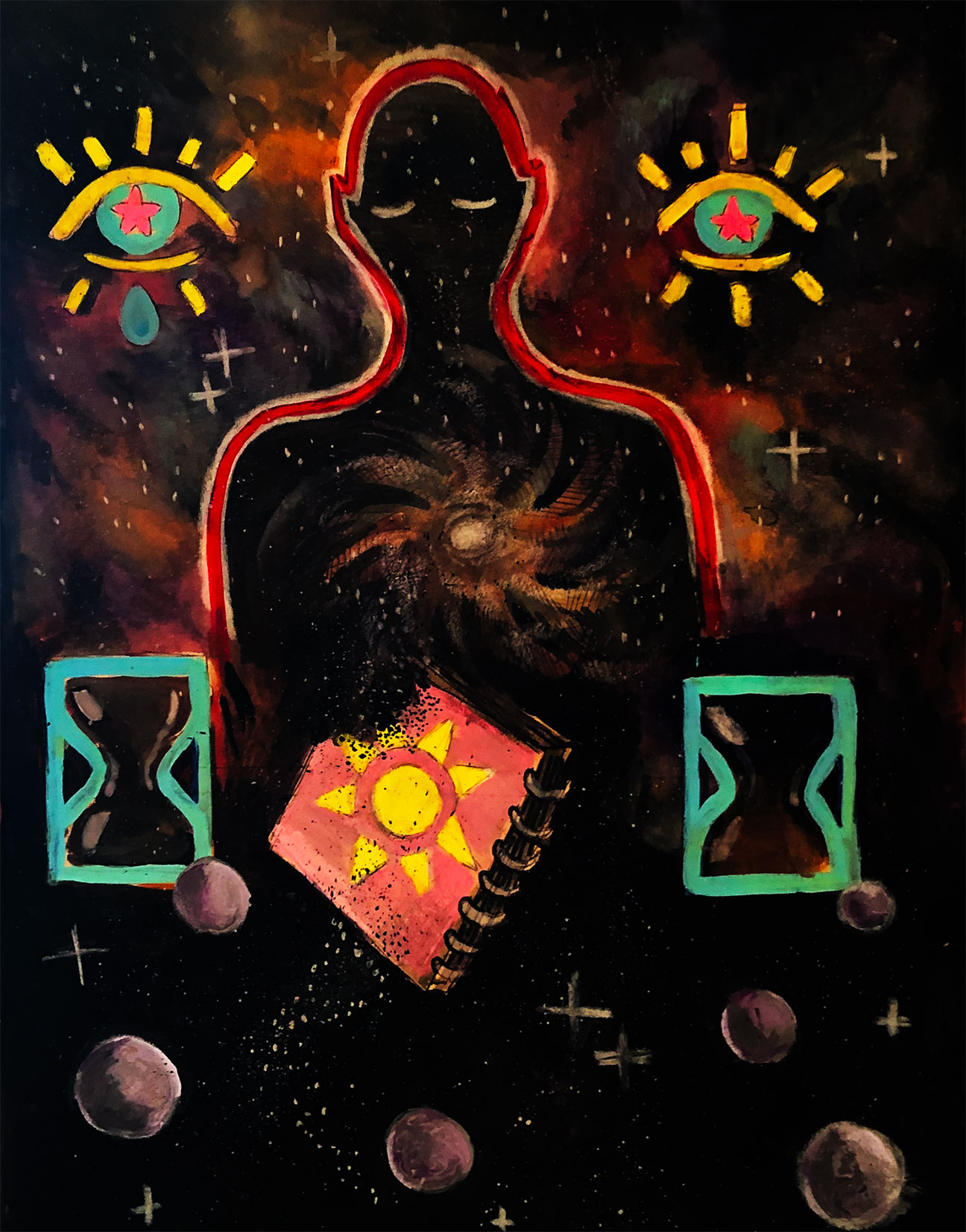 Perhaps you now live in a different world that I can’t reach because it’s a speck of dust. Maybe that’s what my world is too. A little piece of dust that you don’t exist in any longer. Maybe the universe is just made up of dust and you’re somewhere else and that’s why I can’t reach you.

If that’s true, does that mean when I die I’ll get to join you in the world that you exist in or would I be in a completely different galaxy of dust, never to see you again?

I hope that when my time here is done we’ll meet again. That would be nice.

The woman gently sat down, her daughter’s journal in her hand, keeping the page marked by her thumb, gazing at the sleeping teen with sorrow.

Her sweet daughter had been quiet as of late. She had worried that the girl was falling into a depression, which could still be likely, but she could see now that her daughter had been attempting to cope with the loss they both had suffered through silence.

Her daughter was attempting to make sense of the senseless.

The mother scanned the entry again, grimly smiling at how reading her daughter’s journal led her no closer to helping the girl come back from the anguish that began months ago.

A cry from the bed had the mother looking up at her daughter, seeing that her features were troubled by dreams. Something the mother knew all too well, for it was one of many reasons for her being in the young girl’s room so late at night.

The woman smoothed her hand over the child’s hair, thinking of him, and if a few tears passed while comforting her sleeping daughter, no one need know.

She continued to smooth her hand through the young girl’s hair, mindless now of the comfort she was offering. She thought of the loneliness she felt trapped in, wishing many impossible ideas.

She thought further of what her daughter had written. To contemplate death and the afterlife seemed such large topics for so young a girl, but the mother understood that death is what her daughter could only think of since it permeated everything now. School, home, friends, sleep, and especially the relationship they had with each other. Death seemed to be the only sense to be recognized due to the constant ache.

The young mother, so perturbed by her thoughts, had slackened her hands, one resting on the crown of her daughter’s head and the other relaxing just enough to have the journal fall to the hardwood floor with a clatter. She winced at the noise, picked the journal up from the floor, closing it and pressing her hand over the cover.
“Mom? What are you- is that my journ-Did you read my journal?”

The mother startled, realizing she wasn’t the only one awake anymore. She turned towards the girl, seeing the sleepy confused look her daughter gave her, “Sweetie, I…yes. I read your journal. I’m sorry, I shouldn’t have.”

“Why did you do it then?” the girl asked, sitting up and beginning to rub the sleep out of her eyes,

“…I couldn’t sleep… and I was worried about you. About how you’re dealing with da-…about how you’re dealing. I saw your journal and thought it might give me clues on how to help.” the mother replied, taking time to note that her daughter didn’t look particularly angry by the intrusion of privacy.

The girl went silent for a moment, looking down at her lap where her hands rested, cupped into one another, noting how they seemed to trademark grief, as if her whole being could not escape loss.

“Well?” the child whispered down at her grief-soaked hands,

The young mother placed the journal on the covers of her daughter’s bed, taking the time to sit in silence, also noticing but not sharing the insight that her hands too seemed to carry grief within each weathered line.

The girl felt no words come. She didn’t know how to convey what she felt, what she didn’t want to feel, only that it seemed to swallow her whole and she didn’t know if she would be able to surface from the bleakness.

“I’m tired mom, I’m going to go back to sleep. You should too. It’s late” came quietly through the chasm of small space between mother and daughter,

“Yes, that’s a good idea” the mother stood up, looking back at her daughter, “Night sweetie. I love you.” she stated, trying to convey everything within those small words and when that wasn’t enough, touched the child’s cheek and silently left.

Tears slipped silently down the heart shaped face, the light from the bedside lamp catching each new path created or renewed by the salt. Words were forming on her lips, she could feel them bubble up from her throat,

Outside the young girl’s room, a mother slid to the floor, grief trailing down her face, knowing that her heart reflected that of her daughter’s. Broken.

In the dust, a father wept.